by Cindy Wooden, Catholic News Service
People
This article appears in the Francis in Thailand and Japan feature series. View the full series. 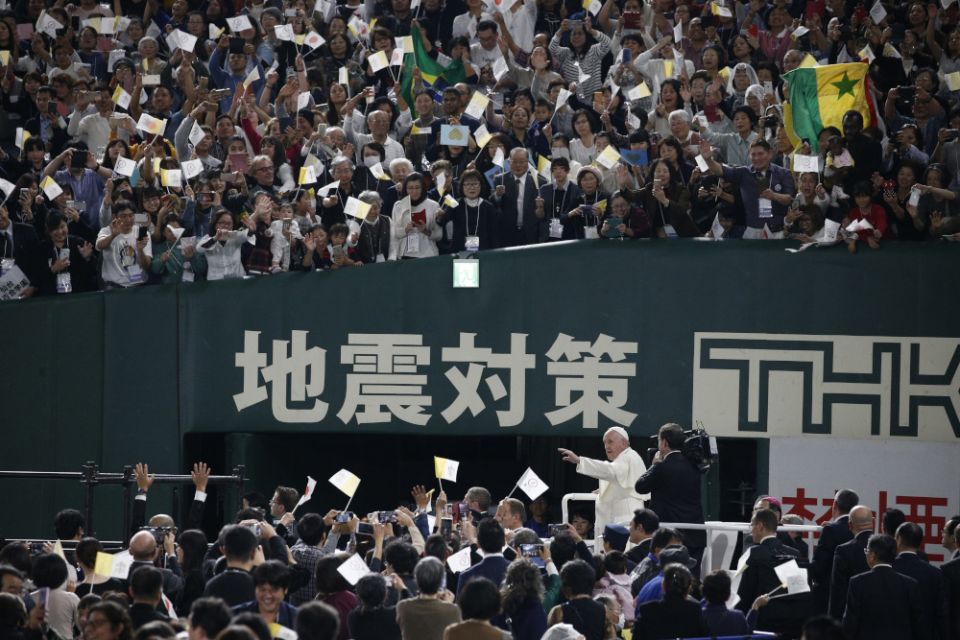 Vatican City — At the end of his trip to Thailand and Japan, Pope Francis said he found truth in the saying, "Lux ex oriente, ex occidente luxus," or, as he roughly translated it, "the light comes from the East, and luxury, consumerism from the West."

Not wanting to be too harsh on the West, Francis told reporters returning to Rome with him Nov. 26 that he did sense in the two Asian countries a different concept of time and a greater sensitivity to contemplation than he found in the West.

"I think we Westerners need to slow down a bit," he said. The "culture of hurrying" often means losing the ability to contemplate and that, in turn, means losing sight of beauty and poetry.

Francis' own trip to Japan was delayed by decades.

Several times during his stay Nov. 23-26, he spoke about how, as a young Jesuit, he had hoped to be sent as a missionary to Japan. His superiors thought that with his history of lung problems, he was not healthy enough.

So, he did not make the trip until he was pope, almost 83 years old and about to celebrate his 50th anniversary as a Jesuit priest.

With his visit to Thailand Nov. 20-23 before going on to Japan, Francis flew more than 16,000 miles and gave close to 20 speeches. He celebrated a small Mass with his Jesuit confreres in Japan and Masses with tens of thousands of people in stadiums in Bangkok and Tokyo. He met the Thai king and the Japanese emperor and used as his official translators a nun who was his cousin and a Jesuit who was a former student.

The formal and the personal came together in a special way Nov. 24 when he visited Nagasaki and Hiroshima, the two cities destroyed by the U.S. atomic bombings in August 1945.

In Hiroshima, the pope heard the testimonies of an elderly woman and an elderly man who were teenagers when the bombs fell. On the flight back to Rome, he told reporters that it was "a real human catechesis on cruelty, cruelty."

After the sun had set at the Hiroshima Peace Memorial and after the pope had laid a bouquet of white orchids and prayed in silence, he said, "With deep conviction I wish once more to declare that the use of atomic energy for purposes of war is today, more than ever, a crime not only against the dignity of human beings but against any possible future for our common home."

"The use of atomic energy for purposes of war is immoral, just as the possessing of nuclear weapons is immoral," he continued. "We will be judged on this. Future generations will rise to condemn our failure if we spoke of peace but did not act to bring it about among the peoples of the earth."

On the flight back to Rome, Francis signaled that he considered the speech to be a formal part of church teaching, often called "the magisterium." He said the immorality of the use or possession of nuclear weapons should be added to the Catechism of the Catholic Church.

In Nagasaki he also decried the horror of what happened and pleaded with government leaders to get serious once more about arms control and disarmament.

The use of nuclear weapons is not the only threat the arms pose, he said, pointing to the billions of dollars spent each year on maintaining nuclear stockpiles and developing new weapons when millions of people are starving and dying in poverty.

But Nagasaki also was the site of the martyrdom of St. Paul Miki and 25 others in 1597, the first of hundreds of Christians persecuted for their faith over the course of close to 200 years. The pope told people gathered at the martyrs' memorial that the story of St. Miki and other Jesuit missionaries sparked his youthful dreams.

Care for one another and care for the environment were recurring themes in both Thailand and Japan, where the Catholic communities make up less than 1 percent of the populations, but where they exercise significant influence, especially in the field of education.

While Francis described himself as a "missionary pilgrim" and encouraged Catholics in both countries to be "missionary disciples," he made it clear that he was not talking about preaching on street corners or passing out pamphlets.

Missionary disciples are experts at dialogue and witness – both done with immense respect for the other's religion and culture, he said repeatedly throughout the trip.

In Thailand to celebrate the 350th anniversary of the Apostolic Vicariate of Siam Mission, Francis said the first missionaries to the country discovered that they were not among strangers, but among brothers and sisters they hadn't realized they had.

"A missionary disciple is not a mercenary of the faith or a producer of proselytes, but rather a humble mendicant who feels the absence of brothers, sisters and mothers with whom to share the irrevocable gift of reconciliation that Jesus grants to all," the pope said.