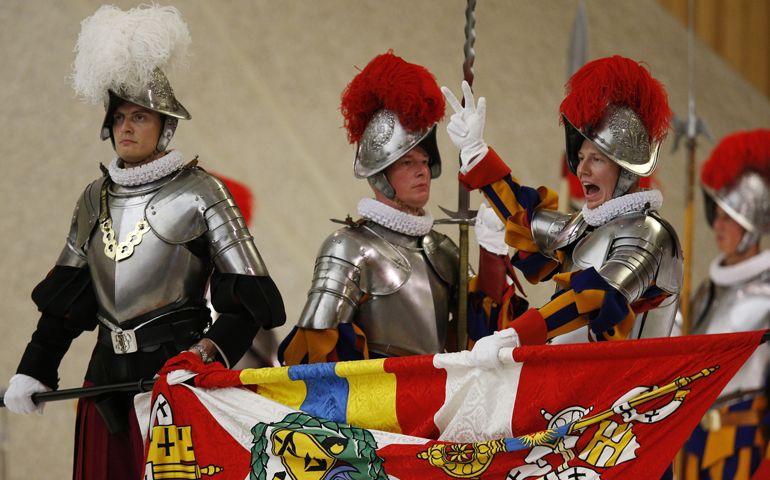 A Swiss Guard recruit takes his oath during the swearing-in ceremony for 35 recruits May 6 in Paul VI hall at the Vatican. (CNS/Paul Haring)

Vatican City — One young man's dream of becoming a Swiss Guard began with a postage stamp.

Michael Odermatt said when he was a small child, his godfather gave him a stamp depicting the ornately dressed papal soldier, "and I was fascinated by that image and wanted to know everything about the Swiss Guard."

The allure was kept alive when his older brother became a Swiss Guard and Odermatt was able to see -- during visits to Rome from his home in the northern Swiss canton of Aagau -- how a papal protector really lived.

"I went so many times to Rome to visit him that I was quite sure I would enter, too," he told Catholic News Service.

The younger Odermatt's determination came through May 6, when he was officially sworn in as a Swiss Guard with 34 other new recruits.

Before hundreds of family members and friends, and dozens of Vatican officials, he and his comrades took to the stage in the Vatican's Paul VI audience hall with much fanfare and flair to swear to "faithfully, loyally and honorably" serve and protect the pontiff and sacrifice, if necessary, their lives for him.

To the somber taps of five drummers, the recruits marched solemnly in procession wearing their 17th-century armor and metal helmets adorned with ostrich plumes, and wielding Renaissance weaponry.

The annual swearing-in ceremony is held every year on May 6, the date 147 Swiss Guards lost their lives defending Pope Clement VII in the Sack of Rome in 1527. Only 42 guards survived. Holding the ceremony on the anniversary is meant to remind new guards of the seriousness of their commitment.

Even though they are no longer fending off pillaging invaders, service is demanding and comes with a compulsory two-year commitment.

Odermatt said one of the job's challenges is trying to convince curious tourists they aren't allowed into Vatican territory without permission. The Swiss soldiers guard all entrances into Vatican City State as well as keep watch over the pope and his residence in the Domus Sanctae Marthae.

"The tourists want to enter some part they aren't allowed into and you have to say, 'No, it's forbidden to go there.' And some people just don't understand why it's not allowed, so sometimes you have to be" -- he said, pausing to think of the right word -- "diplomatic with them."

The other hard part of the job, he said, is sometimes "you have to stay six hours on your feet" for a shift, but he said the other amazing experiences the job entails more than compensate for that.

The best part of his work, he said, is getting the chance to meet the world's leaders. The Swiss Guard provides security and ceremonial services during visits of heads of state and other dignitaries to the Vatican.

"We see people you'd never meet in your normal life."

"The second best reason is serving the pope," he added.

Pope Francis met the guards and their families before the May 6 ceremony and thanked them for carrying out their "precious and generous" service with "dedication, professionalism and love."

The pope recognized the daily sacrifices that come with their job and said the strength needed to persevere comes from love and faith in Christ.

Members of the Swiss Guard must be Swiss, Catholic and top-notch soldiers.

Odermatt said they are first and foremost "security guards, bodyguards." However, there is a spiritual side, too, because "you are protecting the spiritual leader of the Catholic church" and serving the church as well.

Groups of new recruits come in to start their service on a staggered schedule in June, November and February of each year.

When the February group arrived and the new recruits were just getting their bearings and getting used to new protocols, they were suddenly thrust into another whole new world when Pope Benedict XVI announced his retirement Feb. 11 and the world's cardinals flocked to Rome to elect Pope Francis in March.

"It was amazing to be here," Odermatt said.

He said chances were already slim a young man from a small city in Switzerland would find himself in Rome during such a historic transition. But not only was he in Rome, he was one of a select corps of men required to be close to the unfolding events in public and behind the scenes.

"I really can't describe it, it was just amazing."

An overdose of infallibility

Addictions flourish when people are left to manage pain