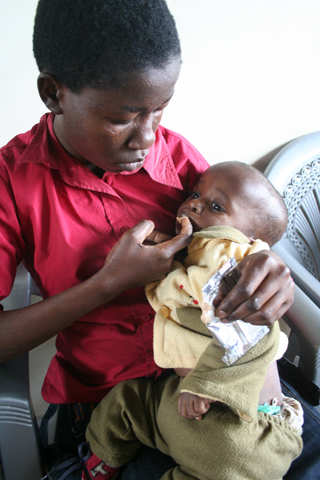 A mother and child at a Catholic-supported feeding center in Nairobi, Kenya. (NCR photo/Chris Herlinger)

Here is a question worth pondering for Mother's Day: Where is the best place to be a mother?

A new report by the humanitarian group Save the Children rates Finland as the country that treats mothers best. The worst country in which to be a mother, according to the group's international index, is the Democratic Republic of the Congo.

And how does the United States fare? Not nearly as well as many would hope. In its 14th annual Mothers' Index, Save the Children ranked the United States 30th out of 176 countries, behind all of Western Europe, Australia and Canada. That was a drop from 25th place in 2012.

The findings noted that, in 2011, approximately 11,300 babies in the United States died on the day of their birth, and the U.S. has the highest rate of first-day deaths in the industrialized world.

Why the high rates for the United States? "Poverty, racism and stress are likely to be important contributing factors to first-day deaths in the United States and other industrialized countries," the report concluded. It noted that "newborn and infant mortality are often higher among the poor and racial and ethnic minorities, and populations with high newborn mortality rates also tend to have high first-day death rates."

The lens of this year's report -- Surviving the First Day: State of the World's Mothers 2013 -- is the state of mothers and babies on the day of birth. That crucial day is one in which "mothers and their newborns face the greatest threats to survival, and when there is tremendous opportunity to save lives," wrote Carolyn Miles, Save the Children's president and CEO, in the report's foreword.

"Every year, 287,000 women die during pregnancy or childbirth, and 6.9 million children die before reaching their fifth birthday," Miles said. "Almost all these deaths occur in developing countries where mothers, children and newborns lack access to basic health care.

"While child mortality rates have declined in recent decades, 19,000 mothers still mourn the loss of a child each and every day -- an unthinkable number of heartbreaks. This is especially tragic since most of these deaths could be prevented at a modest cost."

In all, more than 1 million babies across the world die on the day of their births, the report said.

All of the bottom 10 countries in Save the Children's index are in Africa, so these issues are not an abstraction on that continent, as Kim Eva Dickson, a senior adviser for maternal and newborn health for UNICEF, said during a Tuesday launch of the report at the United Nations.

Dickson said despite some progress in recent years, it is still common for African mothers to wait a week before naming their children because of the uncertainty about whether the babies will survive those first days, she said.

"That first day of life is critical," said Dickson, a Roman Catholic. "We need to give all babies their name on that first day."

Even modest gains in improved health care could make a difference, the report said, including better training and education of midwives, who play a critical role in childbirth in poorer nations.

An analysis included in the report said the lives of more than 1 million children could be saved by increased usage and access to products that cost no more than $6. These include steroid injections for women in preterm labor; resuscitation devices; chlorhexidine cord cleansing that helps prevent umbilical cord infections; and injectable antibiotics.

It added: "Promoting adequate nutrition and counseling women to gain enough weight during pregnancy are important. But equally important is promoting a healthy and varied diet through an adequate supply of food that improves the nutrition of girls and women throughout life."

Catherine Ojo, a midwife, nurse and chief nursing officer at Ahmadu Bello University Teaching Hospital in Zaria, Nigeria, said improved maternal and infant health are all connected to the issue of women's rights in general.

In rural Nigeria, for example, a woman is still expected to wait and ask for permission from her husband before going to a hospital, even if the need is immediate. That has resulted in cases of mothers or infants dying.

[Chris Herlinger is a frequent contributor to NCR. He is a New York-based freelance journalist and a writer with the humanitarian agency Church World Service. He and photographer Paul Jeffrey are beginning work on a third book on humanitarian themes for Seabury Books. The new book will focus on the issue of global hunger.]

176. Democratic Republic of the Congo