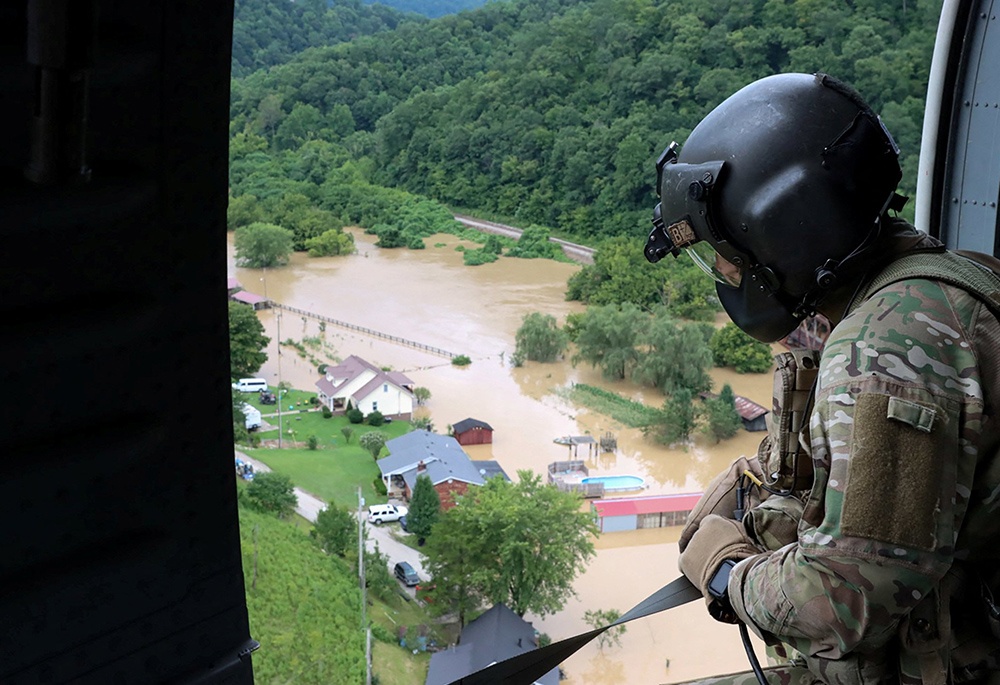 As residents of Kentucky endure historic flooding and face a rising death toll — which includes four siblings ages 2 to 8 years old — Bishop John Stowe of Lexington is working to assess the damage, ramp up assistance and listen attentively to those affected.

"There is fear and panic; people are trying to figure out where we go from here," Stowe told NCR Aug. 1.

The last week of July, 8 to 10 inches of rain fell in a mere 48 hours in southern West Virginia, western Virginia and eastern Kentucky, where creeks and rivers swelled and overflowed. Mudslides in Kentucky reportedly left some people stranded; bridges were destroyed and houses pulled off their foundations. Roads and electricity were disabled, and thousands of Kentuckians have been displaced.

On Aug. 1, while the region sustained additional rainstorms and bodies were recovered from the drenched landscape, Kentucky Gov. Andy Beshear updated the total deaths to 37. Hundreds of people remain unaccounted for. "Let us pray for these families and come together to wrap our arms around our fellow Kentuckians," Beshear said on Twitter.

All counties affected by the floodwaters are in the Lexington Diocese, and 15 parishes are in the area. As of Monday, Stowe knew of at least two parishioners who lost their homes. 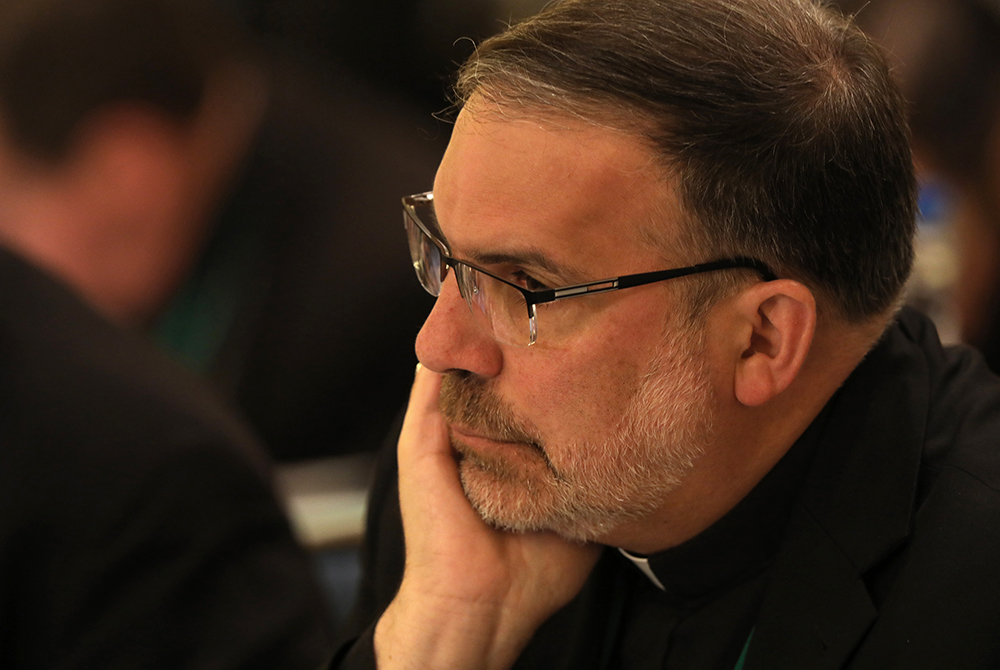 Bishop John Stowe of Lexington, Kentucky, listens to a speaker during the fall general assembly of the U.S. Conference of Catholic Bishops in Baltimore Nov. 12, 2019. (CNS/Bob Roller)

Though only around 1% of eastern Kentucky is Catholic, the flooding hit those served by church ministries hard, said Stowe.

Eastern Kentucky, which includes a stretch of the Appalachian Mountains, is one of the poorest regions in the United States; throughout Lexington nearly 1 in 5 residents live below the poverty level.

"All our churches have a social dimension to their ministry — food pantries, secondhand stores — and help people who live in dire poverty day in and day out," said Stowe. "To see this devastation is terrible."

Phone service has been spotty the past several days, but the bishop has been speaking with parish life directors and personnel. "There was more rain last night and today, so rivers they thought were receding might be rising again," he said. "There's also the possibly of flash flooding."

Last year rainstorms ravaged Beattyville, Kentucky, flooding a church and destroying a rectory. "They are still rebuilding, and now the new floodwaters are a foot away," said Stowe.

The bishop praised Beshear for swiftly declaring a state of emergency and said local mayors quickly opened shelters and schools for the displaced. President Joe Biden on July 29 declared a major disaster exists in the state and offered federal aid to supplement state and local efforts.

Stowe said he still determining all the ways he can support people, but he's currently focused on relief and recovery. "Participating with relief efforts is the best way we can minister to people right now," he said. Parishes that are able will be helping with their social outreach, likely offering food and water. St. Vincent de Paul and Catholic Charities of Lexington plan to assist, as does Catholic Charities USA.

The bishop said it's important to listen to people and to partner with them. "Those in Appalachia are used to people coming in from the outside and telling them what they need," said Stowe. "We need to walk with them, listen to them and hear what they need." 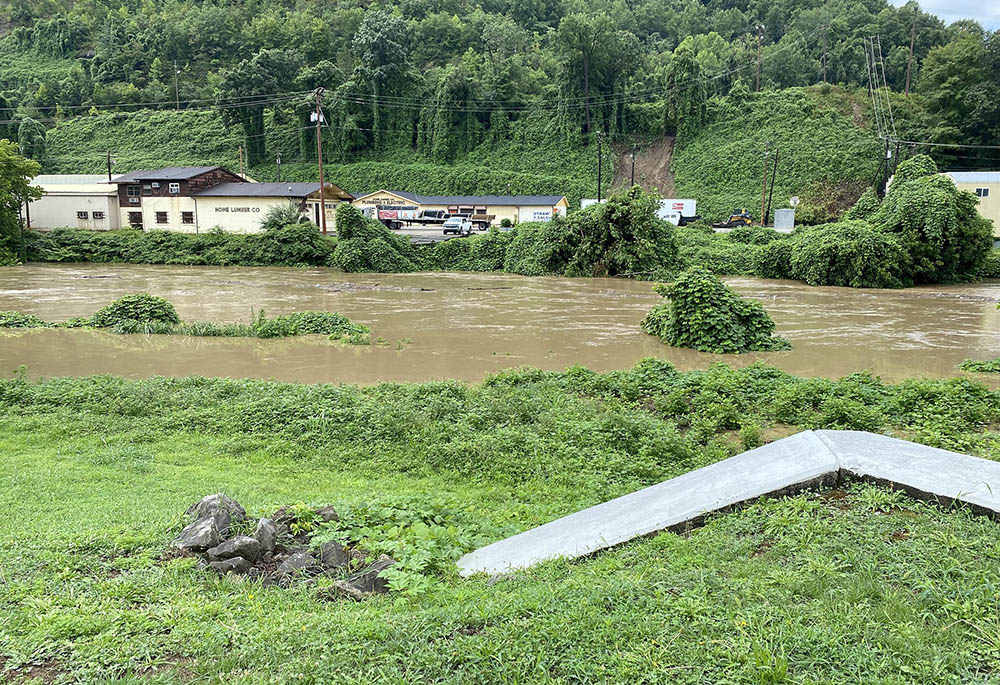 Raging floodwaters are seen in July 28 Hazard, Kentucky. Torrential rains fell late July 27 and into the next day in southeastern Kentucky, causing massive flooding that destroyed hundreds of homes and wiped out entire communities. Search and rescue teams, with the help of the National Guard, began searching for missing people July 29. (CNS/Diocese of Lexington/Edward Bauer)

Stowe is grateful for the prayers sent from across the country and said a few parishes in the Lexington Diocese held a moment of silence before Mass last weekend. "They lit candles and offered prayers for those who have died and those still missing," he said.

The path forward, added Stowe, was in part illustrated by the Sunday, July 31, Gospel — a parable about a rich man who thought he needed to build a bigger barn to hold his abundant harvest. God reprimands him, saying: "The things you have prepared, to whom will they belong?"

Jesus then explains: "Thus will it be for all who store up treasure for themselves but are not rich in what matters to God" (Luke 12:13-21).

The eastern Kentucky community will store up the treasure that matters most, said Stowe, "by helping one another through this and by providing relief and assistance wherever we are able."