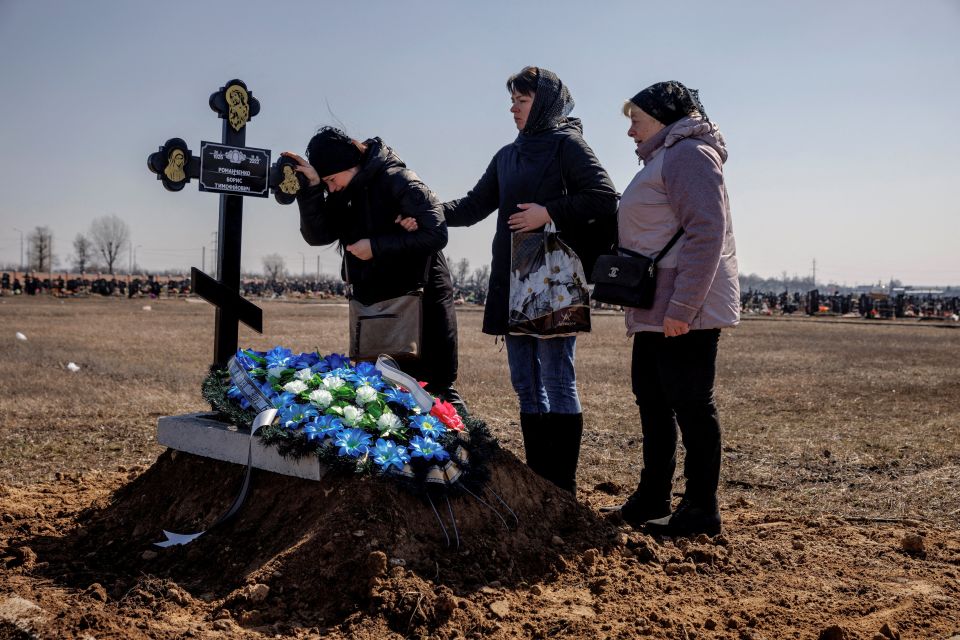 WARSAW, Poland — A bishop in Ukraine accused Russian forces of deliberately targeting aid centers and of destroying the port of Mariupol to scare other cities into surrendering.

"The Russians look for aid and medical distribution points where people gather — this is why charitable work here is now so dangerous," said Bishop Pavlo Goncharuk of Kharkiv.

"As for Mariupol, this is now completely in ruins — although we don't know how many civilians have died there, it certainly runs into thousands. I'm certain it was selected as an example, ostentatiously used as a firing range and shelled to rubble to show what will happen if other cities continue resisting."

In a March 31 interview with Catholic News Service, he said his own city of Kharkiv, with almost 2 million mostly Russian-speaking inhabitants before the war, also remained under constant bombardment despite being largely reduced to "ruins and ashes."

Four-fifths of local Catholics have fled the city's five parishes, Bishop Goncharuk said, and Masses were no longer being celebrated for fear Russian artillery would deliberately strike them.

"Churches have had their doors and windows blown in by bomb blasts that destroyed nearby homes; since there are no trams or buses, Catholics can't get to Mass anyway," said the bishop.

"There's no doubt they're deliberately targeting civilians, to kill as many as possible while terrifying the rest. It's a kind of show-extermination, and it certainly qualifies as a war crime and crime against humanity."

The Latin-rite Kharkiv-Zaporizhzhia Diocese has 42 parishes spread over seven regions of eastern Ukraine. It includes several Russian-occupied cities, as well as the self-declared republics of Donetsk and Luhansk, where no Catholic clergy are now active.

Bishop Goncharuk said he had helped move some priests and nuns from "hot areas" for their own safety.

He said local men in occupied areas had been forced to join the Russian army, as a disincentive to accommodation or surrender.

"Even thieving gangs sometimes follow certain rules — but the Russians have absolutely none, taking pride in what they steal and how many rapes they perpetrate," Bishop Goncharuk told CNS.

"We can't appeal to their consciences, since they've hardened themselves against any such possibility. Their entire outlook seems devoid of personal dignity, and where there's no dignity, there's no humanity either."

Ukrainian and Russian delegations held peace talks in Istanbul March 29, as Russia announced that it would "drastically reduce combat operations" in some areas in favor of a new focus on the eastern Donbas region, although Western governments questioned the claim.

Asked about the alleged pullback, Bishop Goncharuk said Russia could not be "trusted in any way," adding that he believed the claimed redeployment was "just a tactic" to enable extra troops and equipment to be brought in.

"What the Russians say about withdrawing shouldn't be believed — they're merely concealing their very heavy losses, particularly around Kyiv, and concentrating forces in different places," said the bishop.

"Russia has become a country of lies, criminality and death, its functionaries cleared of any sense of truth and self-respect. If you've no regard for rules and principles, you'll do anything that meets your ends."

Bishop Goncharuk said he "counted very deeply" on prayers from Western Catholics, adding that those "rejecting or ignoring God" in the current conflict urgently needed to seek conversion.

"When we reject God's commandments, we move to a place where Satan is acting — what we are witnessing is a spiritual struggle between good and evil, from which we must pray Ukraine is delivered," the bishop told CNS.

"We can only yearn for a true peace, which enables people to return to their homes, and for a victory that allows us to be a free nation again. But all assumptions and expectations are now on hold, since everything is changing so quickly."

In a March 29 CNS interview, Auxiliary Bishop Jan Sobilo of Kharkiv paid tribute to Catholics priests and nuns from Poland. They make up about half the Latin-rite diocese's priests and nuns, and most chose to stay on when Russian forces invaded Feb. 24.

He added that Pope Francis' March 25 consecration of Russia and Ukraine to the Immaculate Heart of Mary had created "greater hope" for an end to the conflict and "future healing of the wounds of war."

Your thoughts on the difference between 'church' and 'hierarchy'