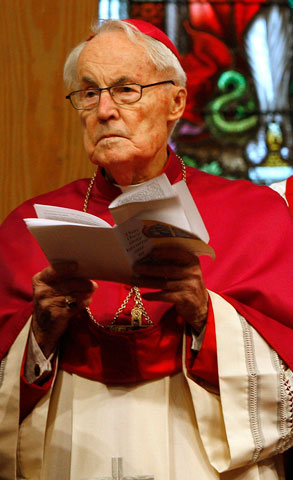 At 94, Auxiliary Bishop Timothy Lyne is the fourth-oldest Catholic bishop in the United States. Ordained 70 years ago, he will celebrate the 30th anniversary of his episcopal elevation in October. And he has lived in the same room at Holy Name Cathedral for almost half a century.

Those are impressive numbers, yet few Catholics outside of Chicago recognize his name. Lyne has graced NCR's pages only a few times, usually in the form of comments about more famous Chicagoans, such as the late Cardinal Joseph Bernardin or Msgr. Jack Egan.

Like so many "Vatican II" priests, Lyne has not sought the limelight, choosing instead to quietly but persistently serve the city where he was born. If some of his generation are frustrated with the direction of the church in recent years, Lyne remains easygoing and positive. Perhaps this is his secret to surviving five Chicago cardinals.

Technically an "auxiliary bishop emeritus" since 1995, Lyne is active in his retirement. He still has an office at the cathedral, mentors younger priests and visits retired ones, and is involved in ecumenical and interreligious projects. His hobbies include opera and Notre Dame football, although he didn't get to see the Fighting Irish in person last year because of some vision problems. He is the proud uncle of 18 nieces and nephews.

It's hard to find anyone to say a bad word about Lyne, perhaps because he rarely says anything negative about anyone else. He is especially respected and well-loved by fellow Chicago priests. Fr. Tom Nangle, a retired police chaplain, calls him a "one of my heroes" and a deeply spiritual man of integrity.

"Many bishops are great churchmen because they pay more attention to the institutional church than to the teachings of Jesus Christ," Nangle said. "Tim Lyne is a true churchman because he sees the church for what it really is, the people of God."

Lyne is a "good, common-sense priest," said Msgr. Kenneth Velo, a former archdiocesan official who now works in administration at DePaul University. Velo, like Nangle, remembers retreats Lyne gave when they were seminarians in the early 1970s.

"When we were young, we lost a lot of priests, a lot of mentors," Velo said. "Tim Lyne always stood out as a great example, as a good pastor, as someone who got things done, someone reliable, healthy, and effective."

The eldest child of Irish immigrant parents, Lyne grew up on Chicago's West Side. When he was 7, he and his brother contracted spinal meningitis. Tim walked away clean, while his brother, John, was disabled by the disease. "This influenced my life tremendously," Lyne remembers. "It gave me insight into the suffering people go through."

Selected by the pastor of his parish as a "bright boy" with priesthood potential, Lyne went off to the high school seminary in Chicago. In the summers, he worked in a pinball factory and a stockman's office, and occasionally tagged along with his police officer father into city court. "My dad said priests ought to have an idea about what's going on in the world," says Lyne, who recalls seeing women charged with prostitution in the courts. "He also said, 'You don't have to tell your mother everything you've heard.' "

Later, when Lyne became associate pastor at the cathedral, "I knew all the [prostitution] joints down here, but not because I patronized them," he says with a smile.

At the cathedral, he supervised an extensive renovation of the 1874 building and pastored more than one mayor and other prominent Chicagoans. Although becoming a bishop "never entered my mind at all," his visibility as the cathedral pastor involved him in archdiocesan projects and probably contributed to his being named a bishop in 1983 by Pope John Paul II.

It also probably didn't hurt that Lyne had helped his friend Bishop Alfred Abramowicz to bring the bishop of Krakow, Poland, to Chicago in 1969. "We were very good to him, and he never forgot that," Lyne says.

Lyne also has a good story about Pope Benedict XVI from when he headed the Congregation for the Doctrine of the Faith. "It was my first 'ad limina' visit, and I asked him a question -- it was a tricky question. He stopped and looked at me and said, 'Did I answer your question -- and what's behind it?' He was very bright," Lyne remembers.

About the new pope, Lyne is characteristically optimistic. "I've got great hopes for Francis," he says. "He's been an archbishop of a very large diocese. He's used to dealing with problems of the church on a local level.

"So far, I think he's done well," he adds. "The question always is, can he do the things that are necessary for the governance of the church? That's why he was elected."

Closer to home, Lyne has a good relationship with Cardinal Francis George, he says. "I can say a lot of things that nobody else can," he says. 'It's always important for the church that there's somebody who can say, 'You don't want to do this.' "

In Chicago, Lyne is that person. He is known as a truth-teller, though a gentle one, someone who has spent his whole life trying to understand people. "One lesson I've learned is to see people as they are. It's important as a priest to figure out why people are the way they are," he says.

Lyne still attends meetings of the U.S. bishops' conference, though he missed this year's June meeting. He is aware that the newer bishops are more conservative, but he is not discouraged.

"We have to remember, there is God," he says. "Sometimes I think that gets lost with people's strong opinions."

A version of this story appeared in the Sept 13-26, 2013 print issue under the headline: The life and faith of a 'true churchman' -- Chicago's retired Bishop Lyne keeps his focus on the people of God.