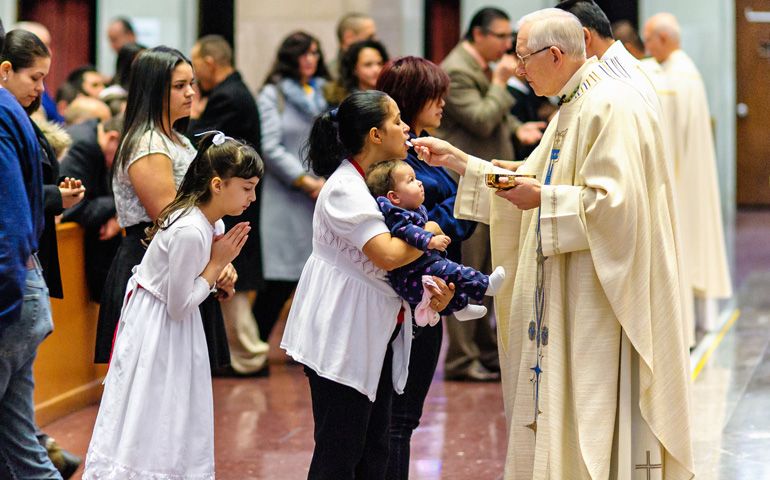 Catholics receive Communion during a Mass at the Cathedral of St. Joseph in Hartford, Conn., Jan. 18. (CNS/Bob Mullen)
This article appears in the Synod on the Family feature series. View the full series.

By most accounts, Pope Francis wants the synod on the family to be a messy, earnest affair -- high on dialogue and low on posturing.

The Oct. 5-19 extraordinary Synod of Bishops is meant to open deeper discussions throughout the church, and will culminate in another synod of bishops next year. The conversation about family will mean different things to people in different parts of the world. In Africa, there will be a focus on poverty, war, AIDS, interreligious marriage and polygamy. In Latin America, violence, jobs, inequality and the splitting up of families through migration. In Asia and the Middle East, war, refugees, religious persecution, interreligious marriage (especially in India) and selective abortion (in places like China).

In the Catholic West, the focus will be on of divorce, gay marriage and birth control -- matters of doctrinal law over which the laity and the hierarchy in America, where ex-Catholics would form the country's third largest religion if classified as such, increasingly find themselves at odds.

The expectation is that the synod will hold import for the future of the church. "This could replicate, in a somewhat different but no less fruitful way, a dynamic that was essential to the blossoming of Vatican II," NCR columnist Robert Mickens has written.

So then how does the church find its future in America today, the millennial generation?

American millennials, the digitally connected 20- to 30-somethings who grew up on the Internet and came of age during a time of war, economic decline, political dysfunction and rabid cultural polarization, are the subject of some controversy in American life. They have been labeled the "me me me generation." Because many end up back home after college (those who are able to pursue higher education, that is), they have also been called the "boomerang generation."

But dismissive labels tend to hold little sway with millennials themselves.

"I reject that notion that millennials are defined by a culture of superficiality," said 25-year-old Christopher Hale, senior fellow at Catholics in Alliance for the Common Good and co-founder of Millennial, a Catholic blog featuring millennial writers. "I find that most millennials are intelligent, open-minded people searching for a way forward in life."

"What we need to see more than anything is a church that is willing to listen and a church that's willing to engage," Hale said. "The church needs to realize that a large number of millennial Catholics did not grow up in a household with a mom and a dad. We are growing up in different times, and we still need a church to minister to us."

"What once was alternative is now normal," he said.

In America today, normal means that more and more millennials are choosing to marry later and later in life, and that many come from broken homes or have friends who come from broken homes. It means that millennials live in a time when the lesbian, gay, bisexual and transgender community is more than ever accepted in society, and more than ever protected by law. It means that overwhelming numbers view access to contraception as something necessary and basic in their lives -- not to be debated, not to be withheld.

At the Catholic level, there are roughly 15 million millennial faithful living in America, said Bill D'Antonio, a sociologist at The Catholic University of America and co-author of the 2013 book American Catholics in Transition, which traces the beliefs and values of American Catholics over the years. (The book draws on data collected in a longitudinal study of U.S. Catholic attitudes and practices that D'Antonio and a team of researchers have been conducting over 30 years in part with sponsorship from NCR.)

Catholic millennials, D'Antonio said, represent the tail end of a sweeping attitudinal shift that has taken place within American Catholicism over the past quarter-century, one from obedience and compliance with authority as the norm to an overriding sense of "conscience" as the primary marker of Catholic identity in American life.

Catholic "conscience" goes all the way back to St. Thomas Aquinas, D'Antonio said: "Aquinas said, 'Better to die excommunicated rather than violate our conscience.' " Today, American Catholics are "rediscovering" it, he said.

Illustrating the theory, D'Antonio's research shows that 87 percent of American Catholics today (the data was culled in 2011) believe you can still be a good Catholic without accepting the church's position on birth control, compared to 50 percent in 1987; and that 60 percent agree you can do so without accepting the church's position on divorce and remarriage, compared to 44 percent in 1987.

On the question of homosexuality, just 24 percent of U.S. Catholics now think "the locus of moral authority" should rest with the hierarchy, down from 43 percent in 1987. (Fifty percent think it should rest with individuals.)

A more recent study conducted in anticipation of the synod by 15 progressive Catholic organizations came up with similar results: 75 percent of Catholics think divorced and remarried couples believed their relationship to be worthy of the sacraments; 76 percent support alternatives to Humanae Vitae, including its teaching on contraception; and 73 percent said marriage equality is either "extremely important" or "very important" to them.

The study did not break the numbers down to show how millennials view the issues, but did include a free answer section, which gives a flavor of millennial thinking: "Why wouldn't sacraments be available to them?" a weekly Mass-going millennial from Hartford, Conn., wrote in response to a question about receiving Communion after divorce without an annulment. "And are you really going to ask these people to wear a scarlet letter when going up for Communion so they can be denied one of the most basic and amazing sacraments we are offered as Catholics?"

Hispanics may be "somewhat more devout," D'Antonio said, but they still trend in the same direction, toward conscience and away from obedience. As he notes in his book, a "plurality of Hispanic (42 percent) and non-Hispanic (41 percent) millennial Catholics say that the fact that Catholics can disagree with aspects of Church teaching and still remain loyal to the Church is very meaningful to them."

So what does this mean for the synod? Is it the case that the church needs to perform a doctrinal about-face?

No, say theologians who study the family (and teach millennials). Millennials want a process, not a product, they say. In other words, what the pope is said to want -- messy and earnest, and respectful of conscience -- may be just what the doctor ordered.

"Millennials are not hopelessly relativistic," said Emily Reimer-Barry, an assistant professor of theology at the University of San Diego. "My students are not interested in 'anything goes' or 'it's all relative,' but they are focused on getting away from a strict, rule-based 'this is the truth because we say so' attitude. They want attention paid to a variety of people's experiences."

Rather than buckling down on the culture wars, says Mary Ellen Konieczny, an assistant professor with the University of Notre Dame sociology department, many millennials want to talk them out.

"Millennials are slightly more likely to agree with the Catholic church's stand on abortion. They're more willing to wrestle with that," she said. "And I think part of that is an openness to other arguments. I've have had these conversation with students. Ultimately, [the conversations] are about dialogue [itself]. And I think that's characteristic of this generation -- an ethic of tolerance."

"My students have no respect for exclusion," said Julie Hanlon Rubio, an associate professor of Christian ethics at St. Louis University. And it's important that they stop feeling excluded, she says, "because social justice doesn't just mean Dorothy Day. It's about how you live in your family life, how you approach where you live, how you spend your money."

Similarly, D'Antonio sees it as a matter of effecting structural change.

"People talk about the Francis effect, and they look at church attendance and see that it hasn't budged," he said. "But maybe that's not the measure we should be looking for." Rather, he said, the true measure of the Francis effect may be seeing more young Catholics living their faith out in the world.

Irish archbishop: 'There's a growing gap between Irish young people and the church'