Mother Teresa and the secular scribe 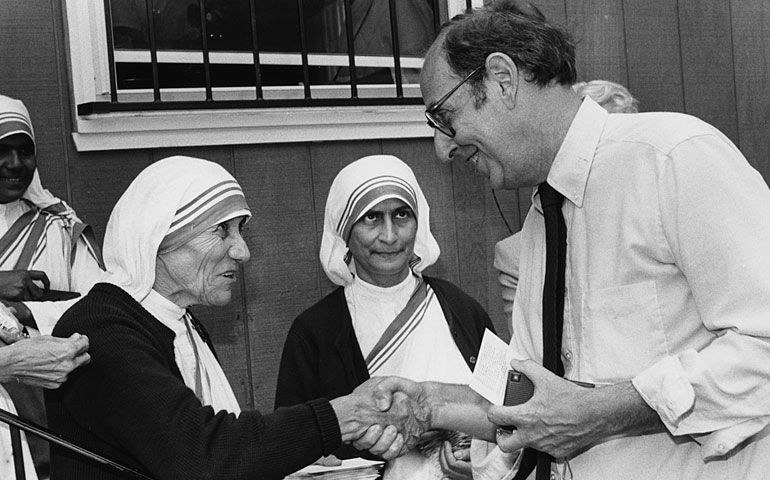 In 1971, eight years before winning the Nobel Peace Prize, 21 years after founding the Missionaries of Charity in Kolkata, India, and 45 years before being canonized a saint by the Roman Catholic church, Mother Teresa was in Washington, D.C. Besides fundraising and meeting with some admirers in Congress, she accepted an invitation from Edward Guinan to the opening of Zacchaeus Community Kitchen, an offshoot of the Community for Creative Non-Violence that the peace activist had begun two years earlier.

Mother Teresa, clad in her white sari with blue borders, ladled the first bowl of soup -- one of tens of thousands that would be served in the coming years.

I wasn't on hand that uplifting afternoon but I did catch up with the future saint when she came in June 1985 to the Anacostia neighborhood, long the poorest part of Washington, to open a home for single homeless mothers.

The photograph of Mother and me shaking hands was taken by Harry Naltchayan, one of my colleagues at The Washington Post. It was not a photo op that I staged, with plans to hoist it on a "Me Wall" that decorates too many offices in Washington. I think Harry had a click or two left in his camera. So why not snap a fellow Postie?

I did relish my conversation with Mother Teresa -- celestial moments for me -- but there's that other sister in the picture with us, giving me the eye. Her gaze is inscrutable. Is she glowering? Ticked off? Was she Mother's bodyguard, ever hovering as a protector against aggressive scribes and their secular taints?

After the Nobel Peace Prize was awarded in 1979, an editor at the Post asked me to prepare an obituary of Mother Teresa. Advanced obits, placed in what are called, fittingly, the newsroom morgue to be resurrected at the time of passing, is something of a journalistic honor reserved for the rare few, so that if the famous one dies at 8 p.m., the obit is set for the first edition at 9 a.m.

Even though Mother was a spry 69, and with actuarial tables saying it would be well more than a decade before her due date, I turned in the piece a few days later.

Late December 1992 brought jarring news: Mother had come down with bacterial pneumonia, coupled with a heart condition, and was near death in, of all places, La Jolla, Calif. -- one of the nation's wealthiest enclaves, with billionaires housed in gated mansions amid palm trees and seaside vistas.

Is it possible, I wondered, that the servant of the poorest of the poor would die among the richest of the rich? Would Mother's God dare allow this to happen? How would it look if her body was flown back to Calcutta on a private jet loaned by one of the La Jolla's Catholic billionaires?

She already had critics who cast blame for her taking money from the rich and assorted shady donors, a charge easily countered: It matters less where the money comes from than where it goes. Scant evidence exists that Mother Teresa diverted even a nickel for one personal comfort or another. The funds she raised were honestly channeled to the destitute.

Some powerful prayers, perhaps emergency supplications from the world's thousands of Missionaries of Charity sisters, must have been sounded: After two weeks in the intensive care unit of La Jolla's Scripps Clinic and Research Foundation, Mother Teresa pulled through, and soon departed La Jolla for Kolkata and her home base, the Home of the Pure Heart.

Janus decision was a blow, but workers point the way forward

By end of Obama's presidency, most hope had vanished

'If only we could row together, we would get there faster'