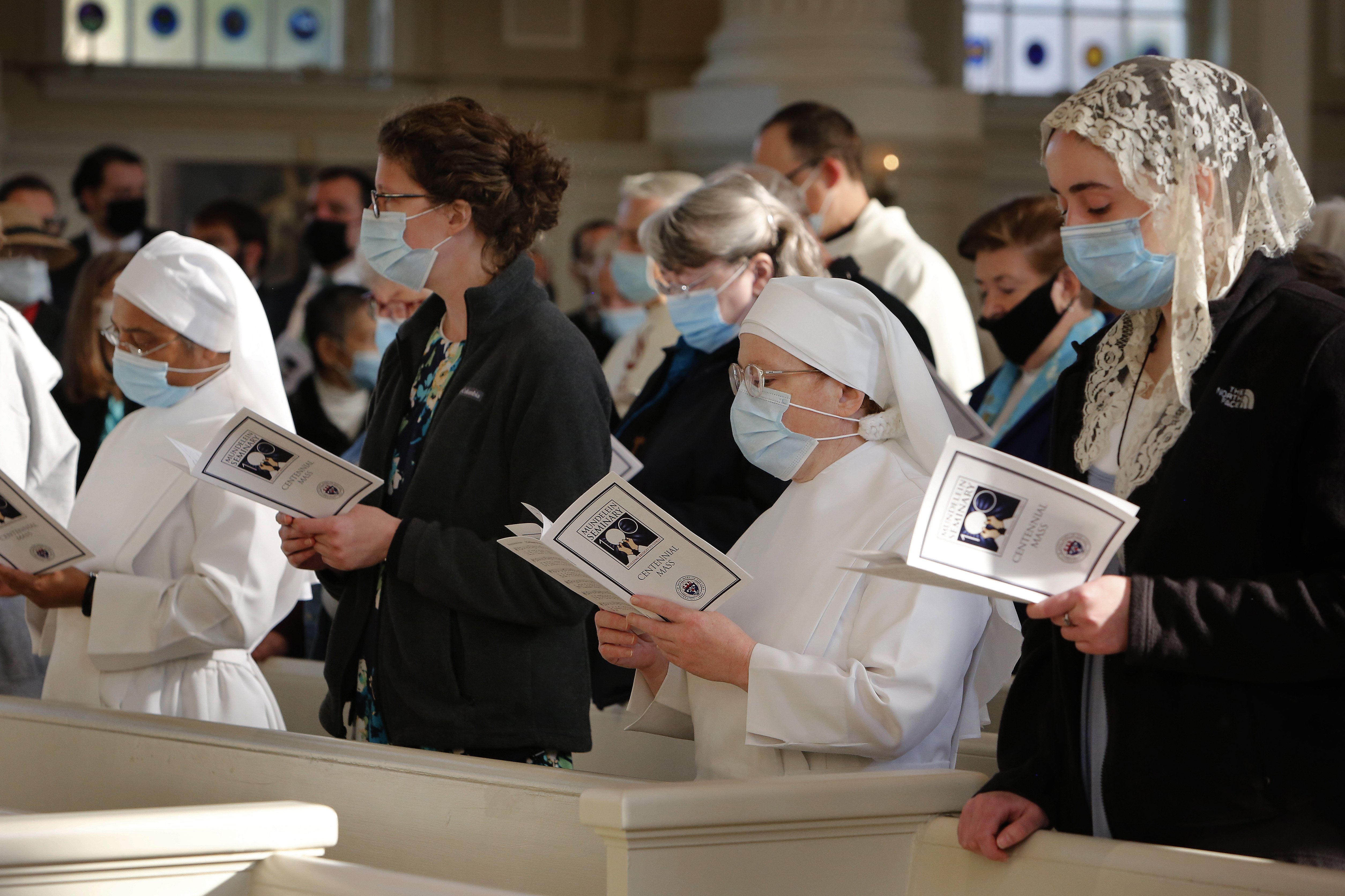 Guests including Little Sisters of the Poor sing during the entrance procession of Mass in the Chapel of the Immaculate Conception at Mundelein Seminary Oct. 17, 2021. (CNS photo/Karen Callaway, Chicago Catholic)

Hundreds of alumni, benefactors and guests gathered on a crisp October morning to celebrate the beginning of the University of St. Mary of the Lake/Mundelein Seminary's centennial year.

The celebration Oct. 17 included Mass said by Cardinal Wilton D. Gregory of Washington, a seminary alumnus; Cardinal Blase J. Cupich of Chicago; trolley tours of the grounds; and talks about the history of the school.

The institution was founded on its current campus by Cardinal George W. Mundelein under the 1844 charter of the University of St. Mary of the Lake.

The seminary educates future priests for U.S. dioceses. About 116 seminaries from 24 dioceses are enrolled this year.

Cardinal Gregory graduated from Mundelein and was ordained a priest of the Chicago Archdiocese in 1973.

As a seminarian and young priest, the cardinal said, he talked with priests and faculty who had known Cardinal Mundelein, who died in 1939 after leading the Chicago Archdiocese for 23 years.

"I don't recall them using the word 'intimidating' to describe him," Cardinal Gregory said in his homily. "But he was a man who exuded confidence."

Cardinal Mundelein was sent to what was still very much a frontier diocese in early 1916; the tenures of the diocese's first three bishops lasted less than 15 years combined. The Catholic population was dominated by immigrants from Ireland, Poland, Italy, Germany, Lithuania and "a dozen more European countries," Cardinal Gregory said.

Those groups often brought their own priests with them, along with orders of women and men religious, he said.

The cardinal spoke in a full Chapel of the Immaculate Conception, a building modeled on the First Congregational Church in Old Lyme, Connecticut.

Even Pope Francis acknowledged Cardinal Mundelein's insistence on building in an American style.

In a congratulatory letter read by Cardinal Cupich, the pope referred to the university's "unique architecture, so expressive of the American spirit."

Preaching on the Gospel text from Mark, in which Jesus tells the apostles that whoever would be great must be a servant, Cardinal Gregory spoke of the nature of priesthood, what it is and what it is not.

"The priesthood initiates a new relationship with the Lord," he said. "It leaves us human. We were gifted with no special sanctity because of our ordination."

Rather, over the years of his priesthood, Cardinal Gregory, now 73, said he has been impressed with the holiness of God's people.

Priests, he said, by virtue of their ordination, are not just servants of God, but friends, and as friends, they are called on to accompany Jesus and the church even in difficult times, no matter the crosses they are asked to bear.

"I am not a brave man," Cardinal Gregory said. "I would much prefer to be a friend of someone in ascendancy than someone in decline."

Father John Kartje, university rector and president, welcomed guests, noting the scaffolding that shrouded the chapel's steeple and forced visitors to enter through the side doors.

He was upset, he said, when he learned that the scaffolding would still be in place for the centennial celebration. But then he considered the meaning of scaffolding.

"It's setting up a structure in which something new can grow," Father Kartje said. "I hope you all realize how critical a part of the scaffolding here you are. A seminary like this only happens because of the work of many hands."

That includes not only donors, students and academic faculty and staff, he said.

"If this grand old place looks pretty good," he said, it's because of the work of the groundskeepers, kitchen staff, housekeepers and others. "It's primarily because of their efforts, day in and day out."

After the Mass, Tom and Madelyn Tirpak enjoyed brunch on the lawn with their six children. The family, parishioners at Our Lady of Perpetual Help Church in Glenview, Illinois, are longtime seminary supporters.

Tom Tirpak told Chicago Catholic, the archdiocesan newspaper, that they visit the seminary often to support the seminarians and to pray for vocations, including praying that if one of their children is called to the priesthood or religious life, they will be open to it.

In addition to the seminary and its associated graduate school of theology, the university includes institutes for the education and formation of deacons and lay ecclesial ministers, the Liturgical Institute, the Instituto de Liderazgo Pastoral (Pastoral Leadership Institute), and the Joseph and Mary Retreat House.