NCR former publisher: ‘I’ve always felt as much a missionary as a journalist’ 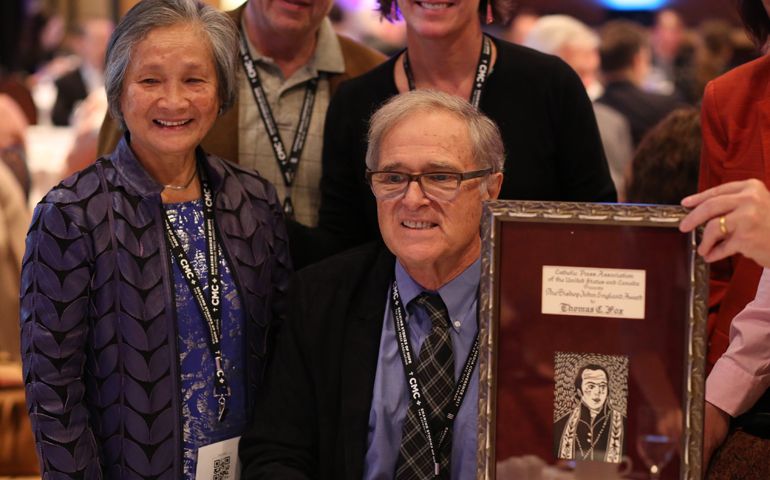 Presented annually, the award recognizes publishers in the Catholic press for the defense of First Amendment rights, such as freedom of the press and freedom of religion. It is the CPA’s highest award for publishers.

Tom Fox became editor of National Catholic Reporter in 1980. He became publisher in 1997 serving until 2004. He returned as editor in 2008, was named publisher again in 2011 and served in that role until his retirement in 2016.

Following is the text of Fox’s acceptance speech.

I’m most grateful for this unexpected honor.

Allow me to receive this on behalf of the entire NCR staff, current and past. NCR has now spanned five decades and is the product of many people.

At NCR we sometimes talk about “the spirit of the paper.” At its best, it asks tough questions of Catholic leaders and of the Catholic community; it often reports stories that church leaders would rather not see the light of day; and it allows a forum for voices that without NCR would often remain unheard.

Some have called us “muckrakers,” thinking this somehow might hurt our feelings. However, I’ve always take it as a compliment.

Our critics — and there’ve been many — have characterized our work as “biased,” “outrageous,” even “blasphemous.” Two of our local bishops wanted the name Catholic taken from our masthead.

There is a cost to the kind of journalism NCR was founded to do and has remained committed to.

When we first reported early on on the clergy abuse scandal, I was often told we were “tearing down the church.” As it was operating at that time in some rectories and chanceries, I think I could say that I hoped they were correct.

Yes, we’ve had plenty of supporters and critics. To both I say we’ve always tried to uphold solid professional standards. I am sorry for those times — and there have been those times — when I have failed to live up to journalism’s highest ideals.

NCR’s founders set a high bar for themselves and their successors when they used the Jesuit theologian John Courtney Murray’s 1962 talk to journalists as both a guiding document and the publication’s first advertising flyer. In that document Courtney Murray declared that the people’s right to know, in the broader society and within the church as well, was virtually unlimited.

Know that I feel very blessed to be standing here today. I’ve enjoyed every moment in journalism. If NCR holds a special place in telling the story of our church, all of us here are involved in different ways in constructing what some call “the first draft of history.”

I am fully aware that NCR’s staff has benefitted over the decades from the work of many other Catholic publications.

Preparing my remarks, looking back upon my professional career, I found myself searching across five decades of fulfilling journalism. But, frankly, I’ve always felt as much a kind of missionary as a journalist.

I need to explain.

Fifty years ago, Catholics worldwide were experiencing the “fresh winds” of a three-year council. The proverbial windows of our church had been blown open by declarations and decrees. 1965, the year I started my senior year at Stanford University, the [Second Vatican] Council issued Lumen Gentium and Gaudium et Spes. For the first time we, the laity, were being told we were members of the “royal priesthood!” Not only that, but we were being called to exercise this priesthood with “the witness of a holy life, by self-denial and active charity.”

But these commissions were not just to be personal.

Gaudium et Spes called upon us, the laity, to do nothing less than share “the joys and the hopes, the griefs and the anxieties of human family, especially those who are poor or in any way afflicted.”

Wow! To be 21 years old then — in 1965! It was then I found myself first trying to weave the values and commissions of Vatican II into an unanticipated calling to journalism.

As that new life-giving Vatican II fresh air was beginning to blow through our U.S. parishes, so, too, were the dark, hot and divisive fires that were being generated in the distant land of Vietnam.

Fresh air and stifling heat. … These two emerging energies were — at a relatively young age — preparing me, shaping me, and propelling me forward. Vatican II and the Vietnam War.

How could I respond to both? It was a unique moment in world history and, looking back, the most formative moment in my life.

I graduated from Stanford University in June 1966. Just months before Buddhist monks were immolating themselves on Saigon streets and the war was coming to a rapid boil. Without waiting for my graduation ceremony I volunteered to go to Vietnam, not as a combatant for one year, but rather as an unpaid civilian volunteer for two years.

I signed up with an NGO, International Voluntary Services, to work with war victims.

After a month of language training I was assigned to work in Central Vietnam in the city of Tuy Hoa. I rented a one room cement block house, and it became my home and refuge for two years. I was the only American living outside the local military compounds and air bases.

My assignment was to assist, in any way I could, local villagers whose homes had been destroyed and had been forcibly resettled on the hot and arid sandy beaches along the coast. Remember, these were farmers. You cannot grow rice or vegetables on sand.

They were to get six months of “resettlement” aid. But it never came. They were hungry, sick and many of the children were starving.

The Dong Tac and Ninh Tinh camps to which I was assigned were made up mostly of old men and women, mothers and children. Young men were absent. They were fighting for one side or another.

I wore Vietnamese pajamas, ate Vietnamese food, learned new customs and a new language. (Years later, I married a young Catholic Vietnamese social worker.) I got to know these displaced people (In Vietnamese they were called “disaster fleers.”) as few other foreigners ever could. I shared tea with them, strained to understand this new language. I absorbed their pain; fought for food for them. At times, even helped bury their children.

I won’t talk much longer, but I want to make a point here.

I want to tell you a story I don’t remember ever before sharing publicly.

Most of the people, sometimes thousands at a time, had been herded into these camps, 30 to 40 in a single shelter, made up of corrugated tin sheets. It was hot. I did what I could. Not much. Small things, like starting a hair lip repair project; setting up workshops to teach young girls how to sew and make conical hats for a living instead of going into prostitution.

One day I invited a half dozen or so of the men — poor as dirt, all very thin, and wearing the pajamas they had worn for weeks, if not months — to my one room cement dwelling. We drank tea together, staring a conversation. “What,” I asked, “should I do in the camp that would most help them?”

They almost all agreed to the same thing: “Tell your people what is happening to us; tell them our stories.”

“The American soldiers have to leave Vietnam,” they said.

It was only months earlier I had heard from one of my Stanford professors, Michael Novak, an old friend, of a new newspaper that had just begun to publish. It was the National Catholic Reporter. I wrote the editor, Bob Hoyt, later a St. Francis deSales’ award recipient.

Hoyt quickly wrote back, asked for copy, any copy I could send, and he quickly dubbed me “NCR Vietnam Correspondent.” Alas, I had become a journalist. My writing was awful. Hoyt’s editing was superb. I learned the importance of editors. Editors could make copy that sparkled.

Reporting stories from Vietnam was soon to become a passion. I submitted articles in those years, not just to NCR, but also Commonweal and U.S. Catholic.

Journalism has always been a sacred mission for me. That mission began in Vietnam and has continued through my career, most fittingly at NCR for over 35 years.

I fit with NCR’s mission like finger to a typewriter.

NCR has had a decades’ long penchant for telling stories of the marginalized — both outside and inside the church. Editors have come and gone; publishers as well. But NCR’s spirit, values and mission — professional, independent Catholic journalism — has remained intact.

I’d like to think the NCR Catholic lay voice — one of a good number that proudly emerged in the years after the council — has remained faithful to its founding mission to this day.

Our voice has taken us into journalistic battle — and even into court — as NCR has tried to speak out on behalf of the marginalized and often voiceless.

And so allow me to dare suggest that if Bishop England were here today, he would uphold that NCR mission and that he would be proud of the work NCR has done over these years.

I am sincerely grateful for this honor. Thank all of you and the leadership of the Catholic Press Association gathered here today.

More about the Bishop England Award: The award is named for the Irish-born bishop of Charleston, South Carolina, who founded a newspaper, The Catholic Miscellany, in 1822. The Miscellany is still in operation. As publisher of the newspaper, Bishop England defended separation of church and state, saying it was good for both entities. He also espoused freedom of religion. The most recent winners are:

People | NCR former publisher: ‘I’ve always felt as much a missionary as a journalist’

The importance of a lay independent voice