At nearly 80, sÌ, Dolores Huerta can 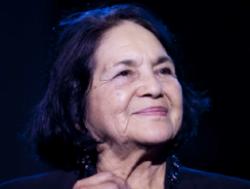 Dolores Huerta will be forever linked with Cesar Chávez and Philip Vera Cruz as a cofounder of the United Farm Workers Union in the 1960s. As director of a grape workers strike and a national boycott against grape growers for the meager wages afforded their workers, Huerta was instrumental in orchestrating efforts that led to a major victory for the union and the labor movement.

Huerta, who left the union several years ago to found the Dolores Huerta Foundation in Bakersfield, Calif., proudly announced at the AARP Diversity Conference in Chicago, “Next year I will be 80.” She was honored at the June 8-10 conference as one of the nation’s extraordinary older women.

The energetic Huerta dedicated her foundation to supporting efforts in community organizing. She told the 600 attendees that one former organizer -- President Barack Obama -- told her, “I stole your slogan.” Huerta’s phrase, “Sí, se puede!” which galvanized the farm workers’ movement, translates into English as “Yes, we can!”

In an interview, Huerta noted, “I still work with farmers and we teach the importance of the unions, but I wanted to include other activities as well.” She has become a frank critic of America’s failure to value elders and calls for new strategies to bind generations together.

“I think the elderly have a lot to contribute to society, and the way to do it is to have seniors incorporated into the community” rather than promoting programs that “shut them off in a corner.” She encourages communities to devise ways to tap the knowledge and wisdom older adults have to offer.

“Our whole society is so youth-focused,” Huerta contended. “Anglo or U.S. culture demeans elderly people.” Generally, she said, “cultures of color have more respect for elders.” Traditional views, though, are being challenged by the rapid aging of the Hispanic population in the United States. Expected to more than double in the next two decades, the Latino population of those 65 or older will yield increasing numbers of older adult children caring for very elderly parents.

Although Huerta noted that Latinos are deeply reluctant to place their elders in nursing homes, sometimes those in their 50s or 60s face their own debilitating medical conditions and may not have the strength to assist their aging parents. Unable to lift their parents from a chair, bed or bathtub, these aging boomers will increasingly confront their “pangs of guilt,” she said, over finding long-term care for a frail parent.

Huerta acknowledged that “the longevity facing baby boomers, especially women” will only intensify the stress on families trying to cope with aging relatives. She conceded that government cannot do everything, but refused to accept the conservative political position that the Social Security system should be downsized. In order to provide an effective safety net for families, she said, “more economic resources need to be appropriated.” That’s a goal, she added, best accomplished through continued pressure on politicians. “You do it the same way you organize communities,” she stressed.

At the local level, Huerta described her foundation’s organizing success in one California county. Using techniques such as petitions, the foundation helped local citizens gain infrastructure improvements, from the building of sidewalks to the construction of a gymnasium where none had existed before.

Huerta said a county supervisor told her that the newly organized citizens had become his eyes and ears, resulting in a shift of the county’s budgetary priorities to be more responsive to people’s real needs.

Although Huerta advocates for a stronger government role, she also urges people to take responsibility for personal behaviors that may negatively affect the well-being of families. “Diabetes is rampant among blacks, Latinos and indigenous peoples,” she stated, citing but one of what she termed “the terrible individual diseases” that are exacerbated by unhealthy diets and poor nutrition. She emphasized, “Preventative health could save us a lot of money in terms of health costs.”

Educating communities about sound health practices requires effective communication, Huerta said, and she’s concerned that the increasing failure of individuals to communicate is an ominous sign of a fraying society: “We don’t know how to talk to each other.”

While waiting in an airport, she said, “I watched a family of four, a man, a wife, and two kids. The parents were on their cell phones; the children were on their Gameboys. No one was talking to each other.”

Huerta recalled that while on the campaign trail in 2008, she sometimes traveled with other well-known personages. When their formal duties ended, though, each retreated to his or her cell phone or text messages -- even though they were still seated within easy conversational range of their companions.

The mother of 11, Huerta said she, her children and grandchildren make a conscious family effort not to lose the art of conversation. Any family will find strength in communication, she said, “and I just don’t mean the nuclear family.” For Huerta, the term family extends to those who define themselves as such, including gays and lesbians.

Huerta attributes her determination to pursue her beliefs to her mother and to the influence of other strong women and feminists she has encountered and befriended over the years, especially Ms. Magazine founder Gloria Steinem and former National Organization for Women President Eleanor Smeal.

One possibility she has seen realized is the nomination of a Latina for the U.S. Supreme Court. “I’m thrilled,” she said of President Obama’s selection of Judge Sonia Sotomayor.

Donnelly is confirmed as US ambassador to the Vatican