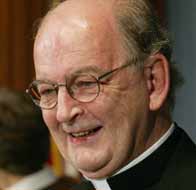 AMERICAN BABYLON: NOTES OF A CHRISTIAN IN EXILE
By Richard John Neuhaus
Published by Basic Books, $16.95

Soon after Fr. Richard John Neuhaus died in January, encomiums for his life and work appeared in this country’s top conservative newspapers and periodicals. Obituaries and assessments appeared also in journals that bore the brunt of his sardonic, scathing, at times unfair attacks, including the National Catholic Reporter.

This was not surprising, for even those who disagreed with him had to admit that Neuhaus made his mark, whether as a youthful civil rights advocate and opponent of the Vietnam War or, in more recent years, as founder of the Institute for Religion in Public Life and its signature journal, First Things.

Many commentators describe his career as a journey from left to right; as an abandonment of, or recovery from (depending on the viewpoint), his 1960s-style liberalism to an embrace of 1980s-style neoconservativism. Such plot lines obscure the extent to which Neuhaus propounded the same basic themes throughout his career. These themes are on full display in his last book.

American Babylon is about being Christian in the United States. The title is an allusion to the Babylonian exile after the fall of Jerusalem in 587 B.C., when God, through the prophet, called upon the Israelites there to build houses and plant gardens, to make families and multiply, to “seek the welfare of the city where I have sent you into exile, and pray to the Lord on its behalf, for in its welfare you will find your welfare” (Jeremiah 29:4-8).

These ancient instructions, Neuhaus notes, were interpreted by New Testament and patristic authors to mean that Christians, in whatever land they live, await their return from exile, not an exile from the earthly Jerusalem however, but from the heavenly Jerusalem. For Christians, every nation is Babylon, and their duty is to go along with the customs and seek the welfare of the city.

And yet, “there is a limit to their going along.”

Like the Old Testament heroes, Christians are not to worship false gods or accommodate themselves to the ways of the city when it involves betraying their faith. Thus there is a tension or dialectic for Christians between their ultimate allegiance to God and their political allegiances, which are “penultimate.”

This distinction highlights the significance of the United States, as Neuhaus sees it, for the government itself acknowledges this distinction in the First Amendment of the Constitution. The government declares its incompetence in religion but also protects its free exercise in society. This constitutional arrangement avoids the twin dangers of direct governmental control of religion, as in a theocracy, and of privatizing religion, as in the militant secularism of many European governments since the French Revolution.

Thus the task of Christians is to persuade their atheistic fellow citizens of the need for God in public life, while at the same time warning their overly eager fellow Christians against using government to enforce religious belief. Setting up the Christian task in the United States in this way allows Neuhaus to claim a middle position between two extremes and presents his own views on the relation between Christianity and America as “moderate.”

Neuhaus argues that Christian allegiance to America is provisional, not eschatological, limited yet substantial and real. For this reason, he affirms his identity as an American and derides radical critics who seek to escape time and place by claiming “citizenship of the world,” an ironic impulse, he notes, that reflects a very American way of thinking.

Neuhaus is at his best in picking apart the arguments of his opponents. His positive account of natural law as the basis for a public philosophy is less compelling. This becomes clear in his use, and misuse, of Alasdair MacIntyre, on whom he draws to critique utilitarianism and individualism. In his book After Virtue, MacIntyre shows that the Enlightenment project has failed and argues for recovering the Aristotelian tradition of the virtues by constructing local communities amid the dark ages that are already upon us. “This time however the barbarians are not waiting beyond the frontiers; they have been governing us for quite some time. And it is our lack of consciousness of this that constitutes part of our predicament.”

Neuhaus quotes this passage, but suggests it is “overdrawn” and translates it into a simple appeal for “traditional values.” But this misses the point. MacIntyre’s argument is that Aristotelian virtue is corroded by the modern state and that the only way to extend this tradition is through practices that resist its facilitation of free-market capitalism. Similar problems arise elsewhere in the book.

Nowhere does Neuhaus engage McIntyre’s critique of the modern nation-state as a deadening and deadly bureaucracy masquerading as a genuine political community.

This is no merely theoretical matter. Without a substantial account of a polis distinct from America, the tendency will be to imagine an idealized America. In these essays, this idealization emerges when Neuhaus claims that “the people who are the American polis are deeply attached to the concept of the dignity of the human person.” True, this concept is often invoked by U.S. citizens, but it is applied in contradictory ways in particular cases -- not only in abortion, but also in intentionally attacking innocent civilians in war.

Neuhaus’ exhibits the flaws of his two predecessors and personal heroes in public intellectual life, Reinhold Niebuhr and John Courtney Murray. While readily admitting that the American experiment has weaknesses, he is clearly not ready to hand over its title as the last best hope of the West. Judged on the basis of right reason and the natural law, Neuhaus’ stance on America is not very “moderate” at all.

“Hope and Hopelessness” makes for particularly poignant reading, given that Neuhaus wrote it while dying. Musing on humanity’s statis viatoris, our being on the way, and on the infinitely receding horizon of our hope for a better world, he writes: “It is a hope for a future generation, not for me. I will die before it is realized, if it is ever realized. Hoping in such a future is little more than leaving a greeting card for future generations, wishing them luck.”

These are words written by a man who knew where he stood, but also knew that this knowledge is veiled in “learned ignorance” (Augustine’s phrase).

For those of us who disagreed with where Neuhaus stood, this is a comforting and discomfiting phrase, for “learned ignorance” abounds on the left and the right and everywhere else. In the end, we’ll all have much to learn about the significance of first things as they are revealed in the searing light of last things.

Michael Baxter teaches theology at Notre Dame and lives and works at the Catholic Worker in South Bend, Ind. He is also National Secretary of the Catholic Peace Fellowship.

Parents of missing Mexican students travel to U.S. to appeal to pope

Pandemic expected to cause drop in Catholic schools' international students