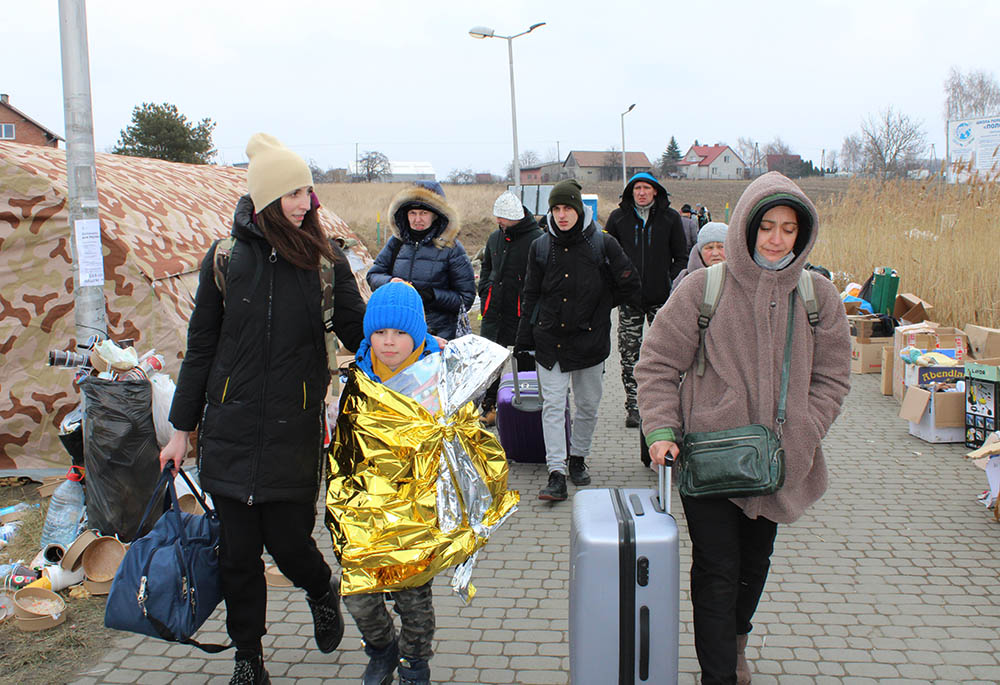 Amid biting wind and frigid temperatures, Maryna Zozuliak stood dazed in a crowded parking lot, trying to get her bearings.

She was anxious but also relieved — happy that she had crossed the Ukrainian-Polish border by car with her godfather and her sister, Elisabeth. The family had arrived safely at a refugee reception point in Przemyśl, in southeastern Poland.

The family had fled their home of Vinnytsia, about 300 miles due east from Przemyśl.

"I feel better, I feel protected here," she said, pausing with her single piece of luggage.

But she said there was not much time to dwell on that. There were next steps to think about — she and Elisabeth were bound for a bus that would take them to an overnight stop in the city of Wroclaw, in western Poland, then head to the Netherlands to stay with an aunt living there.

While praising Poland's hospitality and welcome, "We hope we can return home soon," Zozuliak said. 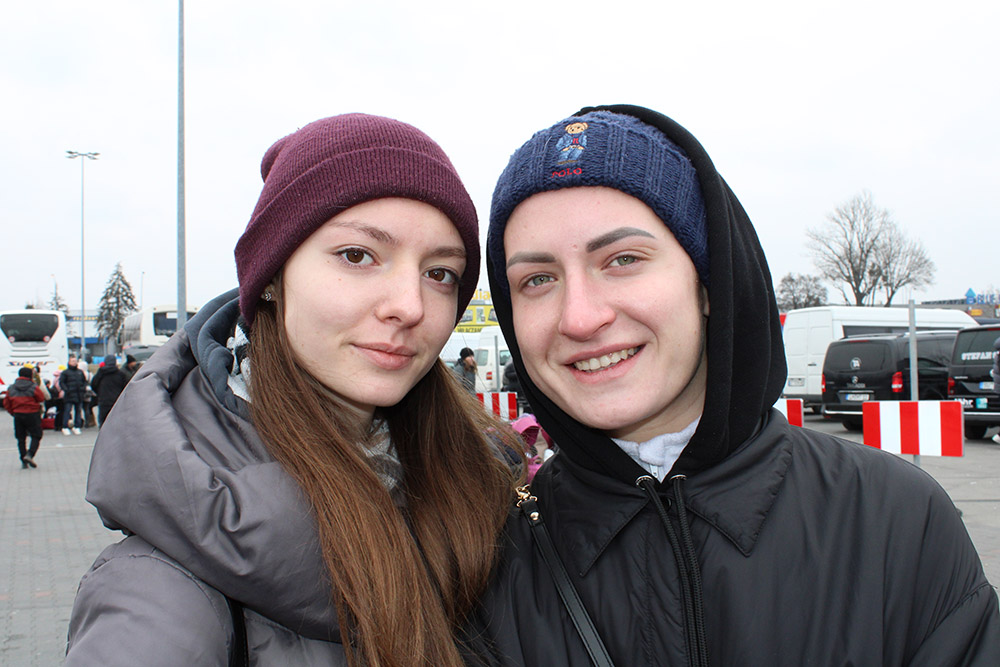 Maryna Zozuliak, right, with her sister, Elisabeth, in the parking lot of a refugee reception center in the southeastern Polish city of Przemyśl. The two were bound for the Netherlands to stay with an aunt living there. (NCR photo/Chris Herlinger)

How long that could be is anyone's guess; the war in Ukraine rages on, with Russian assaults on Ukrainian cities continuing.

The scale of what is happening in and around Ukraine is both alarming and staggering: A mounting humanitarian crisis grips Ukraine, with Europe experiencing its largest refugee crisis since World War II.

"More than two million refugees have fled the country in less than two weeks, almost all of them women and children. Millions more have been displaced within Ukraine," noted Sean Callahan, president of the U.S.-based humanitarian organization Catholic Relief Services.

In other words, multiply Maryna Zozuliak's experience by nearly 3 million people and you get a sense of what is happening in Eastern Europe right now.

Children are "dragging bulky luggage, their faces wet from tears," Callahan said in a March 8 statement. Crowds in Poland and neighboring countries are "huddling inside bus terminals for shelter, knee-deep in their belongings." 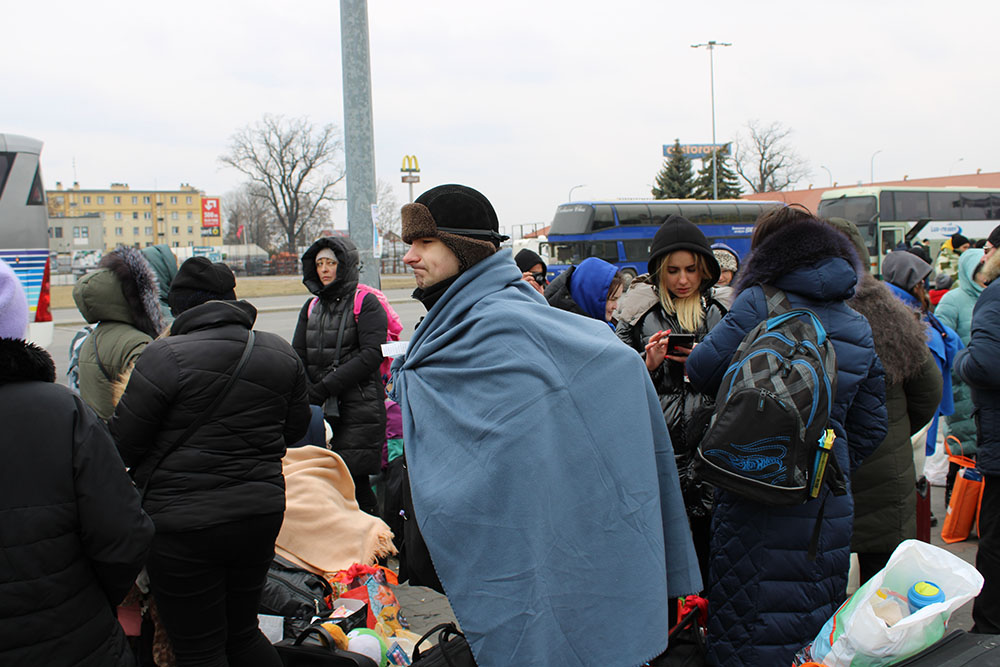 Recent arrivals from Ukraine at a refugee reception center in Przemyśl, Poland, await buses to take them to other locales in Poland or elsewhere in Europe. (NCR photo/Chris Herlinger)

"There's immense suffering and there's a huge humanitarian need and a crisis that is evolving daily," Tetiana Stawnychy, president of Caritas Ukraine, said in an interview. "And that crisis needs both material and 'a heart response' and a prayer response."

Interviewed from western Ukraine, where Caritas has moved its main operations from the besieged capital of Kyiv, Stawnychy said the immediate needs Caritas and other humanitarian groups are responding to within Ukraine include getting temporary shelter, food, medicine and hygiene items to those displaced, as well as trying to provide "psychosocial" support for those who are traumatized.

At welcome centers run by Caritas, many people are "just sitting and in shock and kind of just sitting with their phones, and needing to talk," she said.

That is within Ukraine itself, but the need for succor and comfort is also needed once people arrive in safer spaces in neighboring countries like Poland.

On the same day that Zozuliak arrived in Przemyśl, a 32-year-old volunteer from Norway manning a Caritas "comfort station" said the refugees are clearly in shock. 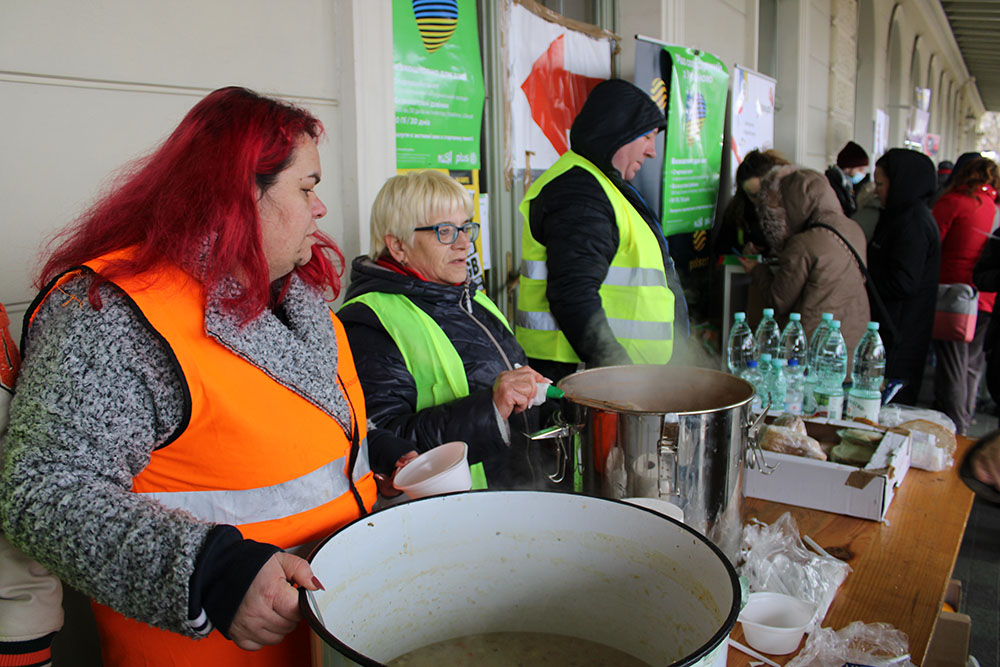 Volunteers at a feeding center at the train station in Przemyśl, Poland, welcome arrivals from Ukraine. (NCR photo/Chris Herlinger)

The volunteer recalled meeting one girl who walked some 11 hours to escape a warzone, and had traveled to Przemyśl by herself. At the Caritas station, she found a place to sit, rest and savor a cup of hot tea.

"They're shocked to be leaving everything behind," said the volunteer, not wishing to be identified by name because he believed the focus of any story about Ukraine should be on the refugees and not volunteers like himself.

Within Ukraine, Stawnychy credits a huge mobilization of nongovernmental groups and volunteers, who are working in concert with local governments, to help ease the immense suffering.

"Everybody's pitching in in the best way that they know how," she said in a phone interview March 12. "I think what's been really important in these first weeks is that it's been this huge outpouring of generosity of the local population that stayed, that hasn't left."

"Suddenly somebody's there to catch them and hold them as they move on," she said, adding that the "overwhelming outpouring" of help has been moving to see.

"In some of our more outlying regions where we have a lot of parishes, people in parishes are taking people in," Stawnychy said, adding that Caritas is reaching out to local parish networks to expand the capacity to help ease the mounting crisis.

While pressures within Ukraine increase, Stawnychy believes the act of helping is healing for both those displaced — those "fleeing for their lives" — and for those, say, taking people in into their homes.

She added: "It's like a restoration of a sense of this human face of human dignity of love and kindness and mercy. That's such a key part of who we are and how we're made."

Observations like that were also on the minds of volunteers working at a refugee reception center on the outskirts of Korczowa near the Polish-Ukrainian border. 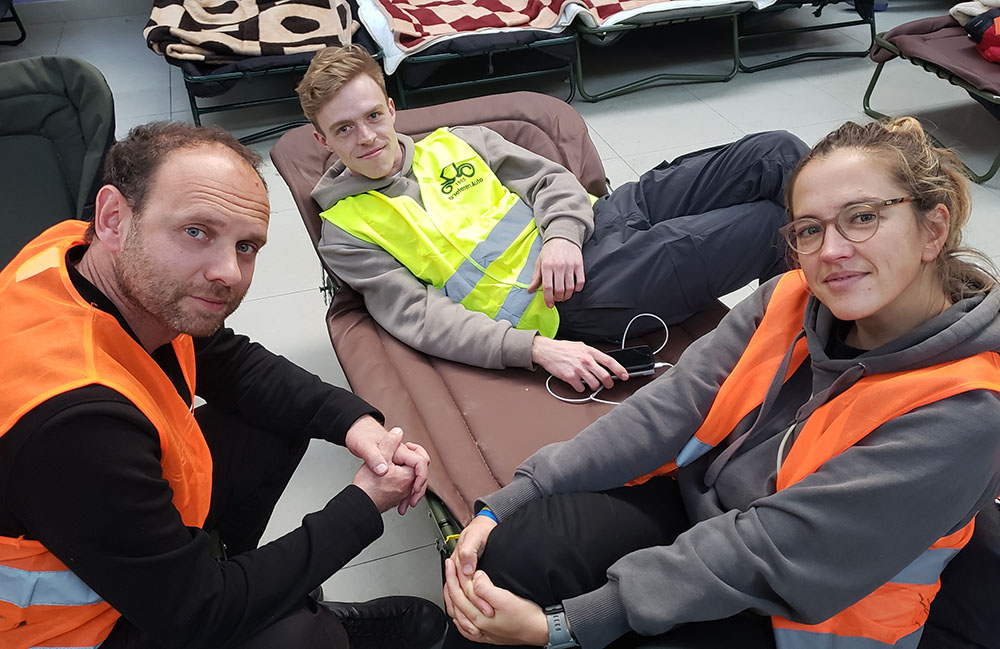 Ukrainian-American volunteer Lev Ivanov of Chicago, left, has worked at a refugee reception center outside of Korczowa, Poland, not far from the Polish-Ukrainian border. He has been joined by fellow volunteers Anastasiya Vaynraukh, right, and Hannes Cools, center, from Belgium. (NCR photo/Chris Herlinger)

"You have the best of humanity here, and across the border, the worst" said Ukrainian American volunteer Lev Ivanov of Chicago, referring to the humanitarian response near the border and the war raging within Ukraine.

He expressed exasperation at the crisis. "It's a war started out of nothing, out of lunacy," said Ivanov, who was raised in Kyiv and is now an acclaimed orchestra conductor who works in the Chicago area.

One of war's lunacies is the way it and its effects can change rapidly.

The shuttered shopping mall on the outskirts of Korczowa serving as the reception center was filled to near capacity on March 9, with cots row-to-row. 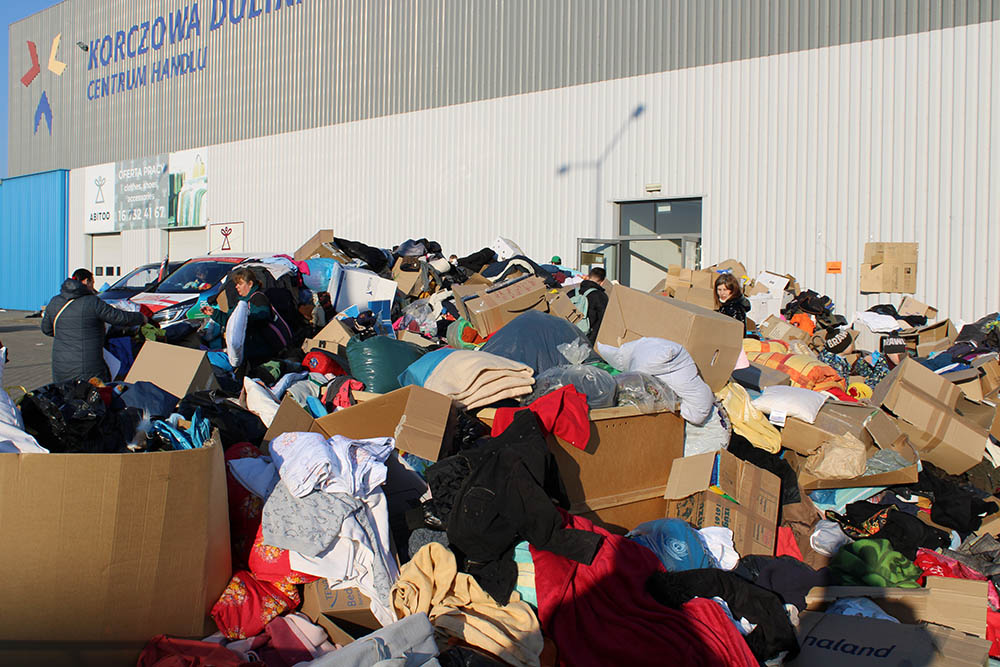 But four days later, the numbers had dramatically declined by about two-thirds in the public space dubbed "Kyiv Hall," with the Ukrainian arrivals having gone to their destination points.

Yet outside the center, mounds of donated clothing piled up, and vehicles containing humanitarian supplies from a number of European countries headed toward the border on the highway between Korczowa and Krakow.

The numbers of refugees at the reception point could increase again, depending on what happens in the course of the war. "It's like a wave," said volunteer Anastasiya Vaynraukh, an IT worker from Portugal. 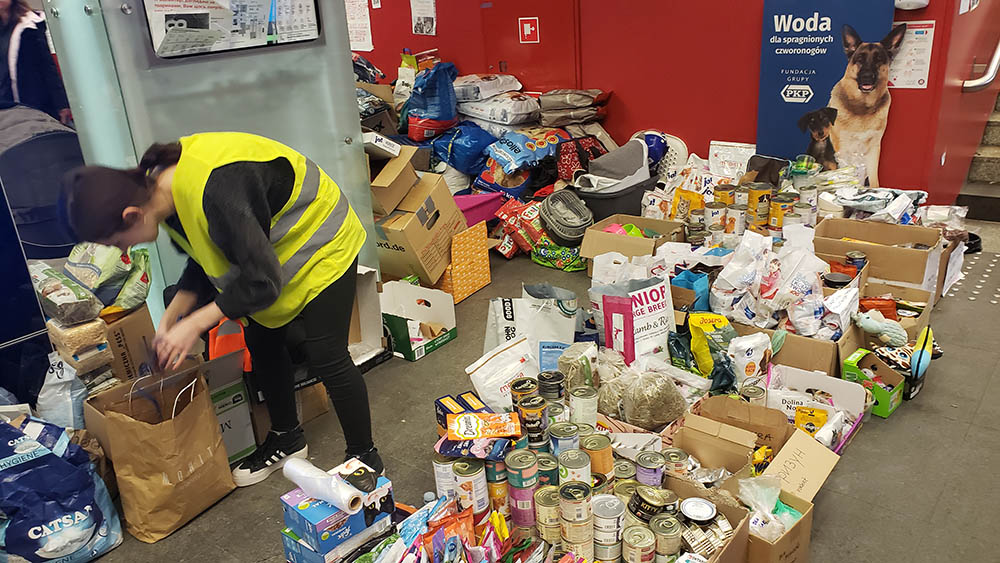 Volunteers welcoming refugees from Ukraine have also welcomed the refugees' pets, with this spot at the main train station in Krakow, Poland, providing pet food and supplies. (NCR photo/Chris Herlinger)

Korczowa is only about 15 miles from a Ukrainian military site shelled March 13 by Russian forces, killing 35 — a provocation that added to an already-tense situation.

The Caritas volunteer from Norway working in Przemyśl mused on the improbability of a war that months ago no one outside of Russia sought or even thought possible.

"You think we live in a civilized time," he said. "No one expected this. It's surreal to think we are experiencing a war like this in our time."

From the Polish capital of Warsaw, Jesuit Fr. Wojciech Mikulski agreed that the situation has a strong element of the surreal about it.

"I am from a generation that knows war only from movies," said Mikulski, 53, who heads the European Center of Communication and Culture, a Jesuit-run training and conference center now welcoming and housing refugees. 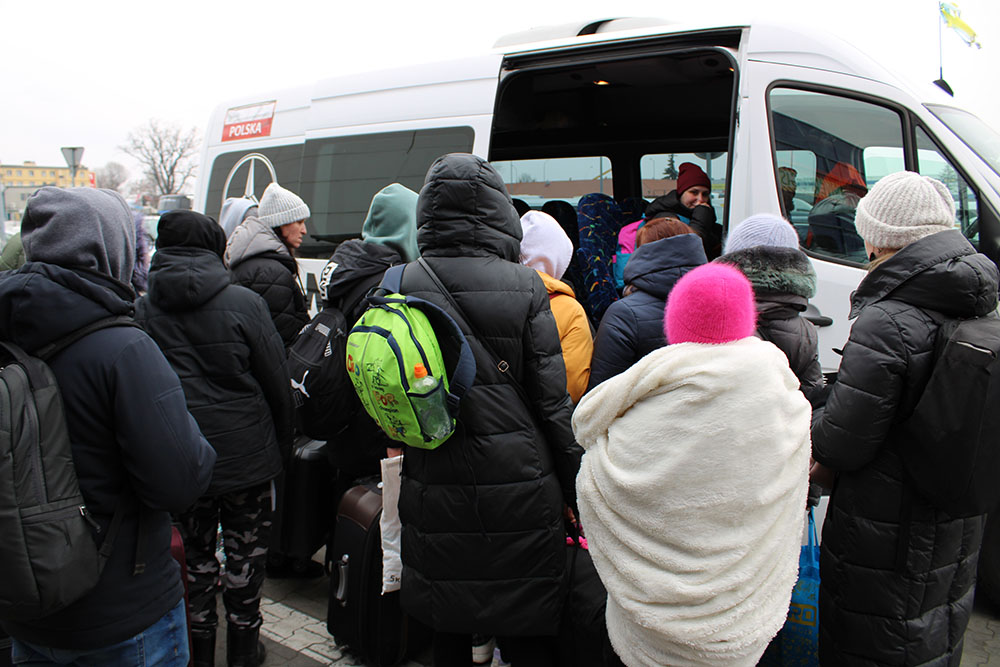 Ukrainian refugees at refugee reception center in Przemyśl, Poland, board a van taking them to buses or other transport and ultimately to their final destinations in Poland or other European countries. (NCR photo/Chris Herlinger)

Mikulski said he doesn't "know war from stories because my grandparents and parents were reluctant to talk about that time."

But now the daily reality Mikulski and others at the center face is welcoming refugees who often bring only one suitcase — if even that —when they arrive at the center's door.

"For three weeks now, I have seen that the victims of this war are women, children and old people, defenseless people, who came to us," he said in an email.

"With uncertainty they run away and do not know where they will get. Some people have an idea of what to do next. Others run as far as possible from the war."

The center housed one family — a young woman named Irina, her twin children and her grandmother, carrying "only small suitcases" with them — and then got them on the bus to Spain. 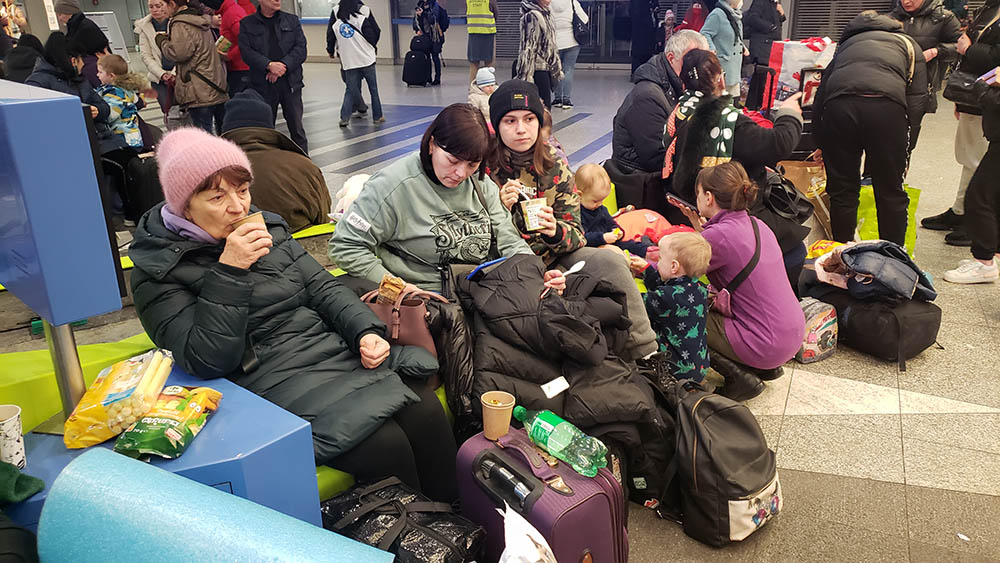 The main train station in Krakow, Poland, Poland's second largest city, has been a hub for new arrivals from Ukraine destined for other cities in Poland or other locales in Europe. (NCR photo/Chris Herlinger)

"Nobody knows Spanish. They don't know what will happen to them there. They found good and kind people who helped them get to Spain," Mikulski said. "What to do next is unknown. When I went on the bus with them, the grandmother asked Irina if she knew whether their house was still standing."

Those kinds of agonizing questions are being heard all across Europe right now.

Ukraine does not have a strong social safety net, Stawnychy of Caritas said, "so the biggest security for people is their homes and they're losing them. They're fleeing from the place that provides them their security."

"When you see the numbers, it's easy to slip into statistics, but behind every statistic is a face," she said. "A face, a human life."

A face like refugee Maryna Zozuliak, suddenly bound for a new country, an uncertain future and the ache for what was left behind: a home and a seemingly secure life.

This story appears in the War in Ukraine feature series. View the full series.
A version of this story appeared in the April 1-14, 2022 print issue under the headline: Facing an uncertain future.