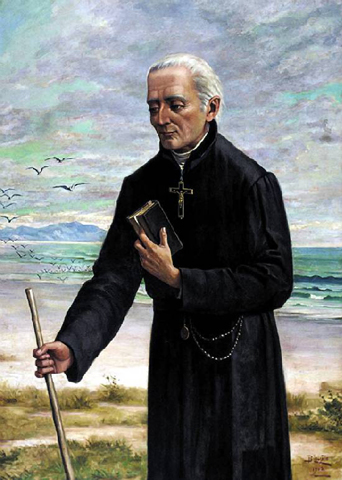 Without a canonization ceremony, Pope Francis declared three new saints for the Americas, pioneers of the Catholic church in Brazil and in Canada.

Pope Francis signed decrees Thursday recognizing: St. Jose de Anchieta, a Spanish-born Jesuit who traveled to Brazil in 1553 and became known as the Apostle of Brazil; St. Marie de l'Incarnation, a French Ursuline who traveled to Quebec in 1639 and is known as the mother of the Canadian church; and St. Francois de Laval, who arrived in Quebec 20 years after St. Marie de l'Incarnation and became the first bishop of Quebec.

In declaring the three saints, the pope used a procedure known as "equivalent canonizations," which required a thorough study of the candidates' life and writings, fame of holiness and reports of favors granted through their intercession. Unlike a regular sainthood process, though, it did not require the verification of a miracle through their intercession, nor further studies by historians and theologians working for the Congregation for Saints' Causes.

The three were beatified together by Pope John Paul II in 1980.

The Brazilian bishops, who thought the decrees would be signed Wednesday and planned local celebrations for that evening, have said they will celebrate a Mass of thanksgiving with Pope Francis April 24 in Rome's Church of St. Ignatius. The bishops of Quebec have said they will celebrate a thanksgiving Mass May 18 in Quebec and hope to have a larger celebration with the pope in Rome in October.

Despite the one-day delay in the announcement, parishioners kept filing into Our Lady of Assumption Church in Anchieta, Brazil, Wednesday to celebrate the new Brazilian saint. Many joined the celebration and morning Mass in the square outside the church, watching on large TV screens.

At 2 p.m., all of the Catholic churches in Sao Paulo rang their bells to celebrate St. Anchieta. Sao Paulo's Cardinal Odilo Scherer celebrated Mass at the city's cathedral and said St. Anchieta "should be considered the first anthropologist of Brazil because of his enormous interest in the indigenous population and their culture."

Cardinal Orani Tempesta, celebrating Mass in Rio de Janeiro, said it was "impossible to write about the history of Brazil without mentioning the presence of Jose de Anchieta."

St. Francois de Laval was born in 1623, studied in a Jesuit school, then joined a group of youths who formed what would become the Seminary of Foreign Missions. Ordained to the priesthood in 1647, he eventually was appointed apostolic vicar of New France, as Quebec was called, and ordained a bishop in 1658. He landed in Quebec -- a town of just 500 people -- the following June and began his missionary work among colonists and the native peoples. He died in Quebec in 1708.

St. Marie de l'Incarnation was born in 1599 and although drawn to the religious life, she followed her parents' wishes and was married at the age of 17. Six months after her son was born, her husband died. When the child turned 12, she entered the Ursuline order and, in 1639, set sail for Quebec with several other Ursulines. She died in Quebec in 1672.

St. Jose de Anchieta, was born in the Canary Islands in 1534 and joined the Jesuits at the age of 17. He was sent to Brazil, mainly for his health, but immediately dedicated himself to missionary work, learning the local languages and writing a grammar and dictionary used by Portuguese settlers and missionaries. He was ordained to the priesthood only after he had been in Brazil several years. He is credited with being one of the founders of Sao Paolo and Rio de Janeiro. He died in 1597 in Reritigba, the city now known as Anchieta.

The public Mass scheduled April 27 for the canonization of Blesseds John XXIII and John Paul II will be only the second canonization Mass Pope Francis has presided over. At a Mass in May last year, he proclaimed the sainthood of Antonio Primaldo and some 800 other Italians killed by Ottoman soldiers in the 15th century, Mexican Sister Maria Guadalupe Garcia Zavala, and Colombian Sr. Laura Montoya.

In addition to the three "equivalent canonizations" Thursday, Pope Francis signed decrees recognizing the miracles needed for the future canonizations of Blesseds Giovanni Antonio Farina, the Italian founder of the Teaching Sisters of St. Dorothy; Kuriakose Elias Chavara, the Indian founder of the Carmelites of Mary Immaculate, a Syro-Malabar Catholic order; Nicholas of Longobardi, an Italian Oblate priest; and Euphrasia Eluvathingal, an Indian Carmelite sister and member of the Syro-Malabar Catholic Church.

He also recognized the miracle needed for the beatification of Br. Luigi Bordino, an Italian member of the Brothers of St. Joseph Cottolegno, who died in 1977.

Pope Francis also declared eight men and women "venerable," recognizing they lived the Christian virtues in a heroic way. The eight included three Italians, three Spaniards, a Brazilian and Assumptionist Fr. Marie-Clement Staub, who was born in France and sent to the United States in 1909. At Assumptionist College in Worcester, Mass., in 1914 he founded the Sisters of St. Joan of Arc in 1914. He died in Quebec in 1936.

[Lise Alves in Sao Paulo contributed to this story.]