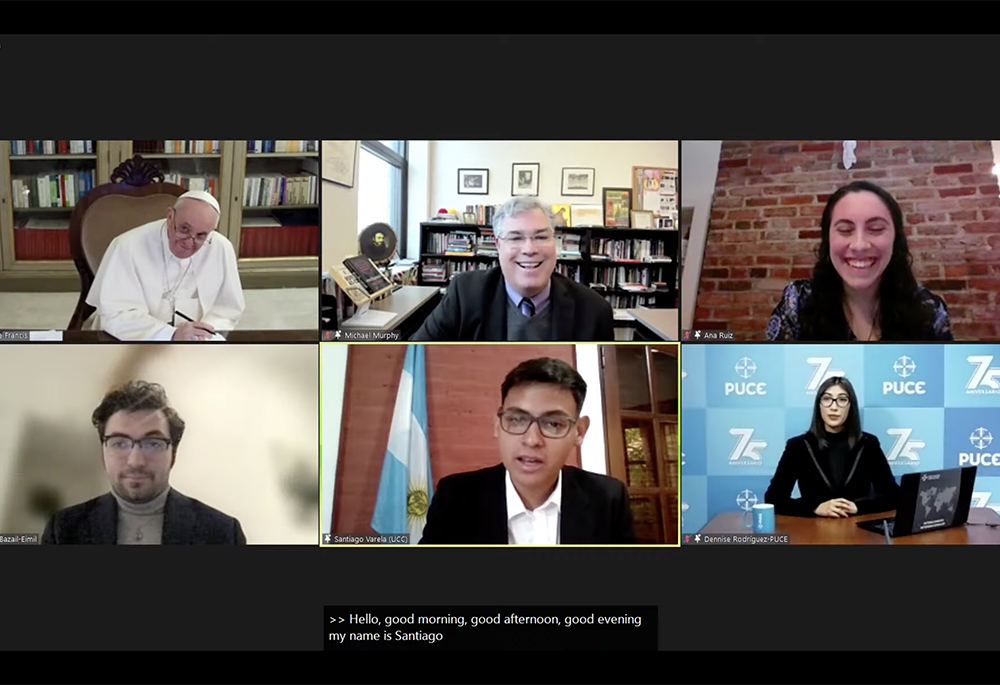 For nearly two hours on Feb. 24, Pope Francis listened to Catholic university students from across the Americas who shared with him their personal experiences, insights, frustrations and ideas pertaining to climate change and migration.

The pontiff took notes throughout the virtual dialogue, which Loyola University Chicago hosted in collaboration with Catholic universities and colleges in North, Central and South America, as well as the Caribbean. Sitting at a desk in front of a bookcase, Francis often smiled as he followed the dialogue on a laptop computer in front him.

"This is the vocation of Christians; to build bridges," said Francis, who told the participants that part of their mission as young adults was to leave a better world than the one they find themselves in now. The pope commended the students for their solidarity with those on the margins of society, especially migrants who are often exploited and dehumanized.

"Migrants have to be received. They must be accompanied. Migrants must be protected and migrants must be integrated," Francis said, speaking in Spanish-English translation on the event's YouTube feed.

The dialogue — which university officials believe was the first of its kind that Francis held with a U.S.-based university — grew out of Loyola University's efforts to participate in the 2021-23 Synod of Bishops on synodality. Francis and other church leaders have framed synodality as a decisive step in the church's renewal that the Second Vatican Council proposed more than a half century ago.

"The conversations today are the very expression of solidarity already in progress," Michael Murphy, director of the Hank Center for the Catholic Intellectual Heritage at Loyola, said during the dialogue's opening statements. 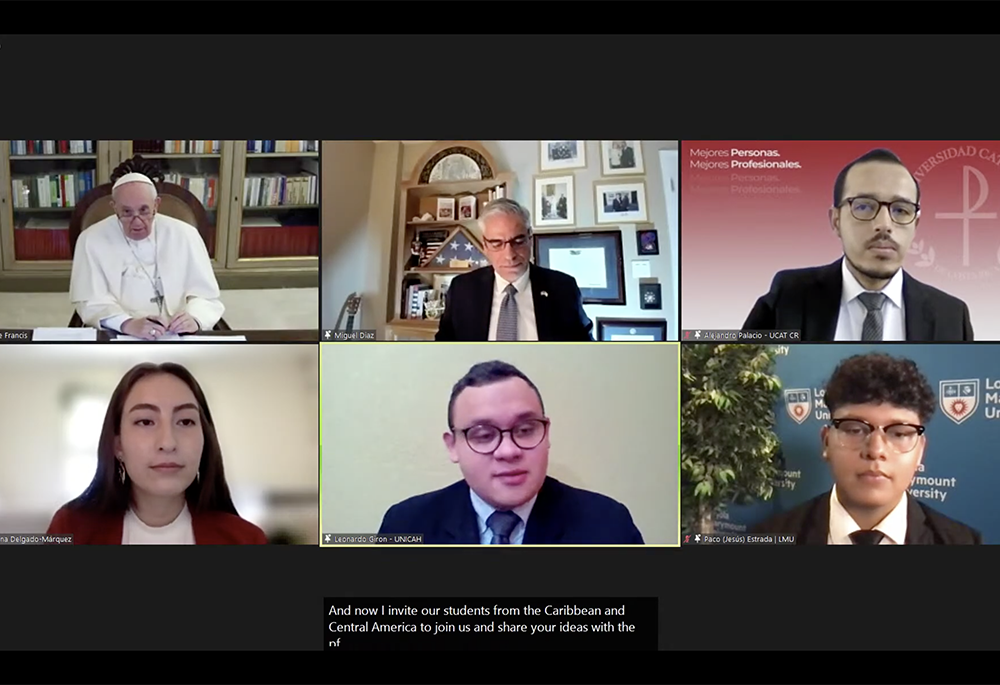 "This is truly a global event," said Murphy, who noted that 130 students from 58 universities in 21 countries across the Western Hemisphere participated in regional virtual synodal gatherings in the weeks leading up to the event. The students' compassion and sincerity, Murphy said, are a "blessing to us all, a leaven to a world in need."

Cardinal Blase Cupich of Chicago, speaking from the archdiocesan seminary in Mundelein, Illinois, offered a virtual blessing in which he said the spirit of synodality is "uniquely alive" in the hearts and minds of young people.

"These students understand the need to build bridges as opposed to erecting walls. That is the fundamental call of the Gospel, which is so important today as we hear about war in Europe," Cupich said, making a passing reference to Russia's invasion of Ukraine on Feb. 23.

Many of the students who participated in Loyola University's "Building Bridges Initiative" were migrants or children of migrants. Those who spoke during the dialogue told Francis about the discrimination that migrants in the Americas often face in finding sustainable employment and access to education and health care. They described how economic and political systems in the hemisphere exploited migrants for their labor without valuing their innate human dignity.

"The conditions of migrants today demand concrete response in our communities," said Eric Bazail-Eimil, a student at Georgetown University who was born in South Florida's Cuban exile community. Bazail-Eimil told the pope that students such as himself are eager to use their skills and energy to find solutions to the myriad of problems related to migration.

Among those difficulties, Bazail-Eimil and other participants said, is the seeming indifference of church leaders to devote time and resources to addressing their concerns. Bazail-Eimil commented that "too many bishops" today seem to be "unable to find ways to connect the Catholic tradition of hospitality" to welcoming migrants.

"Our generation values authenticity and deplores hypocrisy," said Henry Glynn, a student from Creighton University who added that his synodal regional group studied the root causes of today's irregular migration, which include climate change.

However, Glynn told Francis that while climate change displaces 20 million people annually and could create 1.4 billion climate refugees by 2060, U.S. Catholic leaders have not prioritized church teachings on care for creation or taken commensurate actions.

"In our experiences, priests never discuss climate change," Glynn said as he referenced a study co-authored by his fellow presenter, Emily Burke, that found few U.S. bishops have talked about climate change in the six years since Francis issued his encyclical "Laudato Si', on Care for Our Common Home." 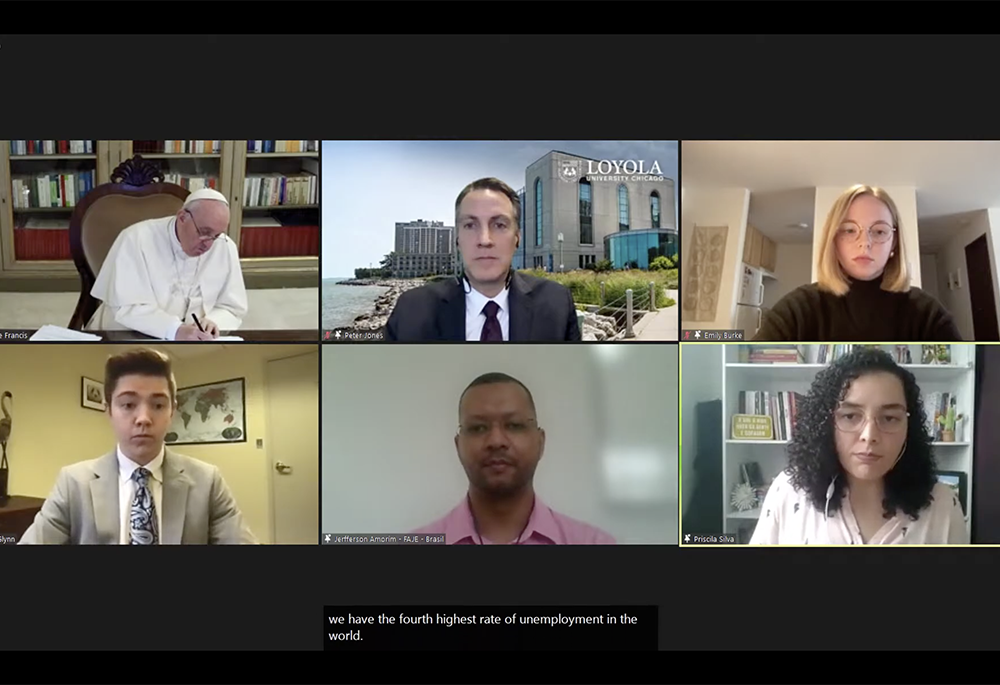 Responding to Glynn's comments, Francis acknowledged that the church has often not taken the lead on ecological issues despite the "clear Gospel-based message" that animates church teachings on care for creation. He linked that failure to lead with priests who do not follow his call for them to accompany their people and have the "smell of the sheep."

"Either you're a priest, a real pastor, or you're just a member of the establishment," said Francis, who added that "a pastor who is not close to [his] people is a pastor who lacks something."

Francis also lauded the students for advocating for a more harmonious lifestyle with creation. Violence, the pope said, "always destroys nature." He likened throwing plastics in the oceans to committing "violence against creation." 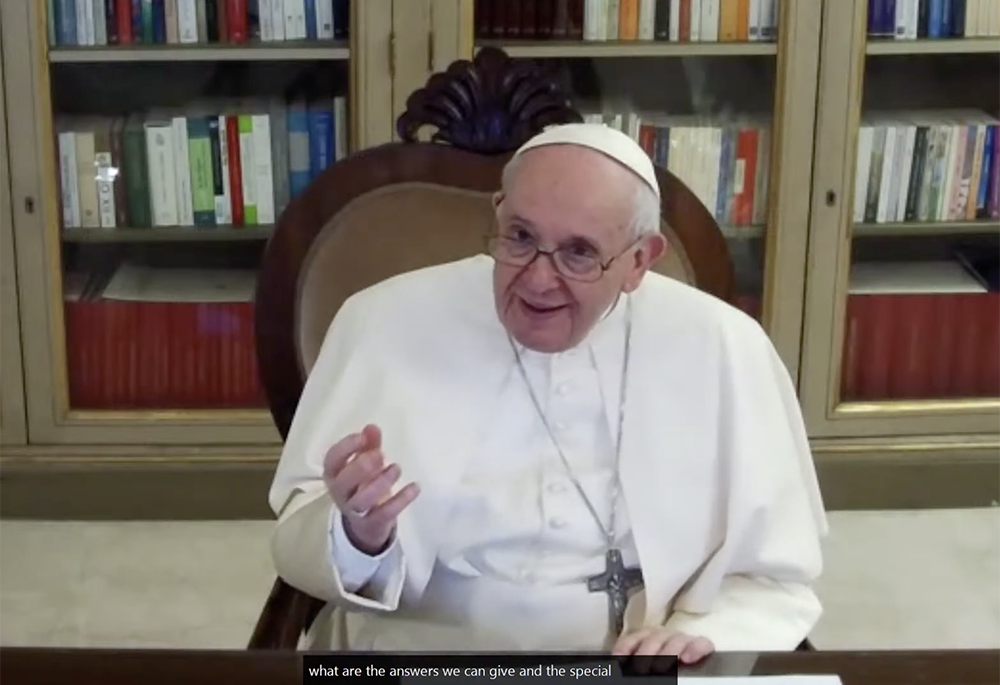 "Nonviolence is the way that brings us to sincerity. We have to reject hypocrisy. Hypocrisy poisons everything," said Francis, who added that sincerity helps people to live in harmony with the world and that authentic leadership is impossible without sincerity.

The pope also highlighted an insight he gleaned from the students' comments: that migrants who leave their home countries still value their heritage and cultural roots. He said accompanying migrants and integrating them into their host countries must be done in a manner that keeps those roots intact.

"We cannot integrate migrants by making them forget about their own roots, that is not integration," said Francis, who agreed with the students that the Catholic Church "has to get out of the door" and accompany its people in their everyday lives.

"A static church is a museum church," the pope said. "A synodal church should not be a closed church that doesn't care about the lives of anyone, and that is alien to everyone."

This story appears in the Synod on Synodality feature series. View the full series.
A version of this story appeared in the March 18-31, 2022 print issue under the headline: Francis talks with students across Americas.