Preaching care of the Earth with poetry 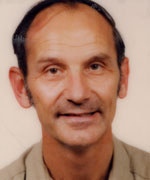 LAFAYETTE, LA. -- Louisiana is not quite like other places in the United States. Its distinctive food, plentiful music and humid heat set it apart. It’s also the site of a relentless war over clean air and water. The state’s cancer rates outpace the national average. Eighty percent of the coastal erosion in the country happens there. Together with nearby Texas, it has the highest population of petroleum refining and chemical plants. Much of the devastation wrought by the recent BP oil gusher will continue to plague the state’s waterways and wetlands.

The city of Lafayette in central Louisiana is the hub of the state’s oil industry, and a company town for offshore drilling operations in the Gulf of Mexico. Helicopters daily ferry workers and supplies out to the ships and rigs offshore.

Lafayette is also the home of Vic Hummert, environmental and peace activist, educator and haiku poet.

Just off the busy Kaliste Saloom trafficway in a one-story ranch house flanked by a garden and fig trees, Hummert and his wife, Roselyn, a hospital chaplain, staff an outpost and oasis for both care of the Earth and pithy poetry that in a few strokes states the key dilemmas facing both Louisiana and the planet in general. His haiku poems are featured on his Web page at vichummert.org and in five books.

Why don’t we fight for
Pure air, clean water, good food
As they fade from us?

A Maryknoll priest for 30 years, Hummert resigned in 1990, he says, because of the church’s treatment of women, specifically its refusal to ordain them. Since then he has been actively engaged in hospice, prison ministry and environmental education, using his poetry as a form of both outreach and evangelization.

Haiku is a poetic form from the Japanese culture. Haiku poets write about everyday things, using simple words and grammar. The most common form for a haiku is three short lines. Usually haiku expresses in pithy form sentiments about nature.

Hummer’s haikus are as distinctive as Louisiana, though they are often about the natural world.

A disciple of Fr. Thomas Berry, Hummert proclaims the late Passionist priest’s views about the interconnection between human and planet. “Survival is possible only if the nonhuman world is preserved, even revered,” Hummert says. His haikus gently underscore that theme and elaborate on it.

Earth will continue
Without humans who will not
Survive without Earth

Hummert credits his enthusiasm for protecting the environment to his upbringing in rural Illinois. “I spent summers on a farm, hearing the tree frogs and cicadas, the bullfrogs in the ponds. I’d go into a funk when I had to go back to town. I suffered from nature deficit disorder; I missed the farm so much.”

In 1994 in El Salvador, he met Ricardo Navarro, “who welcomed us to his country by warning us it was dangerous to drink the water, eat the food and to preach the Gospel. It’s right and proper to preach care of the Earth as part of the Gospel because there’s no salvation apart from decent air, water and food. The Earth is primary.”

Most of his poetry reflects on some aspect of this central fact, and the kinds of changes in our thinking and in our institutions that will reflect it.

Ordained in 1967, Hummert worked in Hong Kong from 1970 to 1982, working closely with Elsie Elliott-Tu. A missionary in mainland China until 1950, she settled in Hong Kong as a British subject. “Over 100 people a week came to her small Urban Council office for assistance with all types of problems. Her anger at the injustices experienced by people on the bottom was a source of energy driving her to work 18 hours a day well into her 70s.”

Hummert took a factory job in a toy factory for three months to learn the crude Chinese that workers used. His wage was $2.30 a day. “No air conditioning, it smelled of plastic and paint, but I learned a lot in there.”

He spent some time in Latin America also, before returning to the United States. After resigning from the priesthood, he lost his job as a hospice chaplain and worked odd jobs, including sacking groceries and tutoring high-school students, before he was hired in 2000 by the Lafayette Parish (county) sheriff as a chaplain in the jail.

“One out of every 55 Louisiana residents is behind bars, a higher incarceration rate than any other state. It is in the top 5 percent for illiteracy. I taught prisoners simple methods of meditation. It was simply the best parish I ever had.”

The rewards came from trying to help incarcerated women and men find spiritual freedom, along with freedom from drugs and alcohol, while serving time.

“ ‘I will never forget you, chap,’ said Mr. B., an inmate from Paris, Texas, jailed for two weeks for stealing a carton of cigarettes. He didn’t even get to smoke one.”

Inhale gratitude
Exhale trust in our loving
God who embraces all.

Hummert is a believer in mentoring. He was explaining to an eighth-grade class in an inner-city school the Chinese character for faith, trust or belief. It’s a person standing next to her words. “One student was so taken by that one word that he went on to gain a doctorate in Chinese studies.”

Hummert sums up his spirituality: “We are culturally coded for competition and profit in capitalist societies yet we are genetically coded for cooperation and kindness. The essence of our salvation is to be found in Ezekiel 36:26, where God promises to ‘remove the stony heart from within and give us a heart of flesh.’ Working with money as our primary motivation is a facet of the ‘hard heart.’ ”

Marketplace is not
Our primary force in life
For civilized folks

[Rich Heffern is an NCR staff writer. His e-mail address is rheffern@ncronline.org]

People | Preaching care of the Earth with poetry

2 Hispanic churches and too many tears: 100 COVID-19 deaths