Religion is part of holistic education of children, pope says 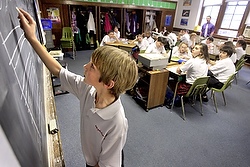 Sixth-grade student Brandon Miller does a math problem on the blackboard during class at Pope John Paul II School in Wilmington, Del., in April. (CNS photo/Don Blake, The Dialog)

VATICAN CITY -- A holistic education of children and young people must include religious education in accordance with the wishes of the children's parents, Pope Benedict XVI told Brazil's new ambassador to the Vatican.

The teaching of religion in public schools, "far from signifying that the state assumes or imposes a specific religious creed, indicates a recognition of religion as a necessary value for the holistic formation of the person," the pope said Oct. 31.

Welcoming Almir Franco de Sa Barbuda as Brazil's new ambassador, the pope said that when the Holy See and Brazil signed an agreement in 2008 on allowing religious education in public schools, the motivation was not to give Catholicism a special privilege, but to respond to the rights of parents to choose how their children should be educated and to give Brazil a new generation of citizens formed with a sense of morality and ethics.

The pope said offering students a "generic sociology of religions" class instead of a Catholic religious education course isn't good enough, because "there is no such thing as a generic, non-confessional religion," the pope said.

Catholic religion classes offered to public school children do not violate the separation of church and state, he said, because "healthy secularism must not consider religion simply as an individual sentiment that can be relegated to the private sphere," but as a reality in the lives of citizens and society.

Pope Benedict also used his speech as an opportunity to thank the Brazilian government for its willingness to have Rio de Janeiro host World Youth Day in 2013.

And he told the ambassador that the Brazilian government "knows it can count on the church as a privileged partner in all its initiatives aimed at the eradication of hunger and poverty."

Girzone, author of 'Joshua' novels, still wants to tell you something about Jesus