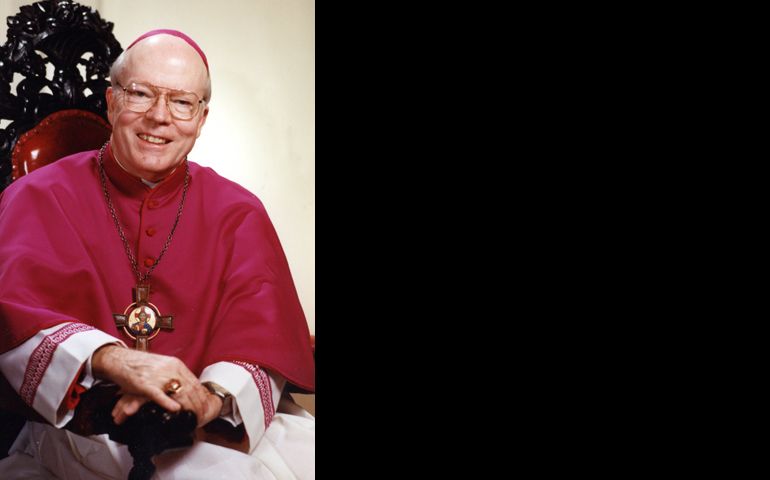 New Orleans — Retired Archbishop Francis B. Schulte, who served as the 12th archbishop of New Orleans from 1988 to 2002, died Jan. 17 after several weeks in hospice care at Mercy Fitzgerald Hospital in Darby, Pennsylvania, a Philadelphia suburb. He was 89.

In Philadelphia, the reception of Schulte's body will take place at the Cathedral Basilica of SS. Peter and Paul the morning of Jan. 25 followed by a viewing. Philadelphia Archbishop Charles J. Chaput then will celebrate a Mass for the repose of the soul.

In New Orleans, a wake for Schulte will be held Jan. 27 at Notre Dame Seminary. His body will be taken to St. Louis Cathedral Jan. 28 for a wake followed by a funeral Mass celebrated by New Orleans Archbishop Gregory M. Aymond. Archbishop Schulte will be buried in a crypt near the main altar of the cathedral.

"I think he brought a real fidelity to church teaching," Aymond said of Schulte, who was leading the New Orleans Archdiocese when Pope John Paul II named then-Msgr. Aymond as auxiliary bishop of New Orleans in 1996.

"He also brought a sense of pastoral care," Aymond added. "He was very committed to Catholic education since he had been a superintendent in Philadelphia and knew a lot about it. He also helped to stabilize the finances in our archdiocese. He redid the structure of our administrative offices. That was something that was needed, and I thought he did it very well."

He was ordained auxiliary bishop of Philadelphia in 1981 and was appointed bishop of Wheeling-Charleston, West Virginia, in 1985. He was named to succeed New Orleans Archbishop Philip M. Hannan Dec. 13, 1988, and was installed Feb. 14, 1989.

"I don't think there was a time in my life before ordination that I was not thinking of the priesthood," Schulte said in a 2002 interview with the Clarion Herald upon his 50th anniversary of ordination to the priesthood and retirement as archbishop. "From a young age, it was always there," he told the New Orleans archdiocesan newspaper.

Schulte grew up in Philadelphia as an only child. His father, who ran the family pharmacy, died when Frank was only 11. His mother, Katharine Bible Schulte -- named for Philadelphia heiress St. Katharine Drexel, who founded Xavier University of Louisiana -- imbued in him a love for the church.

His great uncle and uncle, both named Augustine, were diocesan priests in Philadelphia.

"They used to call them Old Gus and Young Gus," Schulte said. "My great uncle was rector of the North American College in Rome for two years and then came back to teach at St. Charles Seminary, my alma mater, for 53 years.

"My uncle, Young Gus, was a great parish priest and an avid hunter. In the 1920s when the KKK was strong in that area, they burned a cross on church property. As the story goes, he took out his gun and shot it out the window of the rectory. That was the end of the cross burning."

Schulte often used a construction analogy of "the four pillars" to describe the influence of the New Orleans Catholic Church on the wider community. The pillars he cited were Catholic schools, Catholic Charities, the Social Apostolate and Christopher Homes, the archdiocesan affordable housing program.

"I wanted to make all of us aware of the great contribution the church has made through these four pillars of social infrastructure," Schulte said. "The greatest contribution of the archdiocese is to the religious and moral fiber of our community. These efforts of the church go all the way back to 1727 [when the Ursuline Sisters arrived from France to open the first Catholic school in the United States], and each one has developed over the years."

Archbishop Schulte said one of the highlights of his tenure was proclaiming to Pope John Paul II the virtues of Redemptorist Fr. Francis Xavier Seelos, a Civil War-era preacher and confessor who was beatified in St. Peter's Square in 2000. Blessed Seelos died of yellow fever in New Orleans in 1867 while ministering to the German Catholic immigrants.

Hughes said Schulte's biggest contribution to the Archdiocese of New Orleans was "to bring an organizational structure to the archdiocese. He was very consultative, and he introduced consultative bodies as genuine consultative bodies. He developed the cabinet structure. That basic structure I inherited and did very little tweaking of it.

"Archbishop Schulte also was truly committed to Catholic education, especially Catholic school education. That was a significant investment of his priestly life and ministry when he was in Philadelphia, and he brought an appreciation for that to New Orleans and did everything that he could to strengthen the schools."

In Baton Rouge, Bishop Robert W. Muench recalled Schulte as his mentor and described him as "quintessentially a man of God and a man of the church."

"He was a genuinely spiritual, prayerful and Christ-like person, who deeply embraced his call as a baptized/confirmed disciple of Jesus, and ordained deacon, priest, bishop and archbishop of the Catholic faith," Muench, who served as vicar general under Schulte, said in a statement.

"Gifted with an incredibly brilliant intellect, he was a clear and forceful teacher of that faith, an eloquent preacher of the Word [who could speak spontaneously like an accomplished poet], a talented and dedicated administrator, and a skilled executive who utilized process as his style of leading. He was also an engaging conversationalist, with an acute sense of humor."

Ordained a priest of the New Orleans Archdiocese, then-Fr. Muench was named an auxiliary bishop of New Orleans in May 1990. He was appointed bishop of Baton Rouge in December 2001 after serving five years as bishop of Covington, Kentucky.

"To me personally, [Archbishop Schulte] was a very specially treasured friend, mentor, inspiration and companion whom I will always remember with deep fondness and gratitude," Muench said. "May he rest in peace of the risen Christ."

In his retirement, Schulte remained in New Orleans until Hurricane Katrina struck in August 2005. He had been diagnosed with prostate cancer, and doctors encouraged him to return to Philadelphia for successful radiation treatment.

However, in 2006, Schulte grew increasingly frail and had three falls within a short time frame. Doctors insisted that he be sent to an assisted living facility, Villa St. Joseph, which was home to retired priests.