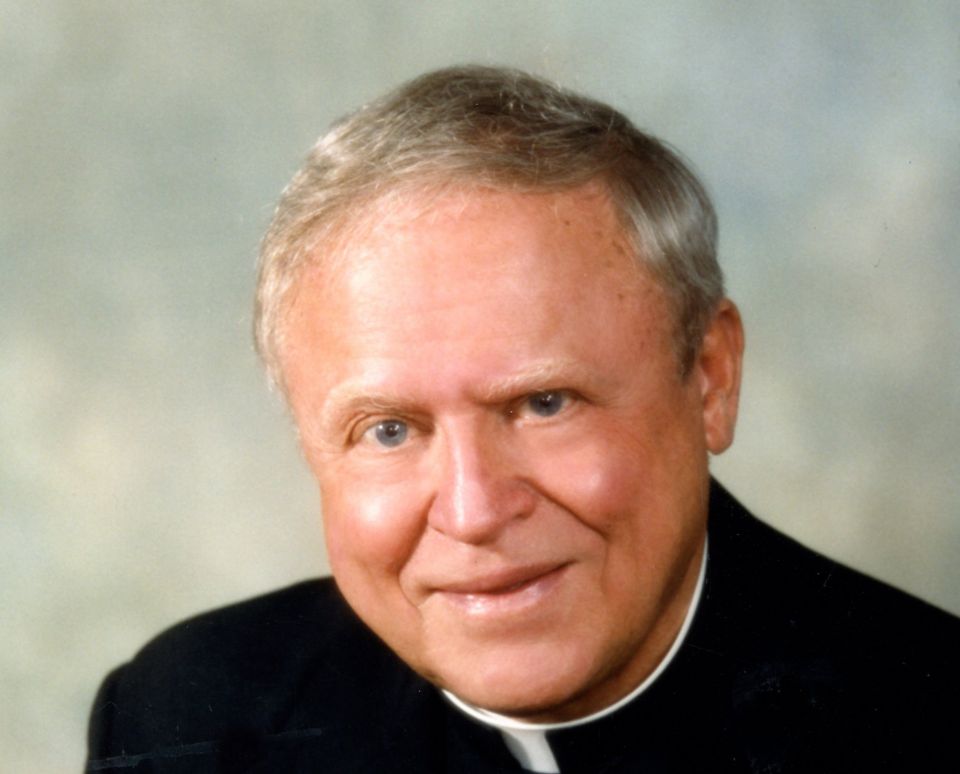 Retired Bishop Frank Rodimer of Paterson, N.J., died Dec. 6 at St. Joseph's Home for the Elderly in Totowa at age 91. He is pictured in an undated photo. (CNS)

Paterson, N.J. — Retired Bishop Frank Rodimer of Paterson died Dec. 6 at St. Joseph's Home for the Elderly in Totowa. He was 91.

When Rodimer became the sixth bishop of the diocese Feb. 28, 1978, he had the unique distinction of being installed as the only priest of the Paterson Diocese to have ever been raised to the episcopacy. He retired in 2004. Earlier this year, he moved St. Joseph's Home.

For much of his retirement, Rodimer resided in Green Pond and in those years he served the diocese whenever he could.

"Every day I still pray for the people of the diocese and their intentions and I always hope today to still encourage my brother priests in whatever way I can to continue this very important ministry," he once said.

Rodimer's body will be received the afternoon of Dec. 14 at the Cathedral of St. John the Baptist in Paterson, followed by viewing until 7 p.m. and then vespers. His funeral Mass will be celebrated Dec. 15 at the cathedral.

All of his years of ministry to the church were spent in the Paterson Diocese. He knew every bishop of the diocese personally. When he decided to be a priest, it was the Paterson's first bishop, Bishop Thomas McLaughlin, from whom he had to ask permission to become a seminarian.

His ministry to the people of the Paterson Diocese began May 19, 1951, when he was ordained to the priesthood at the cathedral.

During his years as a priest before becoming bishop, he served as parochial vicar of St. Brendan Parish in Clifton, Our Lady of the Lake Parish in Sparta and St. Paul Parish in Clifton, where he was pastor for 10 years. He later served as assistant chancellor of the diocese and secretary of the tribunal.

He was the first diocesan director of sacred liturgy and he was a member of the editorial board of The Advocate, the Newark Archdiocese's newspaper, which then also served the Paterson Diocese.

He was secretary for Paterson Bishop James Navagh and attended the Second Vatican Council with him in June 1963. He was appointed diocesan chancellor in December 1964, and in April 1966, he was appointed secretary of the diocesan board of consultors. He also served as chairman of buildings and sites.

As bishop, he served as leader of the diocese for 26 years until his retirement in May 2004. During his ministry as bishop, he established 12 new parishes, ordained 91 priests and 179 permanent deacons and confirmed more than 100,000 Catholics.

In 1999, he supported a bill introduced in the state Legislature to abolish capital punishment in New Jersey.

"Precisely because we love and cherish the gift of life, we are challenged to oppose the death penalty," Rodimer said. "Those who have so little regard for life as to take it from someone else, though deserving of severe punishment, should not reduce us to their level."

On the eve of the 1993 Super Bowl, he called on parishes and institutions of his diocese to halt trips to Atlantic City casinos and to consider ruling out gambling as a fundraiser.

Stopping short of banning bingo as a parish fundraiser, he said "there have to be better ways of doing the work of Jesus than by calling out bingo numbers or selling raffle tickets."

Calling Super Bowl weekend the "occasion of the most illicit wagering all year," Rodimer said small-scale office pool betting was "innocent enough" but placing bets with bookmakers and others involved in organized crime was wrong.

A 1992 pastoral letter of his, "Put Our Children First," listed a comprehensive plan Catholics can undertake on behalf of children. "I fear for a society which deplores but does little or nothing to address the horrible daily realities which many of our children face," Rodimer said.

In 1991, he testified on behalf of the U.S. bishops in support of a bill to ban permanent replacements to striking workers.

He committed the diocese to the full implementation of the Rite of Christian Initiation of Adults. He likewise established the policy that the Sacrament of Confirmation be administered to young people in their sophomore or junior year of high school.

During the 1980s, Rodimer established the three-year fundraising campaign "Share His Vision," which raised $3 million for purchase of land in the diocese for future parish sites and major capital repairs to parish buildings in urban areas of the diocese.

He also spearheaded the creation of the Tri-County Scholarship Fund, which provides scholarships to needy students. The Cathedral of St. John the Baptist underwent major repairs and liturgical renovations in preparation for the diocese's 50th anniversary. Rodimer rededicated it on Dec. 19, 1987.

He appointed a task force which in 1989 approved a plan to assist the homeless that calls for providing them with emergency, transitional and permanent housing. It committed the diocese to use its land and buildings "where appropriate and available" to provide affordable and transitional housing.

Born Oct. 25, 1927, in Rockaway and raised there, Frank Joseph Rodimer attended Seton Hall Prep School in South Orange and St. Charles College in Catonsville, Maryland, which was a minor seminary.

He went St. Mary's Seminary in Baltimore, Immaculate Conception Seminary in New Jersey and The Catholic University of America in Washington, where he received a licentiate in sacred theology in June 1951. He returned to the university after his ordination for graduate studies. He received his doctorate in canon law in 1954.

On the national level, Rodimer was a member of the U.S. Conference of Catholic Bishops' Committee on the Liturgy. He served on the bishops' Administrative Committee and he was chairman of the Committee for the American College at Louvain, Belgium.