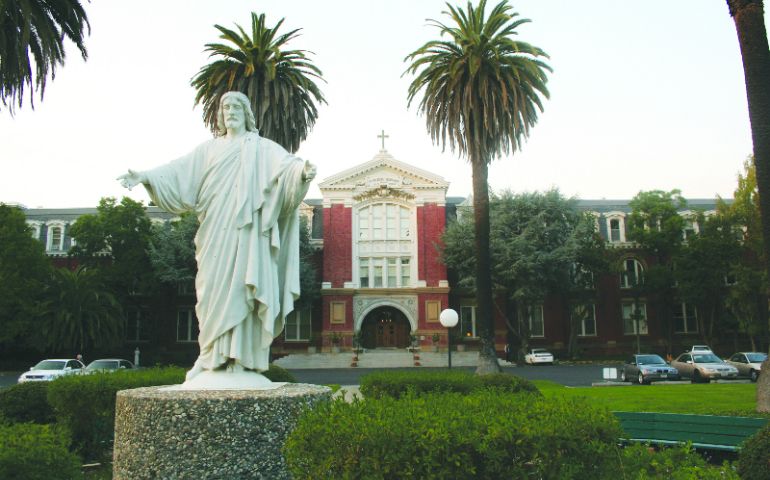 In a brief letter to priests of the San Jose diocese dated Feb. 10, Bishop Patrick McGrath announced that he had "decided to transfer current seminarians and send our future seminarians to the University of Saint Mary of the Lake Mundelein Seminary of the Archdiocese of Chicago."

The letter does not mention St. Patrick's Seminary and University in Menlo Park, about a half-hour drive from San Jose, but it describes where the 11 San Jose seminarians currently enrolled there — and future ones — will study after the end of the current academic year, marked by graduation May 17.

The San Jose diocese's exit from St. Patrick's comes less than four months after the Society of the Priests of St. Sulpice's surprise announcement that it would be severing its 118-year relationship with the seminary, effective June 30.

"As you know, some time ago, I established a commission to study and recommend to me which seminary would best serve our local Church in the preparation of our seminarians for ordination to the priesthood," McGrath's letter begins, adding: "The commission has recently completed its work."

The bishop then states that Mundelein "which has an excellent program of spiritual, academic and pastoral preparation" would be the selection.

The letter's timing left a weekend between the announcement and the Feb. 13 annual campus gathering of bishops and vocations directors from dioceses which place students at St. Patrick's.

Asked if McGrath and San Jose vocations director Fr. Joseph Kim would be attending the Feb. 13 meeting, a diocesan spokesman said, "They always do." He said the timing was "just coincidental."

According to the official, the study commission was formed in 2014 with a "diverse make-up — including lay, religious, priests, Hispanic, Anglo, Vietnamese."

"The departure of the Sulpicians was one of the factors that the commission considered in making its recommendation to the bishop," he said, but noted, "The report is a confidential document." The San Jose move "should not be seen as a reflection upon the quality of seminary leadership or administration," he added.

The spokesman told NCR that San Francisco Archbishop Salvatore Cordileone, U.S. Sulpician Provincial Fr. John Kemper, and St. Patrick's President-Rector Sulpician Fr. Gladstone Stevens "were informed of this decision at the same time it was shared with the clergy and religious of the diocese."

No other bishops were given a heads-up about the pending decision's announcement, the spokesman told NCR.

"Feedback has been minimal thus far," he said. "Some surprise, but all generally supportive."

Cordileone was not available for immediate comment, San Francisco communications director Mike Brown said in a Feb. 13 email, adding, "The letter from Bishop McGrath to his presbyterate is the information that was shared with us. No direct impact has been assessed."

According to St. Patrick's website, eight California dioceses plus the San Francisco archdiocese sponsor students at St. Patrick's, as do the dioceses of Honolulu and Reno.

Only the San Francisco archdiocese has as many students at St. Patrick's as San Jose. No religious order seminarians currently attend.

Over the weekend, NCR attempted to contact vocations directors and/or communications directors in the sponsoring dioceses for reactions to the San Jose decision. Five had responded by Feb 13.

Staying with St. Patrick's or not

In an email sent after the Feb. 13 bishops-vocations director meeting at St. Patrick's, Honolulu Bishop Larry Silva wrote, "While I am disappointed that San Jose has decided to withdraw its seminarians from St. Patrick's Seminary, I have decided to keep our seminarians there."

A St. Patrick's trustee, Silva lauded the seminary staff and faculty for "working very hard — and successfully I found out today — at assuring a solid and bright future for the seminary. Not only is the search for new faculty and a new rector moving along, but I think they have a great vision for the future and the continual improvement of their programs."

"Transitions are not easy, but I am confident that the current faculty is doing all it can to not be 'lame ducks,' " the bishop added. "If they were in a 'lights out' mode, I am sure they would not be dedicating so much time to assuring, to the best of their ability, that the seminary will thrive in the future."

Silva called decisions on a diocese's priestly formation "extremely important for any bishop" in that "it will affect not only the present seminarians but the future of the diocese for generations."

Monterey, Calif., diocesan vocations director Fr. Roy Shelly said his diocese currently has 14 men in various stages of seminary training. Three remain at St. Patrick's, one of whom will graduate in May and is scheduled to be ordained in June.

"The diocese of Monterey stopped sending men to Menlo Park three years ago," Shelly said in an email. "Under the current circumstance, we do not intend to send men again to St. Patrick's for the foreseeable future."

Monterey has one seminarian studying at Mt. Angel Seminary in Saint Benedict, Ore., one at Assumption Seminary in San Antonio, Texas, and nine at St. John's Seminary in Camarillo, Calif.

Fr. Frank Epperson, director of seminarians for the Santa Rosa, Calif., diocese, said, "The decision of the San Jose diocese will have no bearing on our decision-making process. Over the past few years we have found many good things beginning to happen at St. Patrick's under the leadership of Archbishop Cordileone, and thus we plan to continue our support of and attendance at the seminary."

Santa Rosa has two seminarians at St. Patrick's and plans to send another there in the fall, Epperson said.

The Santa Rosa diocese also has one seminarian studying at the Pontifical North American College in Rome and four enrolled at St. Gregory the Great Seminary in Seward, Neb.

The Fresno, Calif., diocese's vocations director, Fr. Daniel Avila, said the diocese has "23 men in formation," one of whom attends St. Patrick's.

The Fresno diocese, Avila added, "is attentively following the developments at St. Patrick's. We have our annual meeting with the faculty there this Monday [Feb. 13] and hope to have a clearer picture after."

Asked how San Jose seminarians were reacting to the decision, a diocesan official said, "The seminarians, who were informed of this decision prior to its communication to others, seemed to understand and to accept the decision."

Total St. Patrick's enrollment stands at 63, including men serving pastoral-year assignments off campus. Student head-count reached a recent-history high mark of 114 for the 2012-13 school year, but it had dropped to 93 for the 2013-14 term.

By contrast, Mt. Angel enrolls 159 seminarians from 23 dioceses and five religious communities, according to its website. It also has 35 lay students.

A Sulpician, who asked not to be identified and is familiar with St. Patrick's situation, said enrollments are down in many U.S. seminaries, but described the St. Patrick's decline as "striking."

Asked if the archdiocese had projected enrollment figures for the coming school year, San Francisco spokesman Brown said, "The sending bishops are presently in their annual process of making decisions about sending seminarians for the term beginning this fall. Too early to project enrollment."

In his email, Silva stated, "The seminarians of the diocese of San Jose currently represent 17 percent of the student body, so their departure will be quite significant. But the hope is that other dioceses will join the seminary once they see that there is a quality faculty to take the place of the Sulpicians."

Leadership after the Sulpicians

In the Oct. 21 notice that the Sulpicians would be leaving St. Patrick's, Kemper said the society had "recently been informed that we are no longer invited to provide Sulpician administrative leadership to St. Patrick's. As a consequence, we will not be able to serve the seminary according to the Sulpician tradition."

Tension between the Sulpicians and the archdiocese over St. Patrick's administration is not new. In September 2013, Cordileone, then-San Jose Auxiliary Bishop Thomas Daly and then-archdiocesan vicar for administration Fr. James Tarantino met with then-President-Rector Sulpician Fr. James McKearney, leaving McKearney no option but to resign, according to McKearney at the time.

McKearney's termination caught many off guard. Neither the U.S. Sulpician provincialate nor the St. Patrick's board of trustees had been consulted.

Daly now heads a search committee to find a new leader for St. Patrick's. As of Feb. 14, no response to NCR requests for comment from Daly on the San Jose development had been received. A St. Patrick's graduate and trustee, Daly was director of vocations for the San Francisco archdiocese from 2002 to 2011.

"The search for rector is ongoing, and several additional new candidates have recently been added," Brown said in the email. "We anticipate the position being filled within a month or two."

As for faculty positions to be vacated by the six Sulpicians currently serving at St. Patrick's, Brown said, "The Sulpician faculty leaving this summer created three full-time positions available and these positions have all now been filled. An additional two full-time teaching faculty will likely be hired."

The Sulpicians' announced departure generated deep concern and conversation in Bay Area Catholic circles. More than 2,000 priests and some 40 bishops were educated by the Society at St. Patrick' s and its related college seminary, St. Joseph's, which is now closed.

"They made the decision," Daly told Catholic San Francisco, the archdiocesan newspaper, at the time of the announced Sulpician complete exit. "There was no discussion with the board of trustees. They had made up their mind" the day before a scheduled trustee meeting and had voted to withdraw. "So there was no collaboration in the decision."

The Sulpicians' decision, Daly reportedly said, came as the seminary board of trustees was seeking to negotiate a change in the governance structure to a more "collaborative" model similar to Assumption Seminary in the San Antonio archdiocese where Sulpicians contribute staff.

"There are misconceptions about the program at St Patrick's Seminary," Daly told Catholic San Francisco. "Some see it as too conservative. The seminary is a solid program of priestly formation."

One St. Patrick alumnus, now the pastor of Danville's St. Isidore Parish in the Oakland diocese, shared his appreciation for the Sulpicians in the Oct. 30, 2016, parish bulletin, praising them for providing "us a vision of Church which was wide and inclusive, not narrow and blinkered."

In the bulletin message, Fr. Gerard Moran also charged that "the Sulpicians have been on a collision course with Archbishop Cordileone since his appointment to San Francisco."

Moran criticized what he called Cordileone's "obsessive compulsive micromanagement" and appealed to previous San Francisco archbishops to "use their influence in Rome to see the Sulpician decision is not irrevocable."

Cordileone was bishop of Oakland for three years before being named to San Francisco in July 2012.

US bishops tweet their criticism of Pope Francis' meeting with Biden