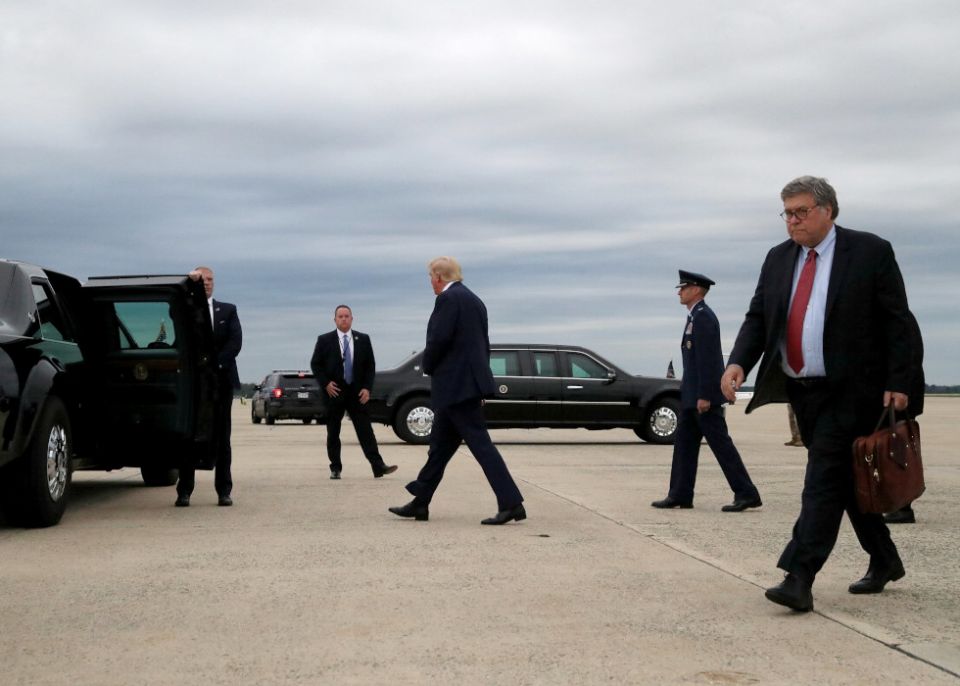 Attorney General William Barr walks to his car in Washington upon arriving aboard Air Force One following a day trip to Kenosha, Wis., Sept. 1, 2020. (CNS/Reuters/Leah Millis)

Albuquerque, N.M. — The Santa Fe Archdiocese's Office of Social Justice and Respect Life called on National Catholic Prayer Breakfast officials to withdraw its plans to honor U.S. Attorney General William Barr with a special award at its Sept. 23 event because he is a Catholic who supports the death penalty.

At the breakfast, being held virtually this year because of the pandemic, Barr is scheduled to receive the Christifideles Laici Award, which is named for St. John Paul II's postsynodal exhortation. The award is given "in honor and gratitude for fidelity to the church, exemplary selfless and steadfast service in the Lord's vineyard."

The archdiocesan office it was "appalled" the group will honor him "in light of the fact he just recently began executions of federal prisoners; something that has not been done since 2003."

"Catholic teaching on capital punishment — the death penalty — is clear," it said in a Sept. 18 statement, quoting the Catechism of the Catholic Church: "The church teaches that 'the death penalty is inadmissible because it is an attack on the inviolability and dignity of the person, and she works with determination for its abolition worldwide.'"

The Office of Social Justice and Respect Life statement follows the same plea the organization withdraw the award from Barr issued by the Association of U.S. Catholic Priests and the Catholic Mobilizing Network in statements released earlier in September.

In an email sent early Sept. 15 to Catholic News Service, a spokeswoman for the National Catholic Prayer Breakfast said the organization's officials declined to comment on the two groups' statements.

The priests' association also had called out Auxiliary Bishop Robert E. Barron of Los Angeles, the scheduled keynote speaker for the breakfast, saying he was to "confer the award virtually" and asked him "to withdraw from that role."

A spokesman for Barron's Word on Fire Catholic Ministries told CNS Sept. 14 the bishop "is simply an invited speaker" for for the event. On Sept. 19, the Association of U.S. Catholic Priests issued a new statement pointing out it had mistakenly said Bishop Barron would confer the award.

The Santa Fe archdiocesan office noted in its statement that "we here in New Mexico worked tirelessly with many faith-based and community groups to eliminate the death penalty for New Mexico. In 2009, New Mexico became the 15th state to abolish the death penalty and to replace it with life in prison without the possibility of parole.

"As of today, there are 30 states that have abolished the death penalty, while 20 states and the federal government still allow executions."

Referring to data from the Death Penalty Information Center, it said, "The federal death penalty applies in all 50 states and U.S. territories but is used relatively rarely. About 60 prisoners are on the federal death row, most of whom are imprisoned in Terre Haute, Indiana." 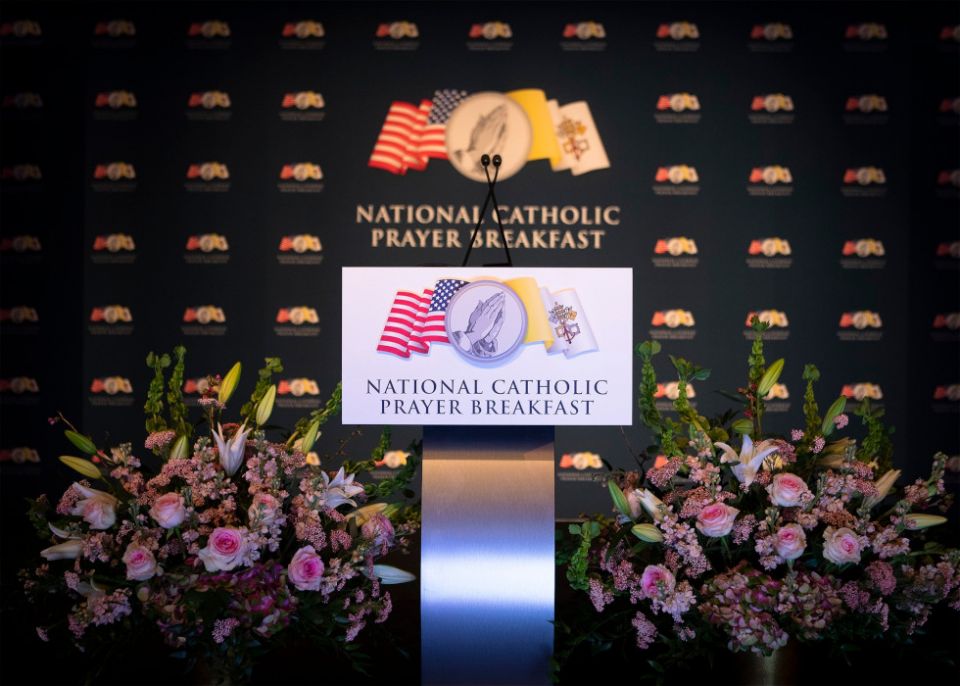 The stage of the National Catholic Prayer Breakfast is seen in Washington April 23, 2019. (CNS/Tyler Orsburn)

The Santa Fe office criticized Barr for lifting the 17-year-old moratorium on the use of the federal death penalty; Barr reinstated it July 25, 2019, for five death-row prisoners convicted of murdering children.

The first of the five was Daniel Lewis Lee, a 47-year-old who was convicted of being an accomplice in killing three family members in 1996. He died July 14. The second execution was of 68-year-old Wesley Purkey, convicted of raping and murdering a 16-year-old in 2003, on July 16. The third was of Dustin Honken, a meth kingpin, on July 17. He who was convicted in 2004 for the murder of five people in 1993, including two children, in an effort to thwart his prosecution for drug trafficking.

Two more federal executions are coming up in Terre Haute, one before the Sept. 23 breakfast and one after, as those opposing the honor for Barr pointed out.

"There are numerous serious reasons to oppose the death penalty: the dignity of both victim and perpetrator, the routine inconsistent application of capital punishment, the fact that mistakes are irreversible, the exorbitant cost of the appeals process, and a lack of correlation between the death penalty and crime deterrence," the Santa Fe statement said.

"As Catholics, we acknowledge the inherent dignity and sacredness of all. We work to protect all life, whether it be a child in the womb, a person without a home, a refugee family, an elderly person at the end of life, a victim of a crime, or a person on death row," the statement said.

"There is no justifiable reason to support government-sponsored execution as punishment for even the most heinous crimes. We possess means in today's society to render the perpetrators harmless through life in prison without parole," it added.