Scalia had a passion for a brutal hobby 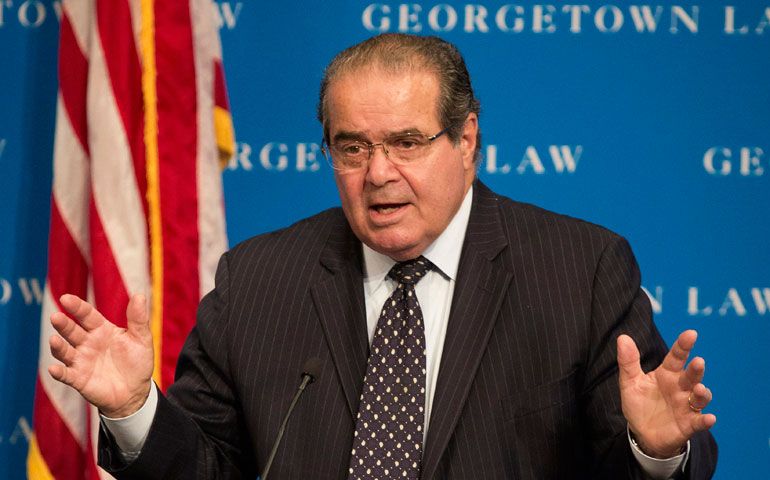 On what was to be, unpredictably, the last day of his life in mid-February, Antonin Scalia did have death on his mind. At least not his own. The Supreme Court justice, 79, had come by private plane to Cibolo Creek Ranch, a remote luxury game preserve in West Texas near the Mexican border that is a haven for the moneyed class. Lodging tops out at $800 a night.

Scalia, freeloading, had his weekend tab picked up by the resort's owner. A man driven by many passions -- fidelity to the original meaning of the Constitution, Catholicism, conservative politics -- Scalia was at Cibolo Creek to happily indulge another one: killing animals. This time it was a chance to slaughter blue quails.

Cibolo Creek specializes in captive hunting. Guests can pick the tame creatures they want to kill, from small fowl to larger species like mountain lions or bison. The Humane Society of the United States condemns captive hunts as "cruel and brutal" that offer the fenced-in quarry "absolutely no chance of escape."

The overblown eulogistic chatter heaped on Scalia in the immediate days following his death hailed him as a jurisprudence giant and a legal icon for the ages. Amid that was the darkness that he took pleasure in aiming guns and firing bullets into the flesh of trapped animals.

His vigor for killing was on display when he told Joan Biskupic in her Scalia biography, American Original, that his favorite prey was the wild turkey: "There's something wonderful about hearing them. Have you ever heard a turkey gobble? It's a very strange sound, like a wooden rattle. ... Turkeys are very wily creatures. They have superb eyesight and they're very cautious. You get one shot. If you miss, the whole day is ruined."

One ruination came in 2003, when Scalia and his gun-loving buddy, Vice President Dick Cheney, flew on Air Force Two to Louisiana to kill ducks. A few weeks before, the Supreme Court had agreed to hear Cheney v. U.S. District Court for the District of Columbia, in which Cheney was involved as an appellant.

Members of the Senate, along with newspaper editorials, seeing an obvious conflict of interest in which a friend would be ruling on a friend, called on Scalia to recuse himself from the case. He refused, contemptuously claiming that his judicial ethics were not to be questioned by the ill-informed masses. In a 7-2 decision the case was sent back to a lower court where it was eventually dismissed.

When asked about the lawsuit in a Q&A after a speech at Amherst College, The Associated Press reported that Scalia said it did not involve Cheney as a private citizen: "This was a government issue. It's acceptable practice to socialize with executive branch officials when there are not personal claims against them. That's all I'm going to say for now. Quack, quack."

Scalia's enjoyment of killing animals is traceable to his childhood in Elmhurst, Queens, N.Y., when he took the lives of rabbits with a long-barrel shotgun. At Xavier High School in lower Manhattan, where Jesuits required students to join the ROTC, he mastered gunmanship. It would one day lead him to slaughter an eight-point antlered elk which he mounted in his office as a trophy and, for sure, a delusional tribute to his manhood.

Scalia's indifference to the suffering he inflicted on animals twinned with his disregard for the hurtful consequences that his court decisions and dissents had on racial minorities, women, the LGBT community, death-row inmates and immigrants.

For one example, in a 2003 case that expanded gay rights, Scalia wrote in a minority dissent: "Today's opinion is the product of a Court, which is the product of a law-profession culture, that has largely signed on to the so-called homosexual agenda, by which I mean the agenda promoted by some homosexual activists directed at eliminating the moral opprobrium that has traditionally attached to homosexual conduct."

For nearly 30 years on the court, the Georgetown- and Harvard-educated Scalia came off as a showboat who sided with the privileged and powerful while relishing partisan combat in which he saw his brainpower superior to all, whether he was leveling fellow justices as misguided dullards or body-slamming lawyers in oral arguments.

Self-identified as a Catholic justice, he was in the archconservative Newt Gingrich, Pat Buchanan and Jeb Bush wing of the church, with little evidence that he appreciated the thinking of Dorothy Day, Dan Berrigan or Thomas Merton in the opposite wing.

[Colman McCarthy has been on the adjunct faculty at Georgetown University Law Center for 28 years.]

Column | Scalia had a passion for a brutal hobby