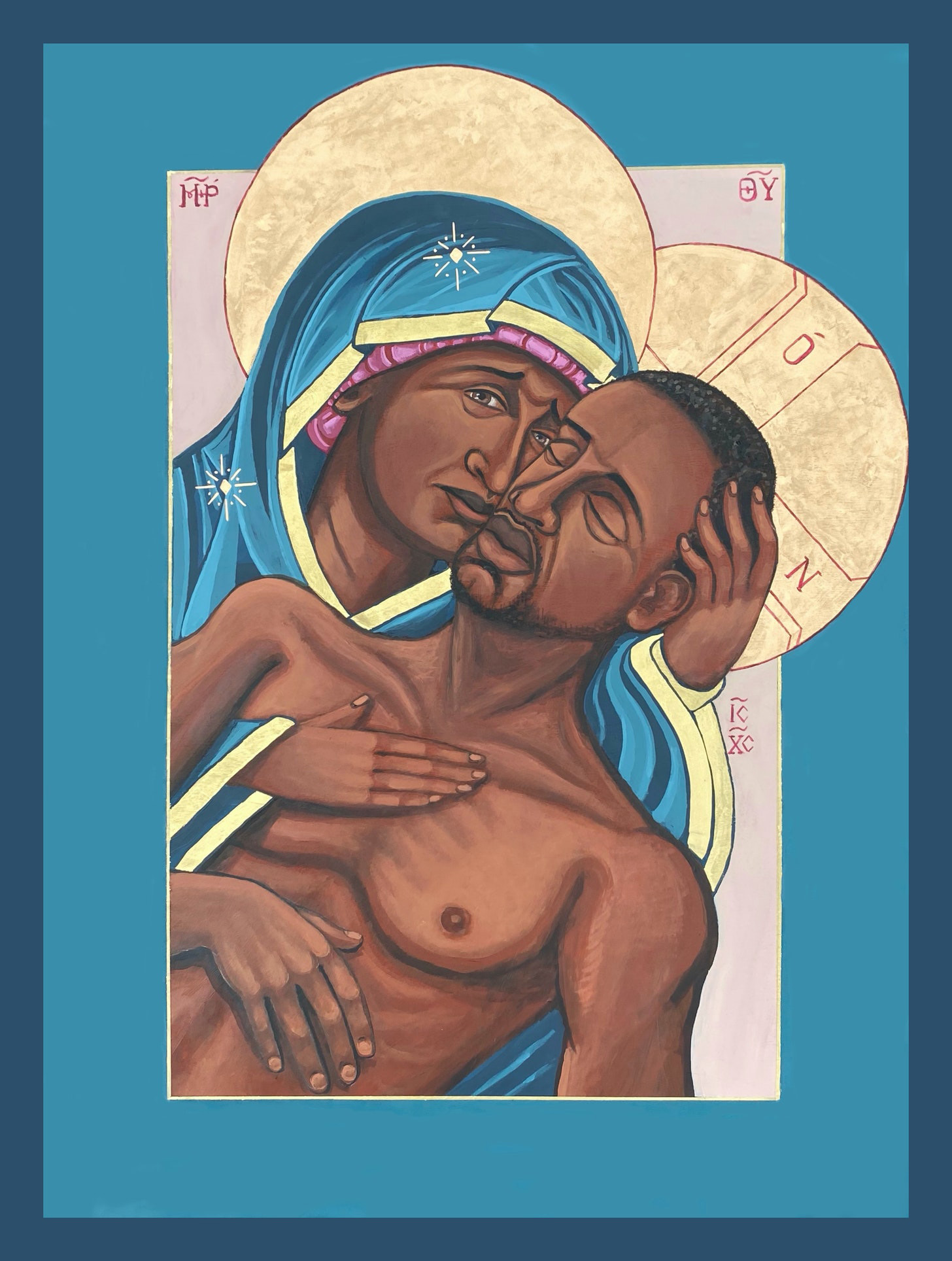 A second painting of Jesus and his mother, Mary, in which Jesus is widely thought to be depicted as George Floyd, has been stolen from the walls of the Catholic University of America’s law school.

The painting, which sits outside the chapel at CUA’s Columbus Law School, replaced an identical, larger version of the same painting that was also stolen last month after it was highlighted in conservative media and the artist received death threats.

CUA spokesperson Karna Lozoya confirmed to Religion News Service that the replacement painting, which uses an artistic style known as a Pietà to depict a Black Virgin Mary cradling Jesus’ body after his Crucifixion, was stolen Sunday afternoon.

"We have reported the crime, and we are working with the Metropolitan Police Department to investigate both this and the earlier theft of a larger print of the icon that was stolen Nov. 24," Lozoya said in a statement. "We ask all members of our community to please contact the Department of Public Safety with any information about either of these crimes."

The painting, titled “Mama,” sparked controversy in November when the Daily Signal, a website owned by the conservative Heritage Foundation think tank, published a lengthy article about its presence at the school. The article sparked an online petition calling for its removal, and the painting was stolen from the university’s walls less than 24 hours later.

Meanwhile, the St. Louis-based artist, Kelly Latimore, said he began receiving a deluge of death threats. He told RNS that at the time many of the threats were overtly racist or specifically targeted Floyd, whose murder at the hands of a white police officer in March 2020 sparked nationwide racial justice protests.

When asked the question “Is it George Floyd or Jesus?” in reference to the painting, Latimore says he usually answers “yes.”

“I believe Christ is in that image, just as much as it would be in a ‘normal’ Pietà — the European version of Christ,” Latimore said. “In Matthew’s Gospel, Jesus asks us to find him in all people, especially those who suffer as George Floyd did.”

School officials defended the painting after it was stolen the first time. They suggested they did not see it as depicting Floyd as Jesus — “That is not how we read it,” read a statement — and rebuffed efforts to remove it, citing a “no cancellation” policy. School administrators promptly replaced it with a smaller version.

But pushback continued, and CUA student government reportedly passed a resolution on Dec. 6 calling on school officials to replace the painting with “other forms of art that represent diversity and bring forth representation of the African American community in a non-political and uncontroversial way.”

However, various religious leaders have continued to defend the painting. Missouri’s Episcopal bishop, the Rt. Rev. Deon Johnson, told RNS last month that depicting Jesus as George Floyd is not sacrilegious but “if anything … more sacred, because here was a real person who became an image of Christ.”

He added: “Why is the image of a Black man who was publicly lynched such a challenge to religious people?”

Depictions of Jesus vary widely throughout history, including within Catholicism. Varying images of Jesus are not always without controversy, however: The Vatican’s own Pontifical Academy for Life tweeted out an image in September 2020 of a Pietà featuring a Black Jesus, triggering backlash from conservative Catholics in the United States.

Fabrizio Mastrofini, a media manager for the academy, told RNS in an email that “North American conservative ‘Catholics’” falsely suggested the image was a specific endorsement of the Black Lives Matter movement or a comment on the ongoing U.S. presidential election. However, Mastrofini noted the image was, in fact, meant to be a “message against the racism” in all countries.

He also pushed back against those who oppose altering “sacred” images, saying, “Catholicism does not adore pictures or sculptures.”