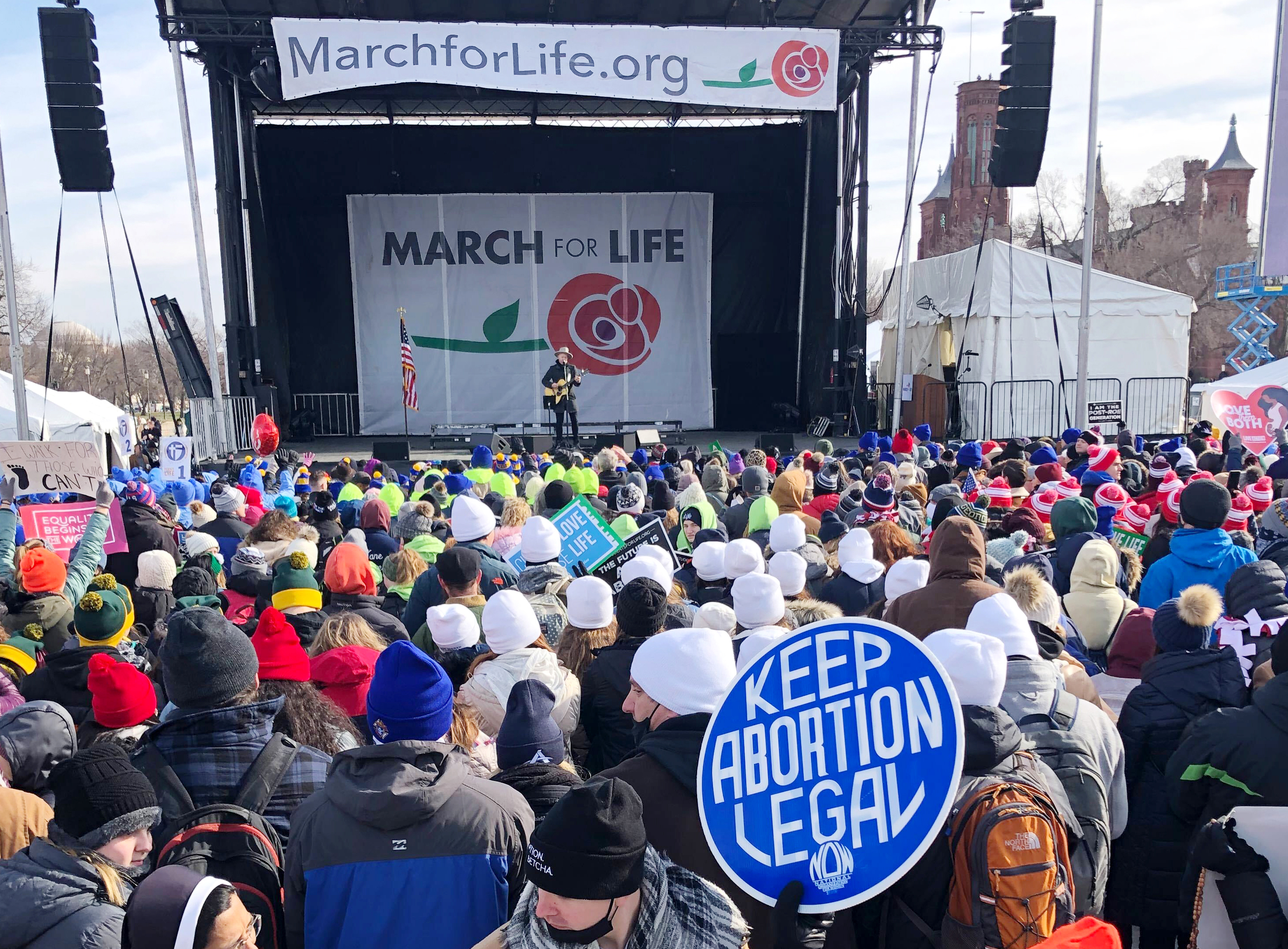 People attend the March for Life rally on the National Mall in Washington, Friday, Jan. 21, 2022. The March for Life, for decades an annual protest against abortion, arrives this year as the Supreme Court has indicated it will allow states to impose tighter restrictions on abortion with a ruling in the coming months. (AP Photo/Susan Walsh)

WASHINGTON  — Arriving by the busloads, thousands of anti-abortion protesters rallied in the nation's capital Friday with a growing sense of optimism that their goal was finally in reach: a sweeping rollback of abortion rights.

The March for Life, for decades an annual protest against abortion, was held as the Supreme Court has indicated it will allow states to impose tighter restrictions on abortion with a ruling in the coming months — and possibly overturn the landmark 1973 Roe v. Wade ruling that affirmed the constitutional right to an abortion.

"It doesn't feel real. There's so much hope and vibrancy and happiness and joy at this thing," said Jordan Moorman of Cincinnati. "I really do believe that we're in a post-Roe generation."

The rally, held on the anniversary of the Roe decision, is taking place amid a COVID-19 surge that limited turnout at the National Mall. Some abortion opponents posted on the event's Facebook page that they will not attend because of COVID-19 vaccine mandates for people going to restaurants and other places in the District of Columbia.

Still, the rally drew a crowd of thousands on a sunny but frigid day, with a heavy contingent of young people and students bussed in by schools and church groups. The mood was overwhelmingly optimistic, with many treating the end of Roe v Wade as an inevitability.

"Hopefully this will be the last March for Life," said Father Andrew Rudmann, a Catholic priest from New Orleans, who was attending his 11th event.

Rudmann said previous marches may have had larger crowds but he doesn't recall this level of optimism. He said the crowds grew "gigantic" under former President Donald Trump and the movement's enthusiasm grew with each Trump Supreme Court appointee. He proudly pointed out that his home Archdiocese of New Orleans includes the Catholic high school that educated Trump's last appointee, Supreme Court Justice Amy Comey Barrett.

"Sometimes I would come to the March and it would be great to be united with people who share my beliefs, but there would also be this heaviness," he said. "This time the whole language and vibe is different."

Abortion rights groups worry that at least 26 states are in line to further limit abortion access if Roe is weakened or overturned. In December, the court indicated in a major case that it would uphold a Mississippi ban on abortions after 15 weeks of pregnancy, and allow states to ban abortion even earlier. The Mississippi case directly challenges Roe.

Courts have also dealt Texas abortion providers a string of defeats over efforts to block a law that since September has banned abortions once cardiac activity is detected, which is usually around six weeks and before some women know they are pregnant. Another loss for Texas clinics came Thursday, when the Supreme Court refused to speed up the ongoing challenge over the law, which providers say is now likely to stay in effect for the foreseeable future.

"This law is cruel and unconstitutional, and I am deeply disappointed that our judicial system has done very little to stop it," said Amy Hagstrom Miller, president of Whole Woman's Health, which operates four abortion clinics in Texas.

Lawmakers from both parties weighed in Friday to note the anniversary of Roe v. Wade and reflect on the shifting political landscape surrounding abortion.

"It has been an eye-opening year for the cause of life in America, and we have made significant progress in defending our youngest and most vulnerable," said Rep. Kevin McCarthy, the Republican leader in the House.

"The stakes are higher than ever, with the health and autonomy of women and families across the country hanging in the balance as Republicans work to methodically challenge and overturn Roe," said Sen. Jeanne Shaheen, D-N.H. "It's time to sound the alarm and make clear: decisions about our bodies, our health care and our future belong to us."

Mississippi state Sen. Joey Fillingane, a Republican who pushed for the state's strict abortion laws, said he is not able to attend the March For Life in Washington but is pleased that he and two GOP colleagues will be recognized there. Mississippi has just one abortion clinic, and Fillingane said the state should next target access to abortion-inducing medication.

If Roe were nullified, Fillingane said he expects states to take different approaches to setting their own abortion laws.

"I think that's the way it should be," he said. "The laws in California, based on their population and what they want, may be very different than the laws in Mississippi based on what our population feels about the issue of life."