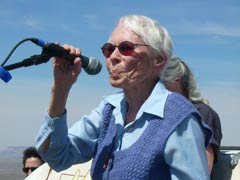 Sr. Rosemary Lynch speaks at the entrance to the Nevada Test Site in 2007 during a Sacred Peace Walk organized by the Nevada Desert Experience.

Franciscan Sr. Rosemary Lynch, lifelong peace advocate and cofounder of Pace e Bene, died Jan. 9 after being hit by a car. She was 93.

Lynch was walking in her neighborhood with Franciscan Sr. Klaryta Antoszewska when a car backing out of a driveway hit her. She fell, causing a concussion, internal bleeding, and fractures. She died four days later at the hospital.

“Sr. Rosemary was one of the great teachers and models of Gospel nonviolence in the United States,” said Jesuit Fr. John Dear, a friend of Lynch and a former board member of the Nevada Desert Experience, an organization Lynch help found to protest nuclear weapons.

“She embodied the peace of Christ, not only as a very gentle, loving person but as a prophetic witness against war and nuclear weapons,” Dear told NCR.

Born in Phoenix, Lynch grew up near the desert, a place she felt was sacred. She loved the Catholic Franciscan parish she attended. With the Franciscan influence surrounding her and the move of her brother to attend the Franciscan seminary in California, she joined the Sisters of St. Francis of Penance and Christian Charity in 1932, taking vows in 1934.

Lynch worked in Catholic schools for the first part of her life as a sister, teaching in a secondary school in Los Angeles and acting as principal in Montana in 1952.

In 1960, she was elected to the central administration of the Franciscan sisters, headquartered in Rome. “This event was truly the beginning of my life education, opening my eyes to many new realities,” Lynch wrote a few years ago in reflection about her life.

During her 15 years there, the Second Vatican Council occurred, which gave new life to religious communities and Lynch’s work as a sister. She became a resource for church law among congregations. She also was responsible for visiting some of her congregation’s provinces in Indonesia, Mexico and Africa. Lynch wrote that her time abroad pushed her toward a commitment to nonviolent social change.

“I became acutely aware of the structural injustices causing misery in many impoverished countries, painful oppression of women and mistreatment of children, diseases, many curable, rampant for lack of medicine,” Lynch wrote.

She returned to the United States in 1977, at which point she joined the staff of the Franciscan Center in Las Vegas. Lynch began visiting the Nevada Test Site when she moved to Las Vegas. She sought more information about the site, and learned the last protest there was in 1957. So she and a group of friends gathered at the gates of the site to mark the 20th anniversary of that demonstration, to protest the site’s production of nuclear weapons, and to remember the bombing of Hiroshima, Japan, during World War II.

The Las Vegas Franciscan Center, where Lynch worked, celebrated the 800th anniversary of the birth of St. Francis of Assisi with a 40-day period of prayer at the Nevada Test Site during Lent of 1982, an idea proposed by Lynch and others. This prayer service eventually evolved into the Nevada Desert Experience, a movement and an organization that conducts “spiritually-based events near the Nevada Test Site in support of peace and nuclear abolition,” according to its Web site.

“She spoke passionately on behalf of peace and nuclear disarmament over a period of 30 years,” said Anne Symens-Bucher, Nevada Desert Experience cofounder. “She was just tireless, even into her 90s -- still active and being a voice in today’s world of Franciscan values.”

In February 1989, Lynch, Julia Occhiogrosso and Peter Ediger met with Franciscan friars Alain Richard and Louis Vitale to develop a “Franciscan service in nonviolence and cultural resistance,” which resulted in Pace e Bene (“peace and good” in Italian). They established an office on the west side of Las Vegas. Pace e Bene now has offices throughout the United States and a growing number throughout the world. More than 25,000 people have participated in 600 Pace e Bene nonviolence workshops, according to the organization’s Web site.

“I experienced Sr. Rosemary as a person with sharp intelligence and perception, along with a beautiful and intelligent heart,” said Ediger, now Pace e Bene’s resources coordinator.

Lynch was able to “bridge the divide” and see all people as human beings, a quality that gained her admirers on both sides of any issue with which she concerned herself, Ediger said.

“Her life will continue to bear good fruit for many, many years to come,” Dear said. “Though she was in many ways not well-known, her influence is impossible to measure because of what she did through the Nevada Desert Experience and Pace e Bene. She was truly a leaven of peace in the church and in the country.”

A memorial was scheduled for Jan. 23 in Las Vegas. Funeral arrangements were pending as of yesterday.

As of Jan. 11, Las Vegas police were continuing their investigation of the accident.

Welcome is mixed for gays on Catholic campuses