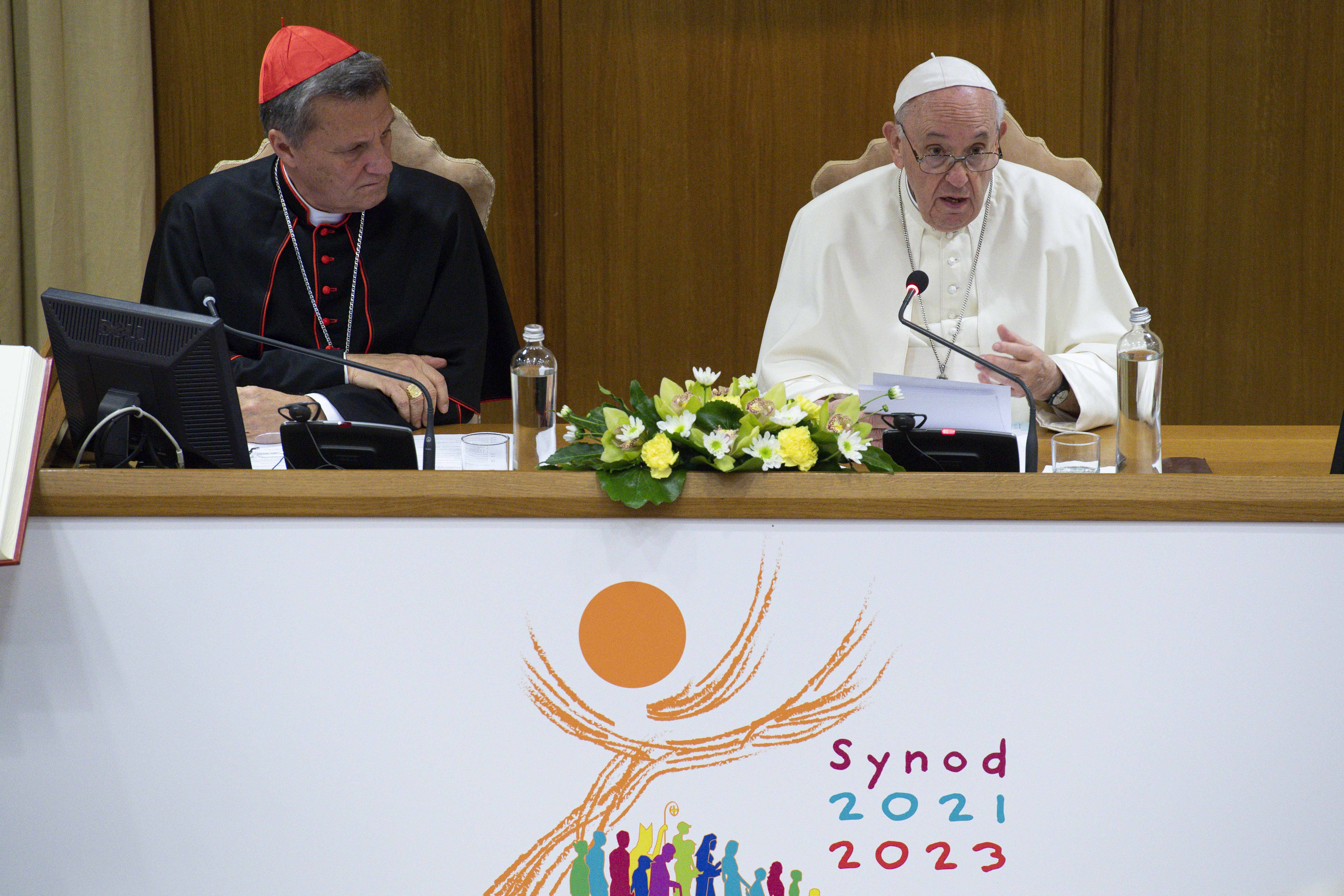 Pope Francis speaks as Maltese Cardinal Mario Grech, secretary-general of the Synod of Bishops, looks on during a meeting with representatives of bishops' conferences from around the world at the Vatican in this Oct. 9, 2021. (CNS photo/Paul Haring)

VATICAN CITY — All Christians are invited to pray for unity and continue to journey together, said Cardinals Mario Grech, general secretary of the Synod of the Bishops, and Cardinal Kurt Koch, president of the Pontifical Council for Promoting Christian Unity.

Toward that end, the two offices came together to offer a prayer, which could be added to the other intentions during the Week of Prayer for Christian Unity Jan. 18-25.

Inspired by the theme of this year's Week of Prayer, "We saw the star in the East, and we came to worship him," the prayer "offers a propitious occasion to pray with all Christians that the synod will proceed in an ecumenical spirit," the two cardinals said in a joint news release Jan. 17.

"Conscious of our need for the accompaniment and the many gifts of our brothers and sisters in Christ, we call on them to journey with us during these two years and we sincerely pray that Christ will lead us closer to him and so to one another," they said.

"Heavenly Father, as the Magi journeyed toward Bethlehem led by the star, so by your heavenly light, guide the Catholic Church to walk together with all Christians during this time of synod. As the Magi were united in their worship of Christ, lead us closer to your Son and so to one another, so that we become a sign of the unity that you desire for your church and the whole creation. We ask this through Christ our Lord. Amen."

Cardinals Koch and Grech have been highlighting ways the local churches can implement an ecumenical dimension of the synodal process given that "synodality and ecumenism are processes of walking together," they wrote in a joint letter dated Oct. 28, 2021, sent to bishops responsible for ecumenism within their episcopal conferences.

The Catholic Church inaugurated a synodal process, titled "For a Synodal Church: Communion, Participation, Mission" in October 2021. It will lead to a general assembly of the Synod of Bishops in October 2023.