Talking Francis and capitalism in the belly of the beast 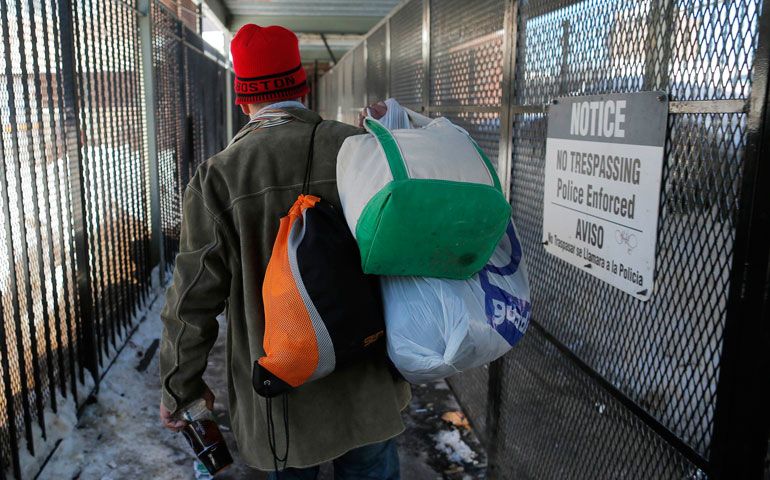 Mack Donohue, who has been homeless since 2008, carries his belongings into a shelter in Boston Feb. 27. (CNS/Reuters/Brian Snyder)

Carthago delende est. Carthage must be destroyed. That was how I began a presentation at the Cato Institute one week before the pope arrived in Washington, D.C. I suggested that if we removed the word "Carthage" and replaced it with "free-market ideology," we could imagine Pope Francis saying this most famous of Cato's lines.

For those unfamiliar with the world of Washington think tanks, the Cato Institute is the belly of the beast of libertarianism. It was founded in 1974 as the Charles Koch Foundation. Yes, one of the two Koch brothers, and they are not only the founders but the major funders of the organization. They must be paying a pretty penny because its downtown office is spiffy in the extreme and its hospitality was expansive.

I was there to speak about Francis' view on capitalism. Joining me on the panel were John Garvey, president of The Catholic University of America, and Jay Richards, who teaches at Catholic University's business school. We were welcomed and introduced by Cato's Marian Tupy, who also moderated the Q&A.

Garvey's presentation was strong, showing how Francis' comments stand squarely within the tradition of Catholic social thought, opening with quotes from previous popes that evidenced the church's ambivalence about so-called free markets.

He strongly defended the pope's approach to environmental issues in "Laudato Si', on Care for Our Common Home" and explained how that document shows the relationship of theology to science, and what that might mean for the dialogue on economics that we were called to discuss.

I went next. I also pointed out that the pope's comments on the economy were very traditional, using different quotes from those Garvey had used. I always like to call attention to Pope Pius XI's encyclical Quadragesimo Anno, where he wrote: "Just as the unity of human society cannot be founded on an opposition of classes, so also the right ordering of economic life cannot be left to free competition of forces. For from this source, as from a poisoned spring, have originated and spread all the errors of individualistic economic thinking." Take that, Koch Brothers!

I made the case that the pope's critique is systemic, not a matter of individual capitalists simply behaving with greater virtue. The system itself encourages unjust behaviors and relegates solidarity to the sidelines.

I examined the ethical and anthropological difficulties with libertarian economic theory, including a quote from ethical theorist Dorothy Parker, who wrote: "If you want to know what God thinks of money, just look at the people he gave it to." Mind bubbles of Donald Trump hopefully filled the room.

Friedrich Hayek, a free-market champion, said that we should gain "from not treating one another as neighbors." Jesus said we should love our neighbor as ourselves. They believe that mutual selfishness will provide material wealth. We believe, to quote David Schindler, that "a selfishness become mutual is not yet mutual generosity."

Most especially, we believe that the human person is created in the image and likeness of God, a God who is Trinity, that is, a communion of persons, not an autonomous self. So if one constructs an economic model on a mistaken anthropology, you end up with something that runs counter to our most basic Christian beliefs, not only about human persons, but about God himself.

Richards was the last panelist. He told us his Twitter handle is "FreemarketJay" and he certainly lived up to that moniker. It is stunning to me that the free marketers trot out data about the reduction in poverty rates in recent years and claim full credit for that happy outcome, but never want to shoulder the blame for those who are excluded from the economic rising tide. Even worse, they seem to think that free-market ideology is the only reason that poverty has been on the decrease.

At one point, Richards spoke about the "benign inequality" that existed between those of us in the room and Bill Gates. Gates seems to be a very good man, but that benign inequality could become malignant in a second if he weren't, and he would be just as powerful a force for ill as he is now for good. Should such power really be left to one individual's temperament and mood?

While Richards acknowledged the moral challenge posed by the inequality that separates the wealthy from the desperately poor in the developing world, there was a more proximate analogy. A few miles from Cato's headquarters are some very poor and hopeless neighborhoods. Those neighborhoods are closer than Gates' Seattle mansion, too.

The Q&A got a little heated. I said that I was tired of people like Richards saying the pope is really criticizing "crony capitalism" because that is what he knows from Argentina. First of all, if he wanted to condemn only cronyism, he could. He does condemn it on occasion. But his criticism of modern capitalism is obviously, and repeatedly, deeper and wider than that.

I also think there is something condescending about this line of reasoning. They do not come out and say, "Ah, the poor benighted Argentine, he only knows Peronism." But I don't recall anyone saying, "Ah, poor Pope Benedict XVI, he grew up in a snow-globe Bavarian village."

Benedict did, and Francis does, speak as the universal pastor of the church. Yes, all of us are shaped by our experiences, but I smell a rat when people try to use another's experience to avoid confronting their argument.

The church's social teaching needs to be lifted up again and again and nowhere more than in the U.S. It flows directly from the Gospel, so arguments about the various levels of teaching authority are moot. There are no texts more authoritative than the Gospels.

Column | Talking Francis and capitalism in the belly of the beast