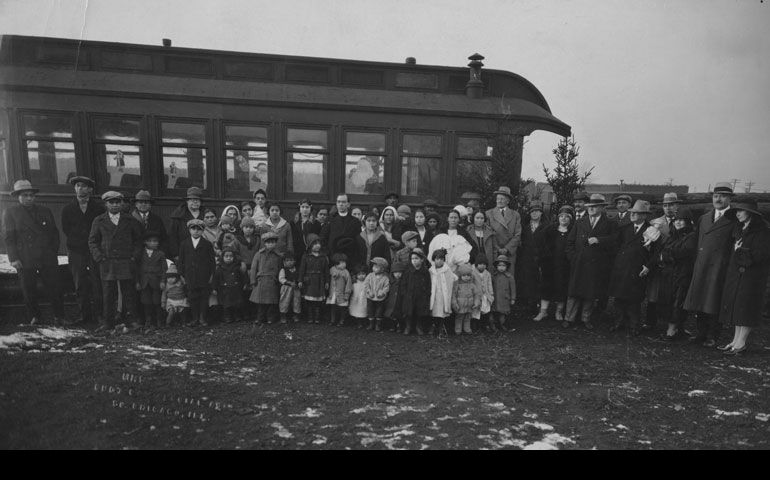 Catholic schools face many challenges. In recent decades, the steady supply of free labor from religious men and women has dried up. Demographic changes resulted in most inner-city Catholic schools serving poor, non-Catholic populations. Stagnant wages put the cost of a Catholic school education out of reach for most middle-class Catholic families. And the rising cost of education at all levels, from kindergarten through college, has affected profoundly the crowning glory of U.S. Catholicism, our vibrant educational system.

For all those problems, there are many interesting developments in Catholic education, one of which was the focus of a conference titled "Catholic Archives in the Digital Age: A Conference for Archivists and Teachers" held Oct. 8-9 at The Catholic University of America in Washington. The event brought together Catholic educators with Catholic archivists to explore ways that archival material, especially digitized material, can be used in classrooms.

We all find reasons to bemoan canon law, but one of its benefits is that it requires a lot of record-keeping, and those records, deposited in Catholic archives, are a treasure trove of information for teaching young people.

"They published bulletins, describing their work," McCarthy explained, "and those bulletins relate what was happening at the local level far more than the newspapers of the time, which paid attention to the important people."

The Claretians undertook a great deal of work with specific ethnic communities throughout the 20th century, McCarthy explained. They were especially active with Mexicans fleeing religious persecution during the Mexican Revolution and after the Cristero Revolt, including some who came all the way north to Chicago.

The documents in the order's bulletins, as well as photographs, show how the order helped the Mexican community preserve its ethnic identity, even while facilitating assimilation into the ambient Anglo culture. The Claretians sponsored entertainers to come from Mexico to preserve the musical tradition and they held parish fairs that featured Mexican foods.

"The Irish middle class supported the building campaign," McCarthy said, and noted that Catholics from Europe who had come earlier were generous with the newcomers from Mexico and elsewhere. Running through much of the literature from the 1920s onward is a strong social justice tradition.

Sitting in the audience, I thought to myself: Why is this history of solidarity so little known? It is not only important for teaching church history, but for the history of social movements, ethnic history, political history.

Sr. Denise Gallo is the provincial archivist for the Daughters of Charity in Emmitsburg, Md., which has a great deal of material related to St. Elizabeth Ann Seton, who founded the order. Gallo credited Bishop Simon Bruté, who was close to Seton, for telling the order to "save everything," perhaps knowing that one day her possessions would be valuable for both historical and devotional reasons.

A drawing of Seton by Bruté served as the inspiration for the canonization banner used at St. Peter's Square in Rome when Seton became the first American-born saint in 1975. The drawing and the banner are both now in the Daughters of Charity archives.

The archives also have extensive material on the sisters' work during the Civil War and Spanish-American War.

Gallo shared an interesting contemporary anecdote with the conference attendees. This past summer, she got a call from the State Department. They were on the hunt for an artifact associated with Seton that President Barack Obama could present as a gift to Pope Francis when he visited the White House in September.

Gallo had just the thing: one of two original keys to the 1809 Stone House where Seton lived with her first fellow sisters.

Amy Cooper Cary led the conference through the website of the Marquette University archives. They have a lot of materials relating to social justice concerns, Native American peoples, mission schools, and business and labor relations. But the crown jewel of the Marquette holdings are the papers of Dorothy Day and the Catholic Worker movement.

Carol Coburn from Avila University started by giving a shout out to Global Sisters Report! Her work focuses on Catholic sisters and she has written for GSR. She said that while doing research for the book Spirited Lives: How Nuns Shaped Catholic Culture and American Life, 1836-1920, "we realized things were disappearing."

Coburn said to her colleague St. Joseph Sr. Martha Smith, "Start collecting everything!" And they did.

Coburn noted that Catholic sisters "built the society we have: in education, in health care, in social work. All three have a specific gendered aspect" because of the work of women religious, she said.

The second panel consisted of educators who discussed how they use archival material in the classroom now, and the kinds of things they would be looking to use in the future. Paul Boman, who teaches a sophomore history of theology course at Stone Ridge School of the Sacred Heart in Bethesda, Md., said that he turned to online primary sources in his classroom not only because he prefers primary sources "but because it was hard to find the perfect textbook."

He admitted that searching for primary sources online is "a bit of a hunt," and that translated materials are sometimes archaic and some websites are not updated. For his senior-level class in Catholic social teaching, Boman said he relies heavily on Marquette's Dorothy Day papers and also a website built by the St. Paul-Minneapolis archdiocese, now housed at the website for Catholic Charities of St. Paul and Minneapolis.

Patrick Kelleher, who teaches high school at Georgetown Visitation Preparatory School in Washington, described recent times when he was asked a question, ventured an answer, and within seconds, one of the students had verified his answer online.

Kelleher cited several websites he uses frequently, such as www.digitalhistory.uh.edu, run by the University of Houston, and www.historymatters.gmu.edu, hosted by George Mason University.

Other panelists described how they verify which websites are good, and teach the students to do the same, noting that there is a lot of bunk on the Web.

In the Q&A, archivists and educators got into a great discussion about how archivists can make their holdings more user-friendly for classroom teachers. Subsequent panels discussed current collaborations and how archivists can pursue cost-effective digitization efforts.

The conference was sponsored by Catholic University's Archives, its School of Library and Information Science, and the Institute for Policy Research & Catholic Studies, where I am a visiting fellow. The event was largely organized by Maria Mazzenga, interim director of the institute and was made possible by a grant from the Our Sunday Visitor Institute.

'Slacktivism' makes the world a better place from the couch