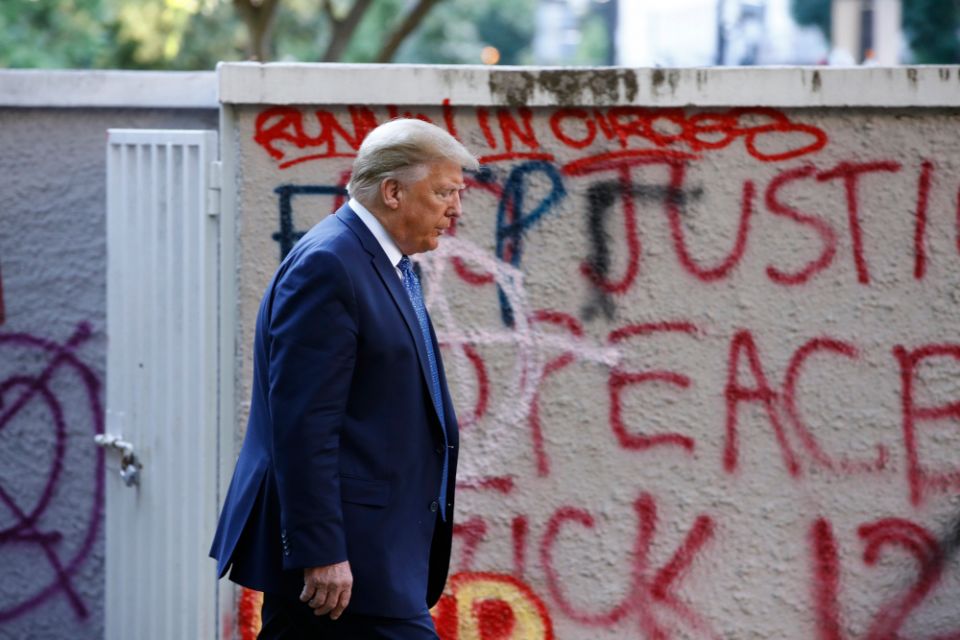 Washington — Informal evangelical Christian advisers to President Donald Trump have long championed religious freedom as a key issue that should be embraced by the administration, often arguing passionately against government infringement on religious activities.

That's why some have framed the president's recent (June 1) photo-op in front of St. John's Episcopal Church, in which he held aloft a Bible for cameras, as an expression of support for religious freedom.

"[Trump] walked FOR the protection of the right of peaceful protest," Johnnie Moore, who helped organize the Trump campaign's evangelical advisory board in 2016 and now serves as a commissioner for the United States Commission on International Religious Freedom, said in an email to Religion News Service. "He walked AGAINST the violent anarchists and looters who were disrupting those peaceful protests and dishonoring the memory of George Floyd."

Other evangelical supporters of the president such as Franklin Graham and Texas pastor Robert Jeffress have also praised Trump's walk to St. John's, calling it an " important statement " and " absolutely correct."

Moore and others have less to say about what happened before the president's visit to the church — when police working with the federal government forced hundreds of demonstrators away from Lafayette Square and expelled clergy from church property.

An Episcopal priest and a seminarian say they were passing out water to demonstrators from the grounds of St. John's as part of an effort organized by the Episcopal Diocese of Washington when they were forced off church grounds as law enforcement broke up the protest. They said police used shields and pepper-based irritants — which the CDC says are also referred to as tear gas — that left them coughing and tending to swollen, red, tear-stained eyes.

RNS reached out to several evangelical leaders who are known to advise the president informally to ask about the treatment of clergy by law enforcement. Most did not reply, and only one — the Rev. Tony Suarez, who serves as a vice president at the National Hispanic Christian Leadership Conference — offered a conditional rebuke of police actions.

"If the members of the clergy were there by the request of the church or by the invitation of the parish or archdiocese, and they were there in that type of capacity, no, they should not have been removed," Suarez told RNS on June 5.

He later added: "It's extremely unfortunate what happened to them."

Suarez's remarks echoed those of NHCLC President Samuel Rodriguez, who told The Washington Post that the president held the holy text "like a boss" but also expressed concerned about protesters.

"I hope peaceful protesters were not moved away with tear-gassing," Rodriguez said.

Trump administration officials have offered conflicting accounts as to why Lafayette Square was cleared. Initial reports from the White House alleged the expulsion was to enforce a 7 p.m. curfew in Washington, but Barr later claimed that the operation was part of an existing plan to expand the security perimeter around the White House and alleged that there were violent protesters. The attorney general also insisted that there was " no correlation " between Trump's visit to the church and the decision to clear the park and defiantly claimed officials did not use tear gas.

White House press secretary Kayleigh McEnany told reporters on June 8 that there are "No regrets on the part of this White House" regarding the clearing of protesters from Lafayette Square.

"We stand by those actions," she said.

The demonstrators in the park — who included at least one Methodist minister — have been described as acting peacefully during the confrontation with police, although an investigation from The Washington Post uncovered a few incidents of protesters hurling water bottles and eggs at police. The same investigation also noted that canisters labeled as "CS" gas — which are almost universally described as tear gas — were found at the scene by journalists, and footage from the day shows metals cans emitting yellow-green smoke. 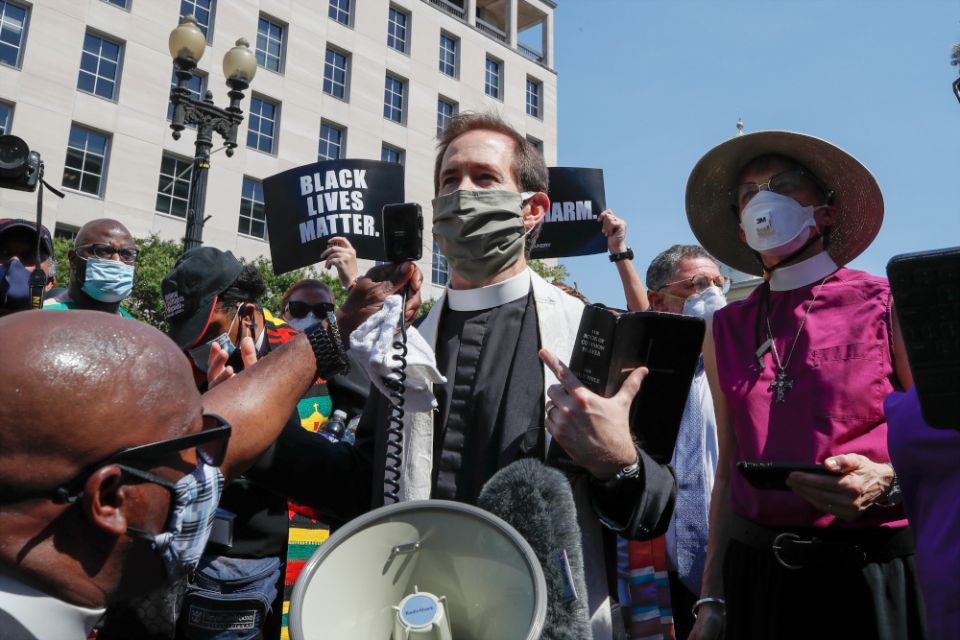 Rev. Robert Fisher, rector of St. John's Church, speaks, Wednesday, June 3, 2020, down the block from the church that is across Lafayette Park from the White House in Washington. (AP/Alex Brandon)

Even if the park was cleared to make way for Trump, Suarez said that is not uncommon.

"If it had been the (anti-abortion rally) March for Life, if it had been immigration reform … if the president was coming through, they would have cleared the area," he said. "Do they have to use tear gas, if that's what they used? I don't know, but these are extreme circumstances."

Ralph Reed, the founder of the Faith and Freedom Coalition who describes himself as a friend of Trump, dismissed the idea that expelling clergy from church property is a religious freedom issue.

"Under normal circumstances, I do not favor law enforcement asking clergy to leave a house of worship," he said in an email. "In this case an historic church had been targeted by rioters for arson and destruction the previous night, and the DC Metropolitan Police were clearing a security perimeter in an area where there had been ongoing violence. There is nothing unusual about individuals being asked to leave a secure area."

The Rev. Gini Gerbasi, a priest who was on the church patio during the time of the expulsion, said she did not hear a request to leave St. John's. Rather, she said, law enforcement advanced suddenly using shields and gas to expel her and others, and in so doing "literally push(ed) on to the patio of St. John's Lafayette Square."

Reed said that the incident did "not appear to have been directed at anyone's religious beliefs." However, he suggested that any clergy who had complaints about the behavior of law enforcement should contact Washington's mayor or leaders in the Police Department.

Moore said he believes faith leaders were not targeted but instead "were caught in the middle of an attempt to move the protestors back."

He did suggest that the fire that had damaged St. John's the night before was, in fact, a religious freedom issue.

Leaders of the Episcopal Church have been critical of Trump's photo-op in front of a church affiliated with their religious tradition.

"The symbolism of him holding a Bible … as a prop and standing in front of our church as a backdrop when everything that he has said is antithetical to the teachings of our traditions and what we stand for as a church — I was horrified," the Rt. Rev. Mariann Budde, the Episcopal bishop of Washington, told RNS last week.

Reed had strong words for Budde and other Episcopal leaders who have condemned Trump's visit to St. John's.

"Some of President Trump's critics seem more upset about him holding a Bible at a church than they were about the vandals who nearly burned it to the ground," he said. "The vast majority of Christians are grateful that the President made clear that we need more faith in America, not less, and we cannot allow the destruction of churches or other houses of worship."

Reed did not provide evidence to support the claim "the vast majority of Christians" supported Trump's visit to the church. However, a recent Public Religion Research Institute poll shows the president's support eroding with different Christian groups: since March, his favorability among white evangelicals has dropped as many as 15 points and among white Catholics by 23 points.

Moore expressed similar frustration with religious liberals, many of whom have been critical of Trump's presidency since he assumed office.

"I've become convinced that if Jesus Christ himself stood beside Donald Trump outside of a church then they would find something to criticize; they just can't help themselves," he said. "I wish they would instead accept the hand that has been extended to them, again and again, to work together with conservatives to address — right, left and center — the challenges we all face, together."

When asked whether the Trump administration has "no regrets" about the expulsion of clergy, White House representatives did not immediately respond.