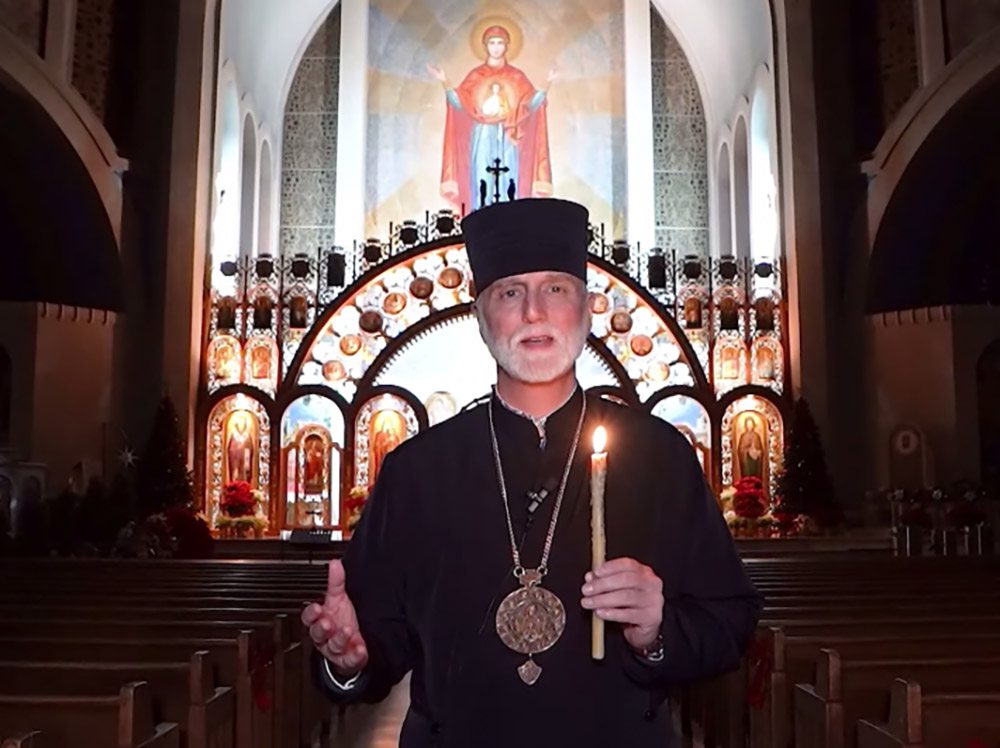 Metropolitan-Archbishop Borys Gudziak of the Ukrainian Catholic Archeparchy of Philadelphia joins a daylong worldwide prayer for peace Jan. 26. "Deceptive darkness envelops Ukraine," he said at the service at the Cathedral of the Immaculate Conception in Philadelphia. "But virtually, Ukraine is enveloped by the warmth of a prayer of the whole world today." (Courtesy of UGCC Department for Information)

In the days leading up to Russian's invasion of Ukraine, Metropolitan Archbishop Borys Gudziak of the Ukrainian Catholic Archeparchy of Philadelphia worked the phones in Paris.

As he ended a packed European trip that included two weeks in Ukraine as well as visits to Rome, London and Paris, Gudziak juggled calls with Catholic leaders, humanitarian groups and media. "What Ukrainians want is peace, freedom and dignity," he repeated.

If Russia takes control, he warned, the Ukrainian Catholic Church would again be designated illegal and be forced back underground. "For the last 100 years, that has always happened," he said during a Feb. 24 Zoom interview with NCR about seven hours before Russia launched its invasion of Ukraine. "We pray that peace can somehow be reinstated and the human, social and the international devastation and escalation of this war we're dreading will not occur."

As Ukraine's sovereignty and identity are again threatened by Russian aggression, Gudziak, 61, stands as a strong U.S. Ukrainian Catholic voice sharing the Eastern European nation's painful history and boosting its potential as a dynamic, democratic state. He fears Russian President Vladimir Putin will repeat the atrocities of Russia's 20th century totalitarianism and repression, including targeting Ukrainian Catholics and suppressing the church.

Related: 'We are afraid, but we are also strong': Stunned sisters worldwide watch as Russia invades Ukraine

Born in Syracuse, New York, to Ukrainian immigrants, Gudziak was inspired by Ukrainian Cardinal Josyf Slipyj, who visited Syracuse in 1968. Slipyj spent 18 years in Soviet prison camps before the Vatican arranged his release in 1963. The Soviets had ordered Ukrainian Catholics to renounce the pope and join the Russian Orthodox Church. Slipyj refused, becoming a hero to Ukrainian Catholics worldwide and a symbol of Joseph Stalin's persecution of the Roman Catholic Church after World War II.

Gudziak led the Paris-based Ukrainian Catholic Eparchy of St. Volodymyr the Great, which includes France, Belgium, Netherlands, Luxembourg and Switzerland, 2013-19. He was installed as leader of the Philadelphia Archeparchy June 4, 2019.

He is chairman-elect of the U.S. bishops' Committee on Domestic Justice and Human Development and will begin the job in November. In December 2021, Pope Francis named him to a five-year term with the Vatican's Dicastery for Communication.

While visiting Ukraine recently, Gudziak tested positive for COVID-19. He said he had been vaccinated and his symptoms were mild. He was in Rome Feb. 16-18 for a meeting of the Vatican's Congregation for the Eastern Churches.

In interviews, lectures and articles, Gudziak recounts the history of the Ukraine and its underground church. He frequently posts on his Facebook page news stories and videos, many of which he records both in English and Ukrainian.

Despite independence from the former USSR in 1991, Ukraine continues to experience political and economic corruption and assaults on civil liberties. Since March 2014, when Russia annexed Crimea, more than 13,000 people have been killed and at least 1.4 million people displaced, according to a Congressional Research Service report that summarizes United Nations data.

But Ukrainians and the Ukrainian Catholic Church have begun healing and were recovering their dignity, Gudziak told NCR. "The church had the right to function publicly again and Ukrainian culture and Ukrainian democracy were taking baby steps forward," he said. "Presidents were voted in democratically. Freedom of the press flourished. Civil society had a big NGO sector. In a country where everything was controlled by the Communist regime, freedoms were developing."

Russian aggression threatens religious freedom, he said. "About 100 different denominations functioned on social issues," he said "This freedom, this democratic virus, is seen by Putin and the oligarchic group that controls Russia as something very dangerous — much worse than COVID."

Russian attacks on religion are nothing new. "During the nearly seven decades that have elapsed since the Bolsheviks seized power, the Communist Party of the Soviet Union has sought to eliminate religion or, failing that, utilize it for the purposes of the state," the U.S. Department of State wrote in 1987, four years before Ukrainian independence. "In this deliberate attack on religion, no institution has suffered more than the Ukrainian Catholic Church."

Putin's Feb. 21 speech "made explicit" his intentions, Gudziak said. "He basically said, 'Ukrainians are nothing, were nothing and will be nothing. You have no statehood. You are worthless, you're a failed country.' Ukraine is not a real country because from his view it's supposed to be part of the Russian empire, an imperial reconstruction of colonialism." 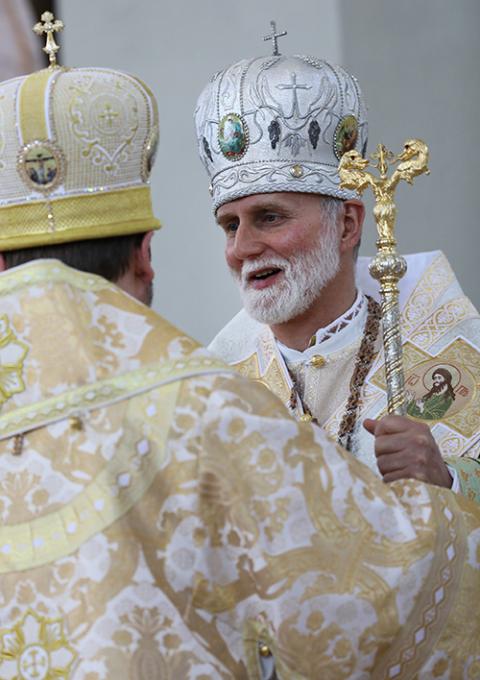 Gudziak knows what's at stake for the church. Ukrainian Catholic clergy, religious and laity would once again risk arrest, torture and imprisonment. Some would be killed. The faithful would secretly baptize their children, pray and attend Mass. Religious garb and religious articles would be forbidden. Seminaries and churches would operate in secret.

Threats like that put inconveniences and disagreements into perspective, he noted.

"Those who suffer in the faith help us to focus on essentials," he said. "When we have everything seemingly, that's when the enemy of humankind will find the means to divide. [Then] we find reasons to enter into conflict, and churches and families, the nation, society suffer from these great divisions today."

Ukrainians appeared calm in recent weeks, he said, because "they know life can be difficult. They're tough. They endure. They know if there's panic it plays into Putin's hand." Still, "many, many people, especially in the eastern part of the country, have for weeks now had a refugee suitcase ready."

Gudziak planned to return to the United States Feb. 26. But he acknowledged his heart lies with Ukraine and he'd like to accompany people through the crisis, as he did during the 2004 mass protest known as the Orange Revolution and the 2014 Revolution of Dignity.

He stressed that Russia and Ukraine have been at war since Russia's 2014 annexation of Crimea. "The international community is finally waking up," he said. "Many of us in Eastern Europe have been explaining these dangers for the past eight years, but people were making a lot of money. It's a systematic campaign to divide Europe and to try to split the North American alliance."

Despite their resolve, most Ukrainians know someone affected by the conflict in Crimea, and escalating aggression guarantees more suffering, Gudziak said.

"They're just beautiful young men sitting in these dugouts on the front in frigid temperatures thinking every night, 'Is this my last night?' " he said. "And their wives and children are thinking, 'Are we gonna lose our husband or father?' It's completely senseless. There's no reason for it."

Hours before Russia began airstrikes in Ukraine, Gudziak was worried yet hopeful. But he woke Feb. 24 to the bad news he had been dreading. Ukraine, he told CatholicPhilly.com, is "being crucified before the eyes of the world."