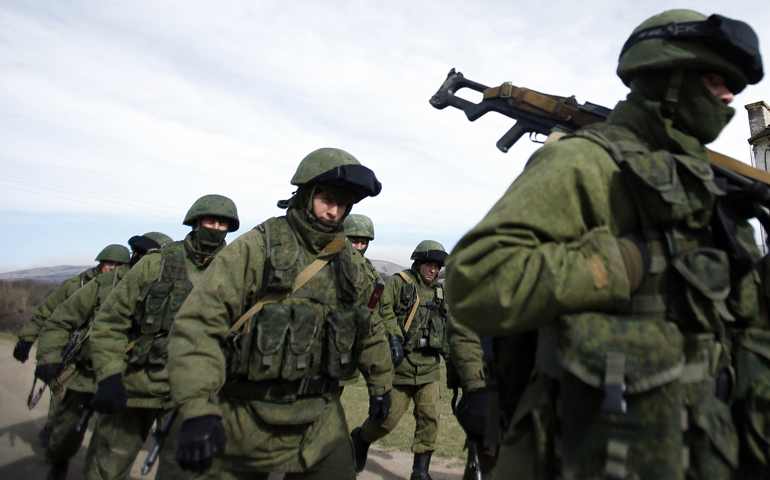 Armed men, believed to be Russian servicemen, march outside a Ukrainian military base in Crimea March 7. (CNS/Reuters/David Mdzinarishvil)

A Ukrainian Catholic priest in Crimea said church members are alarmed and frightened by the Russian military occupation and fear their communities might be outlawed again if Russian rule becomes permanent.

Fr. Mykhailo Milchakovskyi, a pastor in Kerch, Ukraine, described the atmosphere as tense because many residents of the town located in the eastern part of Crimea were unsure of their future.

"No one knows what will happen. Many people are trying to sell their homes and move to other parts of Ukraine," Milchakovskyi told Catholic News Service on Wednesday.

"Our church has no legal status in the Russian Federation, so it's uncertain which laws will be applied if Crimea is annexed. We fear our churches will be confiscated and our clergy arrested," the priest said amid tensions over a planned March 16 referendum on whether the autonomous territory should join Russia or remain in Ukraine.

However, he added that his church feared Russian rule would inflict a "new oppression" on Ukrainian Catholics, whose five communities traditionally make up about 10 percent of Crimean peninsula's 2 million inhabitants.

"Many have already stopped coming to church, after being branded nationalists and fascists by local provocateurs," Milchakovskyi said.

"The Orthodox have always insisted they're dominant here and done everything to make life unpleasant for us. If they're now given a free hand, we don't know whether they'll behave like Christians or follow the same unfriendly policy," he said.

Under Soviet rule, from 1946 to 1989, the Eastern-rite Ukrainian Catholic church was outlawed. The strongest members lived their faith clandestinely, while others attended an Orthodox church or no church at all. The government confiscated all church property, giving some buildings to the Orthodox and putting other buildings to secular uses.

In January, Shevchuk said Ukraine's now-ousted president, Viktor Yanukovych, had threatened to ban the Ukrainian Catholic church because of its support for pro-Western opposition protests. However, Leonid Novokhatko, Ukraine's former culture minister, denied that Yanukovych planned to ban the church.

Milchakovskyi said he had been allowed, as a military chaplain, to visit Catholics serving with the Ukrainian naval infantry in Kerch, after their base in the eastern port was blockaded by Russian-backed forces.

He reported that Russian troops were "controlling who and what gets through," and said young recruits now lacked food and medicines.

"Everyone says the results of the referendum are already known, although many would vote to remain in Ukraine, or to retain Crimea's autonomous status," the priest told CNS.

"The referendum will have no legal status, and we don't even know who'll conduct it and count the votes. But we're deeply anxious it will be used as a pretext to act against us," he added.

Two days earlier, in a separate CNS interview, Milchakovskyi said Catholics would likely not vote in the referendum.

"They say that it's not legal. They will not take part in it and that it is just illegal," he said using his wife, Alexandra, as an interpreter. Eastern clergy may be married prior to priestly ordination.

Ethnic Russians make up 58 percent of the Crimean population, with Ukrainians 24 percent and mostly Muslim Tartars about 12 percent.

As for the reported Russian encroachment in Crimea, Milchakovskyi said: "We have Internet. We have enough to eat and we can use the Internet and some Ukrainian (television) channels, but we just don't receive them and don't pay attention. Ukrainian occupiers change Ukrainian channels in to Russian."

News reports Wednesday said unarmed groups of volunteers, with support from local authorities, were attempting to protect churches, mosques and cemeteries from looting and vandalism.

Meanwhile, in a statement Tuesday, a bishop with Crimea's Orthodox Church associated with the Kiev Patriarchate, which backs the new Ukrainian government, said several prominent pro-Western activists had disappeared. The statement said there was a "real danger to the lives of Ukrainians" in the territory.

"Our priests are staying with their faithful whatever happens, but everyone is living in a state of war and siege and getting no humanitarian help," said the appeal, co-signed by Auxiliary Bishop Jacek Pyl of Odessa-Simferopol.

"Our parishioners aren't wealthy, and our clergy live in the same conditions, but we can't request money or material help because we've no way of receiving them," the priest said.

"We're counting on the prayers of Christians abroad and also their moral support in protesting and making our problems known as widely as possible."

[Mark Pattison in Washington contributed to this report.]