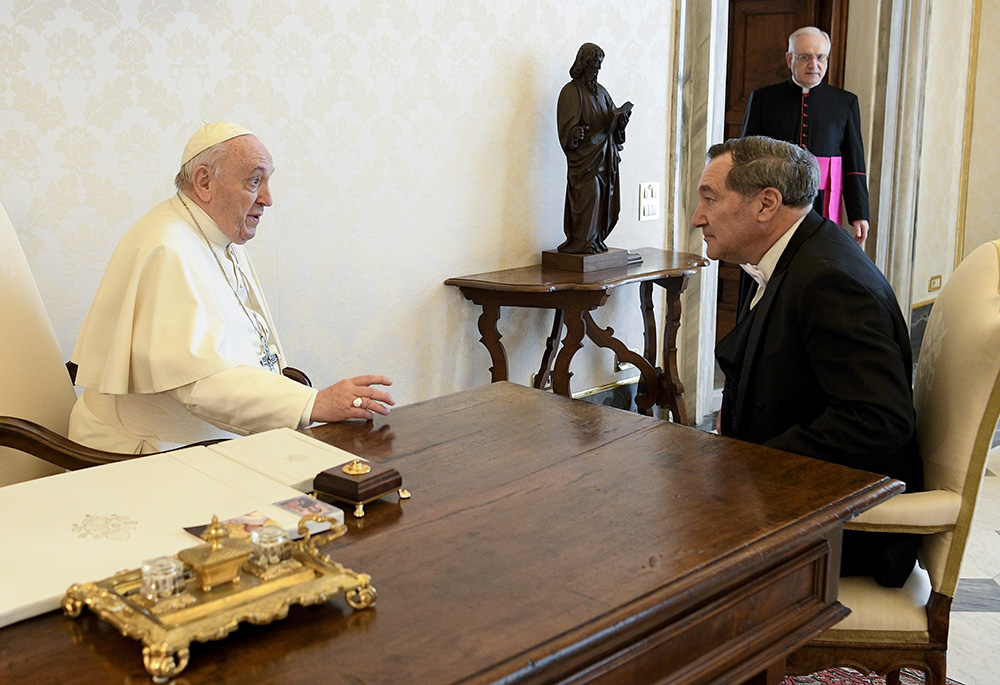 Pope Francis talks with Joe Donnelly, new U.S. ambassador to the Holy See, during a meeting for the ambassador to present his letters of credential, April 11 at the Vatican. (CNS/Vatican Media)

The first time new U.S. Ambassador to the Holy See Joseph Donnelly ever stepped foot inside of St. Peter's Basilica was just hours after he arrived in Rome on March 16, when he attended a prayer service for peace with diplomats from around the world, including Ukraine and Russia.

Laying eyes on Michelangelo's Pietà, he said the "agony on the Blessed Mother's face was so real," especially in light of the raging war. The war in Ukraine has quickly become President Joe Biden's most pressing international priority, and as Biden's representative to the Vatican, Donnelly believes the United States has a critical partner here in helping bring about peace.

"I know that the rest of the world, when they hope for one person to solve this problem, they look at the pope," Donnelly told NCR on May 16, in his first interview with a U.S. news agency since his arrival in Rome.

"The United States will do anything humanly possible to partner with the Vatican or anyone else to see a peaceful conclusion to Ukraine," he said. 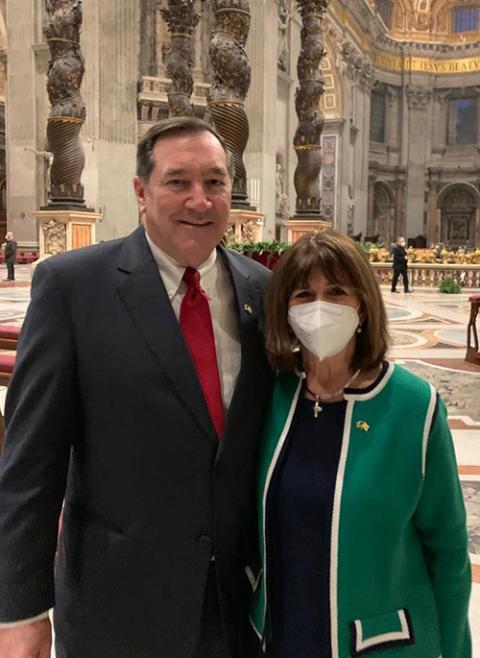 U.S. Ambassador to the Holy See Joseph Donnelly with his wife, Jill Donnelly, at St. Peter's Basilica in Rome (Courtesy of U.S. Embassy to the Holy See)

Since moving here two months ago to take up his new post — at 66 years old, this marks his first time ever in the Eternal City — Russia's war against Ukraine has dominated much of Donnelly's time, including his first conversation with Pope Francis when he formally presented his diplomatic credentials on April 11.

As a former member of Congress, Donnelly has a deep knowledge of Ukraine, having served on the U.S. Senate's Armed Services Committee and as the ranking Democratic member of its Strategic Forces Subcommittee. In that capacity, he visited Ukraine on a number of occasions, which he said provided him with a firsthand understanding of how much the country depends on the support of the U.S. to fend off Russian aggression.

"We have different roles" is how he describes the different approaches of the United States and that of the Holy See in helping secure peace.

"Folks have said, 'Oh my gosh, you work with the Vatican, they may be the only ones who can solve this,' " Donnelly recalled. "And that position is shared all around the world."

"What we try to do is be a good partner to the Vatican," he said.

One way of doing this, he continued, is by "answering any questions they might have, and telling them very clearly how we view this as a Russian invasion of a sovereign country and that Russia has committed genocide."

The United States has also sent Ukraine a steady supply of weapons, providing more than $3 billion in military aid.

After the outbreak of the war, Francis decried the rise of defense spending by Western nations to acquire more weapons. Yet in recent weeks, the Vatican's foreign minister has made clear that the Vatican believes Ukraine has a right to defend itself and that includes receiving weapons from other countries, as long as the response is "proportional." 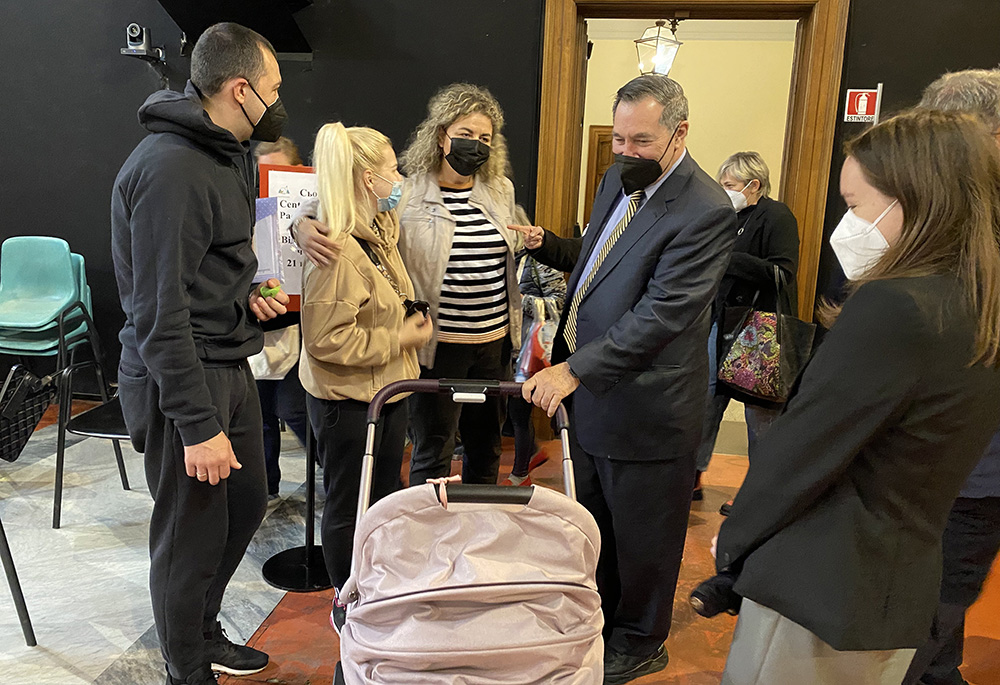 Joe Donnelly, U.S. ambassador to the Holy See, visits with Ukrainian refugees at the Community of Sant'Egidio's Refugee Welcome Center April 21 in Rome. (CNS/Courtesy of U.S. Embassy to the Holy See)

Donnelly said he welcomed that affirmation, and noted that "the truth about [Russian President] Vladimir Putin is the only way you can stop him is by stopping him."

"The only way you can stop him is to do that and the way Ukraine has been able to do that is through friends like the United States who had supplied them with the equipment necessary to protect themselves," he said.

"What you saw in Bucha would have happened in every single town in Ukraine if we were not there to help," he said, referring to the Ukrainian city where Russian forces slaughtered an estimated 1,000 civilians and abandoned their bodies in mass graves.

Donnelly also weighed in on Francis' May 3 interview with the Italian daily Corriere della Sera, where the pope wondered aloud if "the barking of NATO at the gates of Russia" could be Putin's justification for his aggression against Ukraine. That interview prompted some backlash from defenders of the transatlantic military alliance.

"It's very clear that this was not caused by NATO," said Donnelly. "This was caused by Vladimir Putin deciding to attack and invade Ukraine, and so, I think that the Vatican will look at those remarks."

Donnelly said the comments also have to be understood "in the overall arc of the statements of the pope" on the war. 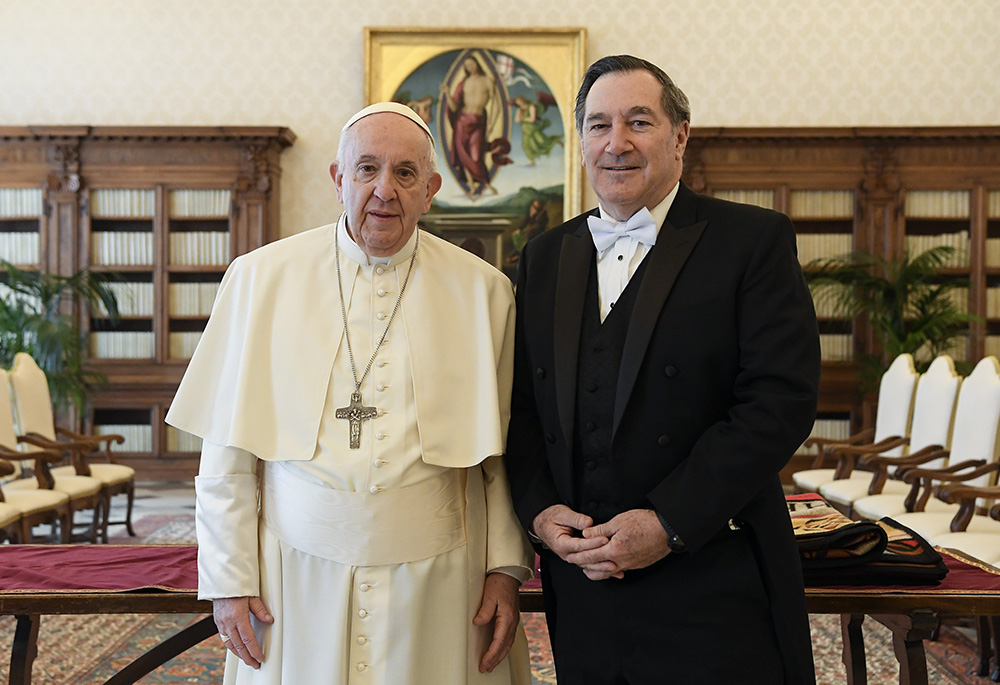 Pope Francis is pictured with Joe Donnelly, new U.S. ambassador to the Holy See, during a meeting for the ambassador to present his letters of credential, April 11 at the Vatican. (CNS/Vatican Media)

In that same Italian interview, the pope also said he had offered to visit Moscow to help bring about an end to the war, and that he felt it would be necessary to first visit Russia before considering a visit to the Ukrainian capital of Kyiv.

"Wherever the pope can go to try to reach peace, I think is important," Donnelly said, but added that "we [the United States] are very hopeful that he will go to Kyiv."

While the war in Ukraine has dominated Donnelly's initial weeks on the job, he said there are a number of issues he hopes to also help spotlight during his time here, including migration, health care and climate change. 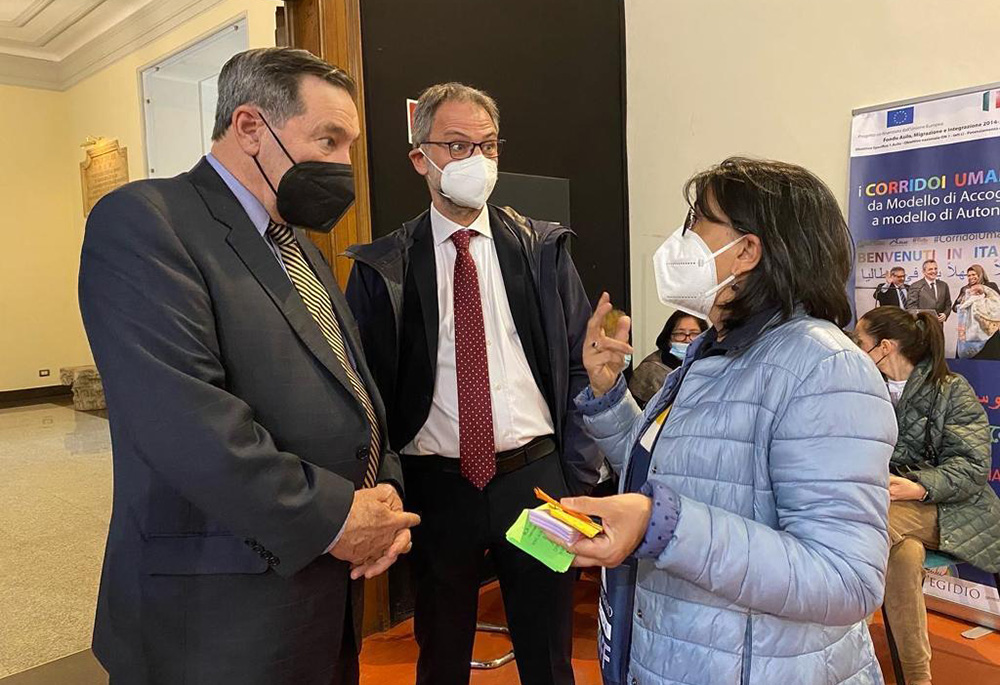 Joe Donnelly, left, U.S. ambassador to the Holy See, talks with a woman during a visit with Ukrainian refugees at the Community of Sant'Egidio's Refugee Welcome Center April 21 in Rome. (Courtesy of U.S. Embassy to the Holy See)

During his tenure in the House of Representatives, Donnelly — a pro-life Democrat — cast a critical vote in favor of the Affordable Care Act and later, once elected to the U.S. Senate, he successfully fought against its repeal.

In Rome, he sees this as a natural area of partnership between the U.S. and the Holy See, noting that approximately 25% of the world's health care is provided by the Catholic Church.

While Donnelly said he is aware that in the coming months there is likely to be continued tension between the Biden administration, the U.S. bishops and the Holy See when a landmark Supreme Court decision on abortion comes down — likely to overturn Roe v. Wade, the court's 1973 ruling that provided a constitutional right to abortion — he says it will not get in the way of the partnership between the two states.

"The Vatican and the United States agree on so many issues. Many more issues than we disagree," he said. "And as ambassador I’m focusing my efforts on those places of agreement and cooperation."

On another delicate matter, that of the Holy See's relationship with China, Donnelly says the U.S. continues to make it clear that it believes China is a serious human rights offender, particularly when it comes to religious freedom.

Those concerns were brought into sharp focus when Cardinal Joseph Zen, the 90-year-old former Catholic bishop of Hong Kong and an outspoken critic of Beijing's Communist rule, was arrested for his support of pro-democracy protests.

Donnelly characterized Zen's arrest as "outrageous" and said the U.S. had registered its concerns over it to the Holy See.

Despite the grim state of world affairs, Donnelly says he considers it a privilege to be in Rome where he considers both Francis and his fellow diplomats from the world as "teammates," eager to work together for the common good.

As a cradle Catholic and a parishioner of St. Anthony de Padua in South Bend, Indiana, Donnelly says it is still a bit heady that he is now representing the United States at the Holy See, but jokes that the time he spent serving on his local Catholic school board had its own challenges and proved to be a good training ground for navigating the complexities of Vatican diplomacy.

The new ambassador added, with a smirk: "It was equally challenging."

This story appears in the War in Ukraine feature series. View the full series.
A version of this story appeared in the June 10-23, 2022 print issue under the headline: Interview with US Vatican ambassador.