Welcome is mixed for gays on Catholic campuses 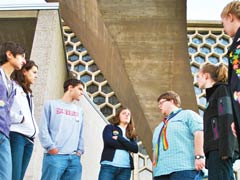 Elizabeth Gleich, center, meets with fellow Minnesota student activists following the Sept. 26 Mass in which they were denied Communion for wearing rainbow sashes as a sign of protest against the church's position on homosexuality. (Sophouen T. Chhin)

As warm September days gave way to a crisp October, most college students across the country heard something about the Sept. 22 suicide of Rutgers freshman Tyler Clementi. The 18-year-old jumped off the George Washington Bridge in New York when fellow freshmen streamed a video on the Internet of Clementi in a homosexual encounter.

Gay college students, including some at the nation’s 230 Catholic colleges, held candlelight vigils to remember Clementi and bear witness to the agony that gay young people often live with every day.

University of Notre Dame senior Brandon Buchanan said he couldn’t imagine how painful and humiliating it must have been to be “outed” as Clementi was. He came out on his own. “I honestly don’t think Notre Dame people think it [anti-gay bullying and suicide] could happen here,” he told the student newspaper, The Observer. “I would disagree.”

Clementi might have been thinking of an anti-gay cartoon that was published in the Observer last January. In the cartoon, a character posed the question, “What’s the best way to turn a fruit into a vegetable?” The answer: “A baseball bat.” A firestorm of protests followed -- on and off the Indiana campus. Although some at Notre Dame said that the cartoon slipped into the paper because the editor never saw it, many on campus were appalled. In the spring, the university hosted programs to air the issue, highlight gay rights and let gays tell their own stories.

Particularly on Catholic campuses, gay students live and pursue their education in the midst of an intensifying Catholic debate over homosexuality. Acceptance of traditional church teaching that homosexual inclinations are disordered, and that same-sex marriage violates natural law, is decreasing among Catholics overall. Support for gay marriage among Catholics has now grown to 45 percent, according to the Pew Research Center.

“Our current college students have just grown up in a culture where they have been exposed to gay people in their families, in their schools, in their church communities, in the media,” explained Marianne Duddy-Burke, executive director of DignityUSA. It’s easy to see, she says, why the Catholic college student population is even more accepting of the gay agenda than their parents.

DignityUSA is a member of Equally Blessed, a new coalition of four established Catholic organizations that have supported gay rights for many years. Duddy-Burke serves as a spokesperson for that coalition.

U.S. Catholic colleges offer top quality education and openly gay students are often willing to trade a less welcoming environment for the educational benefits and career payoff. New Ways Ministry, a Catholic gay advocacy group founded in 1977, publishes an online listing of “Gay-friendly Catholic Colleges and Universities.” A “gay-friendly” college, the Web site says, is one that offers “some type of lesbian/gay student group or support group.” Currently, there are 107 schools listed.

Although Notre Dame is on that list, Liam Dacey, who graduated from Notre Dame in 2004, agreed with Buchanan’s sentiments: Notre Dame is not that welcoming to gays. Unlike other Catholic schools, Notre Dame will not recognize or fund gay groups or clubs.

“We see a huge variety [in Catholic colleges],” reported Duddy-Burke, though she maintains that most Catholic college campuses do a good job with gay ministry even if it’s done “under the radar. You have places like the Georgetown model where they actually have a program and space for gays and lesbians. Then you have campuses like Marquette where a lesbian [Jodi O’Brien] was offered a deanship and was then rejected. What does that say to gay students on campus?”

In 2004, Georgetown University in Washington created an Office of LGBTQ (lesbian, gay, bisexual, transgender and questioning) Community Resources and hired a part-time coordinator. Officials at the Jesuit university were discussing the need to expand the outreach when anti-gay attacks on Georgetown students were reported in the fall of 2007.

DeGioia and Georgetown administrators make it clear that they are advocating for the students -- not a gay agenda. “As a Catholic and Jesuit university, a university administrator cannot advocate for policies or practices that are counter to Catholic teaching,” DeGioia told the Georgetown community.

At Notre Dame, Holy Cross Sr. Mary Lou Gude was assistant vice president for student affairs from 1998 to 2006. She now serves neighboring St. Mary’s College as vice president for mission. Though Notre Dame has not established a center for the gay community like Georgetown did, she thinks good progress was made.

“Sister M.L.,” as students, faculty and administrators called her, said she spent much of her time working to create a better campus response to gay students. The resulting Core Council for Gay, Lesbian, Bisexual & Questioning Students still acts today as the only official resource for gays at Notre Dame. It is overseen by the vice president for student affairs.

Dacey said he still feels frustration that Notre Dame undergrads do not have a recognized student club, let alone a center. He serves as chair of GALA-ND/SMC, an alumni organization of about 1000 gay and lesbian graduates of Notre Dame and nearby St. Mary’s College. Because the university will not fund a club, GALA-ND/SMC does. “We fund their social activities and have a scholarship for a current Notre Dame or St. Mary’s student to a GLBT leadership camp,” he said.

Dacey contends that there is a sort of “brick wall” erected around gays at Notre Dame. The president, Holy Cross Fr. John Jenkins, he reports, has not met with GALA-ND/SMC. “He sent me an e-mail and said that he will not meet with us,” Dacey said.

Because gay students who are out are often activists, clashes over gay issues are likely to play out on Catholic campuses.

On Sept. 26, Archbishop John C. Nienstadt of Minneapolis-St. Paul refused to give Communion to 25 gay activists from St. John’s University and the College of St. Benedict in Minnesota. They came to Mass wearing rainbow sashes to protest the church’s position on homosexuality. A spokesman for the archdiocese later explained that the archbishop had offered a blessing rather than the Eucharist because wearing rainbow sashes had constituted “a political statement, a sign of protest” and wasn’t an appropriate disposition for receiving the Eucharist.

Elizabeth Gleich, a junior and theology major at the College of St. Benedict and one of the rainbow sash protesters argued, “When we have no other way of dialoguing with our church, no other way of telling him [the bishop] how we feel, how else to do it than in liturgy?”

Some Catholic colleges are now presenting their gay ministries as outreach to minority populations.

This September, Anthony Garrison started work as the interim director at the newly opened Office for Lesbian, Gay, Bisexual and Transgendered Student Services at Loyola Marymount University in Los Angeles. Following the lead of Georgetown and Seattle Universities -- both Jesuit schools -- Loyola Marymount established an office devoted to answering gay, lesbian, bisexual and transgender needs. Previously, the needs of these students were addressed by the director of Intercultural Affairs, Garrison reported.

“What was happening was great,” Garrison said, “but the efforts needed to be expanded. This is just another population that we’re supporting.” The new center, Garrison said, includes a resource center, a lounge for students to hang out, and a technology center.

At Seattle University, outreach is a combined effort from Campus Ministry and the Office of Multicultural Affairs. Jesuit Fr. Michael Bayard is Seattle’s director of Campus Ministry and sees the pairing of these two university offices as ideal. Gay, lesbian, bisexual and transgender students constitute a minority that needs a particular ministry, and they have their own unique culture.

Ten years ago, according to Bayard, Seattle University began to offer weekend retreats for gay, lesbian, bisexual and transgender students each spring. The retreats, now called “Colors Retreats,” supported students exploring sexuality. The retreats helped them to look at faith, the social implications of being gay, safe sex, dealing with community responses, and making friends.

Not everyone endorses the higher profile outreach to gay students emerging on some Catholic campuses. In a late September opinion column in Loyola Marymount’s student newspaper, the Los Angeles Loyolan, one student expressed the hope that his university would not compromise Catholic teaching for gay outreach.

The university, Kenneth Valahos wrote, should post its mission statement as a Catholic university next to its new office, saying: “We love and support the LGBT student, but we do not support the sin of a homosexual lifestyle.”

But gay outreach, Seattle University’s Bayard argued, does echo essential Catholic teaching. At a Catholic institution like Seattle University, ministry to the gay and lesbian student population answers questions about what Catholicism means. “We feel we are called to be very inclusively Catholic,” concluded Bayard, “regardless of faith, gender orientation, and ethnicity. We should try to create a welcoming community for all.”

[Catherine Odell is a freelance writer and editor who lives in South Bend, Ind.]

Editor's Note: An earlier version of this story incorrectly identified Georgetown University's president, John J. DeGioia, as a Jesuit priest. DeGioia is not a priest or a member of the Society of Jesus. NCR apologizes for the error.

People | Welcome is mixed for gays on Catholic campuses

Dr. Paul Farmer, aka 'kenosis man,' emptied himself in love and service to others