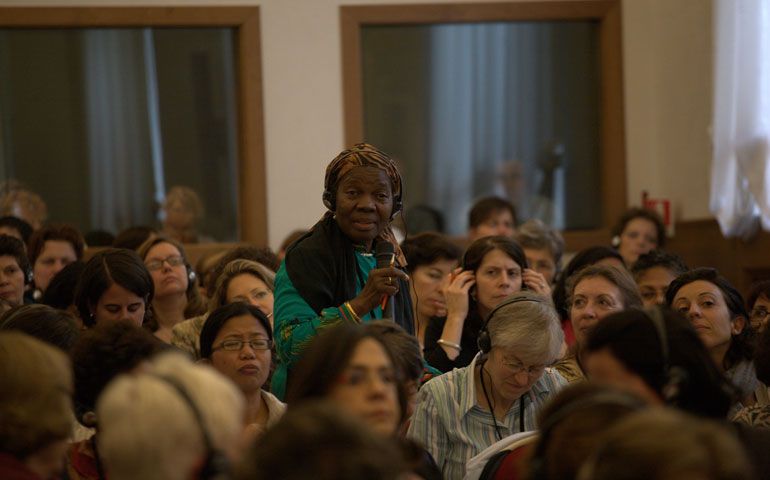 "I want to talk about a theology of men and women together," lawyer and theologian Helen Alvare told NCR in an email.

Alvare was a speaker at a recent Vatican symposium marking the 25th anniversary of Pope John Paul II's 1988 apostolic letter Mulieris Dignitatem ("On the Dignity and Vocation of Women"). The Women's Section of the Pontifical Council for the Laity hosted the symposium at the Vatican Oct. 10-12.

Around 100 women from 25 countries, representing lay movements and church associations, explored and discussed Mulieris Dignitatem. On the final day, Francis met with the participants and their families.

He added: "From here, we must restart that work of deepening and of promoting [women], for which I have already hoped many times. Even in the church, it is important to ask oneself: What presence does the woman have?"

In his interview with Jesuit magazines, published in English in America in September, Francis said, "It is necessary to broaden the opportunities for a stronger presence of women in the church" and "We have to work harder to develop a profound theology of the woman."

Francis told the pontifical council's seminar, "I suffer -- I speak truly -- when I see in the church or in some ecclesial organizations that the role of service -- which we all have and should have -- that woman's role of service slips into a role of servitude."

However, Francis also has said, "On the ordination of women, the church has spoken and said no. John Paul II, in a definitive formulation, said that door is closed."

John Paul's Mulieris Dignitatem is among the "formulations" cited as closing the door on women's ordination. In that letter, John Paul wrote, "In calling only men as his Apostles, Christ acted in a completely free and sovereign manner. In doing so, he exercised the same freedom with which, in all his behavior, he emphasized the dignity and the vocation of women, without conforming to the prevailing customs and to the traditions sanctioned by the legislation of the time." The letter also advocates a Christian complementarianism of genders, which was received critically in some church quarters at the time.

Francis' words, then, have left many women who serve the church in a diversity of roles wondering what he means.

"We keep talking about women as if they were just invented," said American Vicki Thorn, who attended the seminar. "You look at history, women have done darn near everything. Women in the church were educators, they ran hospitals, they gave the popes advice, etc."

Thorn is founder of the post-abortion ministry Project Rachel. She expressed resistance to a theology that includes only women, as did other women NCR spoke with.

"Personally, I am not sure why there needs to be a theology of women, and certainly not one written by men," Marti Jewell of the University of Dallas' School of Ministry said in an email to NCR. "There is not talk of a theology of men. We are all disciples by virtue of our baptism."

Francis praised Mulieris Dignitatem for its "profound, organic reflection, with a solid anthropological basis illuminated by revelation," and said the document was a point of departure for further study and efforts at "promotion" of women.

Alvare said, "Perhaps [Francis] is pointing to a subject that came up more than once at the Mulieris Dignitatem [seminar] -- the need to explore what women and men could do together outside the home in a complementary fashion."

Alvare said it is time to "transcend gender mistrust as a regular path, thinking about what more is produced, not only in the family, but everywhere, when men and women collaborate."

Ana Cristina Villa Betancourt, head of the Women's Section of the Pontifical Council for the Laity, said in an email to NCR that Francis had told the seminar that "Mulieris Dignitatem is a starting point."

She said that some theologians have not taken John Paul's letter seriously enough, and suggested, "Maybe we should all start by re-reading it without prejudices."

Motherhood is a key topic in Mulieris Dignitatem, and Francis reaffirmed this vocation when he spoke to the seminar participants.

"Many things can change and have changed in our cultural and social evolution," Francis said, according to Vatican Radio. "But the fact remains that it is the woman who conceives, carries in her womb and gives birth to the children of men."

Referring to this quote, Villa Betancourt said, "I think women who forget this, or try to put this fact aside as not very meaningful, end up not fully [supporting the cause of] women."

"When Pope Francis is stressing maternity as a key to understanding women's vocation, he is not thinking only of mothers that physically give birth," she explained. "He is thinking in a deeper expression of a woman's vocation ... that is present in consecrated women, religious women, single women, married women without children, every woman!"

Thorn agreed, saying, "Look at Mother Teresa -- she was a spiritual mother. Maybe I'm someone who gives my life to being a teacher, a nurse, a social worker."

Zeni Fox, professor of theology at Seton Hall University in South Orange, N.J., is cautious of defining women only by the role of mother.

"I think that motherhood does need to receive due praise," Fox said to NCR. "But I think it's only a portion of what we as women do and especially the fact there are many women who have never been married and have no children, it's only a part of womanhood." Fox is a member of the NCR board of directors.

Jewell said she hopes that Francis will not underestimate what women can offer the church beyond the traditional vocation roles.

"I would be careful not to overdo the equation of the gifts of women with either motherhood or virginity," Jewell wrote in an email to NCR.

Citing both gifts as beautiful states in life, she said she hopes "that the exploration goes further, however, in recognizing the intellectual, spiritual and pastoral gifts women bring as well."

Jewell said Francis has invited "both men and women to look at whatever biases they hold about the role of women in ministry and leadership, and find ways in which we can open up an invitation to the Spirit to animate the gifts of all the baptized."

Mulieris Dignitatem "is a theology that emphasizes a woman's role as wife and mother, but it seems to me when I read Francis' Oct. 12 remarks he really was opening the door to go beyond that," said Sheila Garcia, retired associate director of the Secretariat of Laity, Marriage, Family Life and Youth for the U.S. Conference of Catholic Bishops. "These roles are important, but we really need to look at women more holistically. Women have other gifts and talents they can contribute."

Villa Betancourt said she thinks that Francis is "serious about wanting to count on women and he is also very keen on the fact that this happens with women not being some imitation of men; rather, he understands it as a collaboration."

Alvare agreed: "My major impression from [Francis'] remarks is that he wants to see women in positions in the church really leading or really collaborating with men."

"I expect the church could not only take more advantage of women's growing know-how and expertise ... but also reap the benefits that come from gaining both a male and female's perspective … where there are now few or no women," Alvare said.

Garcia said she hopes that Francis will make "a commitment to really look at how women exercise decision-making authority in the church."

"You have to take interim steps to bring women into participation in the church, and you don't start off by getting ordination," she explained. "Personally, I think we need to look at what we can do now and not lose opportunities that are right in front of us."

Agreeing that significant changes are going to take time, Fox said, "We need to build slowly and not lose heart."

[Megan Fincher and Colleen Dunne are NCR Bertelsen interns. Contact them at mfincher@ncronline.org and cdunne@ncronline.org. Catholic News Service contributed material to this report.]

A flash poll of NCR readers and contributors turned up these books as suggested reading for someone -- like Pope Francis -- interested in women and theology. It is by no means comprehensive but is a good start for beginners.

Church in the Round: Feminist Interpretation of the Church, by Letty M. Russell (Westminster John Knox Press, 1993)

In Memory of Her: A Feminist Theological Reconstruction of Christian Origins by Elisabeth Schüssler Fiorenza (The Crossroad Publishing Company, 1983)

Sor Juana: Beauty and Justice in the Americas by Michelle A. Gonzalez (Orbis Books, 2003)

Standing in the Shoes My Mother Made: A Womanist Theology by Diana L. Hayes (Fortress Press, 2010)

Truly Our Sister: A Theology of Mary in the Communion of Saints by Elizabeth A. Johnson (Continuum, 2003)

A book that isn't explicitly about women, but offers a corrective to some of the church's outdated teaching on sexuality, which Francis will certainly have to reexamine if the Christian community is to move forward with a transformed understanding of women, is Just Love: A Framework for Christian Sexual Ethics by Margaret A. Farley (Continuum, 2006).