James Scott P. Pignatella has known he was male since he was 3 years old. Getting other Catholics to recognize him as such has been a struggle, he said.

People at church tried to keep him from taking "Patrick" as his confirmation name. He was barred from being an altar boy. And even now, he can't officially be a godfather to his best friend's children, who have called him "Uncle" since they learned to talk.

Because he is transgender, Pignatella said he's also had to deal with decades of painful statements from clergy and laypeople that he believes stem from many Catholics' lack of knowledge about trans people and their lives.

Pignatella is one of the speakers in a three-part series of Zoom sessions — which began Oct. 27 and will also be held Nov. 18 and Dec. 15 — to educate Catholic priests on how to better serve their trans parishioners. The sessions are hosted by Stan "JR" Zerkowski, director of LGBT ministry for the Diocese of Lexington, Kentucky, and executive director of Fortunate Families.

More than 30 priests are expected to attend, Zerkowski said in an email. 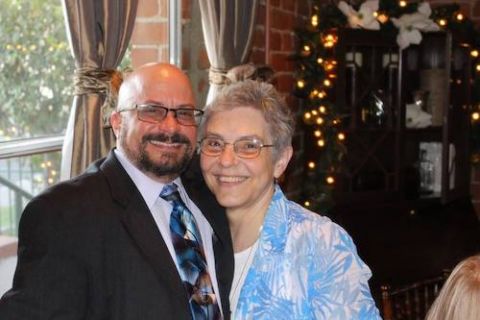 James Scott P. Pignatella, left, and Dominican Sr. Luisa Derouen are pictured in this 2014 photo. Pignatella and Derouen are both slated to speak at the Zoom sessions on ministry to trans people. Pignatella said he's participating in the Zoom series to share his story as a trans man and connect with priests so they can put a face to the challenges trans people encounter in the Catholic Church. Derouen is a longtime advocate for transgender Catholics. She said she hopes to help priests see trans people Catholics the way God sees them. (Provided photo)

"I'm really hoping that I'll … give them a face and a person to go with that identity," Pignatella told NCR. "I think that one of the bigger problems that exists is there's a lot of conversation about trans people, but not very many people know [anyone who is trans]."

Sr. Luisa Derouen, a member of the Dominican Sisters of Peace, is cisgender and has provided spiritual guidance for more than 300 trans people throughout her time in ministry (working in secret for years). She spoke Oct. 27 and is slated to speak at the second Zoom session. Deacon Ray Dever of the Diocese of St. Petersburg, Florida, is the speaker for the final panel.

Derouen's work with trans people and their families began when she met a trans woman, Courtney Sharp, at an LGBTQ support group meeting in New Orleans in 1999. That conversation, and the friendship that grew from it, motivated Derouen to accompany trans people on their spiritual journeys, mediate conversations with family members and talk to priests who had little experience interacting with trans parishioners.

She said she hopes to help debunk beliefs about trans people that Catholic leaders often spread — such as the idea that one's gender is fixed at birth or that transgender identity is an ideology or a mental illness.

Church leaders such as retired St. Louis Archbishop Robert Carlson have been rebuked by LGBTQ advocacy groups for using anti-trans rhetoric, which trans people and their allies say can be traumatizing.

Derouen said she wants to help priests understand how important their words are to trans Catholics.

Over half of transgender youth and young adults have considered suicide, according to a survey by the Trevor Project, an LGBTQ suicide prevention organization. Research suggests much of this is due to societal discrimination and family rejection. LGBTQ youth who had at least one accepting adult in their lives were 40% less likely to attempt suicide than those who did not, according to the survey.

Derouen said many trans people she met longed for affirmation from a person of faith.

Some wondered if they would go to hell for being trans (Derouen gave a resounding "no"), if God could still love them ("yes") and if they could live a faithful Catholic life as a trans person ("yes, of course you can").

"The truth never leads us away from God — that's my mantra," Derouen said. "So if you are living in the truth of who you are — and only you and God know that … That's what holiness looks like."

She said for many trans Catholics — and trans people more broadly — discerning their gender identity and transitioning can be a deeply spiritual experience. It's about asking the most fundamental question of all: "Who am I?"

"What I have witnessed over and over again, hundreds of times, is that when people claim their truth, as transgender, their relationship with God is much closer," Derouen said. "We can only go to God as we are."

Derouen said she believes most priests don't intend to harm trans people. She said she wants to be a resource for any priests — or other Catholics — who want to learn to support their trans community members.

Zerkowski told NCR in a phone interview that the Zoom sessions are geared toward priests to create a safe space for participants to ask questions and learn from speakers.

He said he's hoping to hold more sessions in the future for other groups — such as permanent deacons, bishops, members of religious orders and laypeople.

"All of them are entered into with the desired outcome of us being a more compassionate church, a more caring church, a church that responds to the needs of all God's children," Zerkowski said.

Looking back on her own ministry, Derouen said she recognizes a need for more outreach to trans people of color, who she said were underrepresented among the people she served. She also said she doesn't have much experience working with trans youth under the age of 30.

But she sees hope in groups like San Francisco University's Family Acceptance Project, which reaches out to and educates racially and religiously diverse families of LGBTQ youth to help them support their kids within their faith context.

Meanwhile, she said she hopes the sessions Zerkowski is organizing gain traction so that they reach Catholics throughout church leadership.

"[Trans kids] shouldn't have to deal with some of the stuff that I had to," he said. "We should continue to make it better for the next generation."