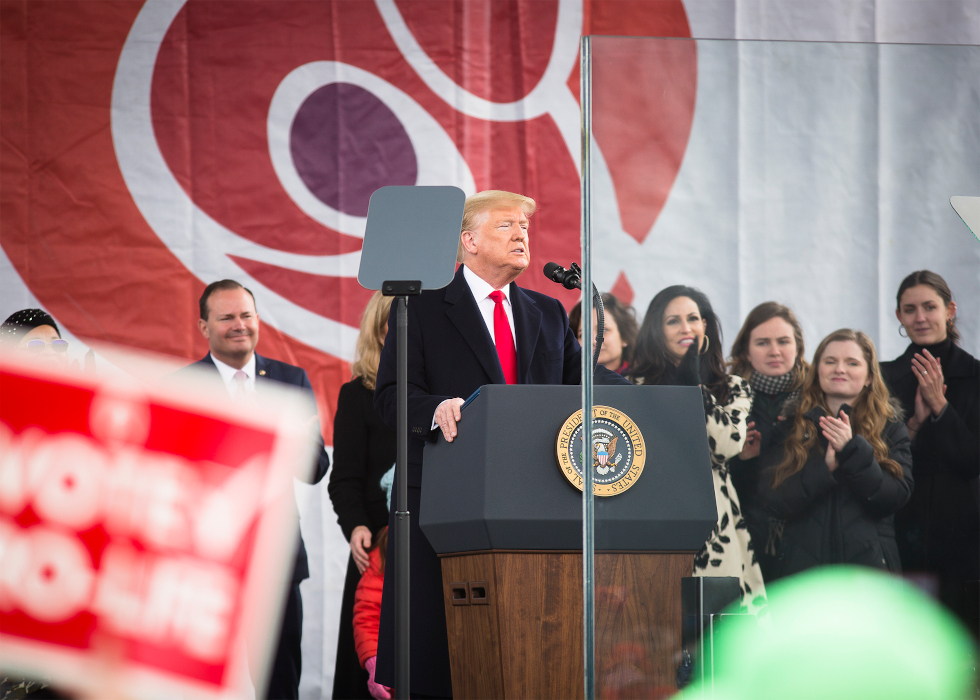 President Donald J. Trump speaks Jan. 24, 2020, during the annual March for Life rally in Washington. The latest Pew survey on religion and politics shows a big divide between white Christian and minority Christians, and non-Christian groups over their views of Trump. (CNS/Tyler Orsburn)

President Donald Trump may be as divisive to religionists as he seems to be to other groups in American society, as indicated by the latest Pew Research Center survey.

Gecewicz also cited a lengthening "bridge between white and Hispanic Catholics, especially with the questions about Donald Trump."

White Catholics increasingly believe their side has been winning politically. This Pew poll, taken Feb. 4-15, showed 55% believing that, more than double the 26% recorded in May 2016, and up from 41% from just last May.

In the survey, taken online, 68% of white Catholics thought "intelligent" describes Trump "very well" or "fairly well," along with 66% who said Trump "fights for what I believe in."

Hispanic Catholics look at Trump differently. Majorities said he was "prejudiced" and "self-centered," while minorities of 21-24% described him as "honest," "morally upstanding" and "even-tempered." Only 31% said Trump "fights for what I believe in," and just 30% agree with Trump on all, nearly all or many issues.

"These results largely reflect partisanship," Gecewicz said. "Most white Catholics said they identified with the Republican Party, and that's certainly in line with their partisan views and partisan identification."

Many of the questions, Gecewicz said, were new to the survey, and were asked in such a way that, if Pew researchers deem it necessary, can be asked again in a future election cycle or about a future president.

Yet 63% said Trump is either "not too" or "not at all" religious, while 35% said he was either "very" or "somewhat" religious. Conversely, 72% found Vice President Mike Pence very or somewhat religious, with just 18% saying the opposite. The only subgroups with majorities believing Trump to be religious were Republicans and white evangelicals.

At best, Trump elicits mixed feelings among people of faith in the way he conducts himself. No religious subset recorded a majority, or even a plurality, saying they like how he comports himself. Forty-nine percent of Catholics said they don't like how Trump conducts himself, led by 59% of Hispanic Catholics.

Majorities of those who found Christianity's influence declining cited growth in the number of Americans who are not religious, more permissive attitudes about sexuality and sexual behavior in popular culture, and "misconduct by Christian leaders." Fully 66% of Catholics saw misconduct as a reason for Christianity's waning influence — the largest percentage recorded by any religious group, or for any of seven possible reasons suggested.

According to Gecewicz, Pew has a pool of roughly 13,000 U.S. residents to participate in its ongoing "American Trends" series of surveys. From that group, 7,855 were selected to participate in this poll. Of the 7,855, 6,395 panelists did so, an 81% response rate. In that group, weighted to reflect their presence in the population, were 687 white Catholics and 421 Hispanic Catholics. The latter's presence in the U.S. population is larger than that of atheists and agnostics — of which just under 400 of each were surveyed — but less than black Protestants, of which 580 were polled.