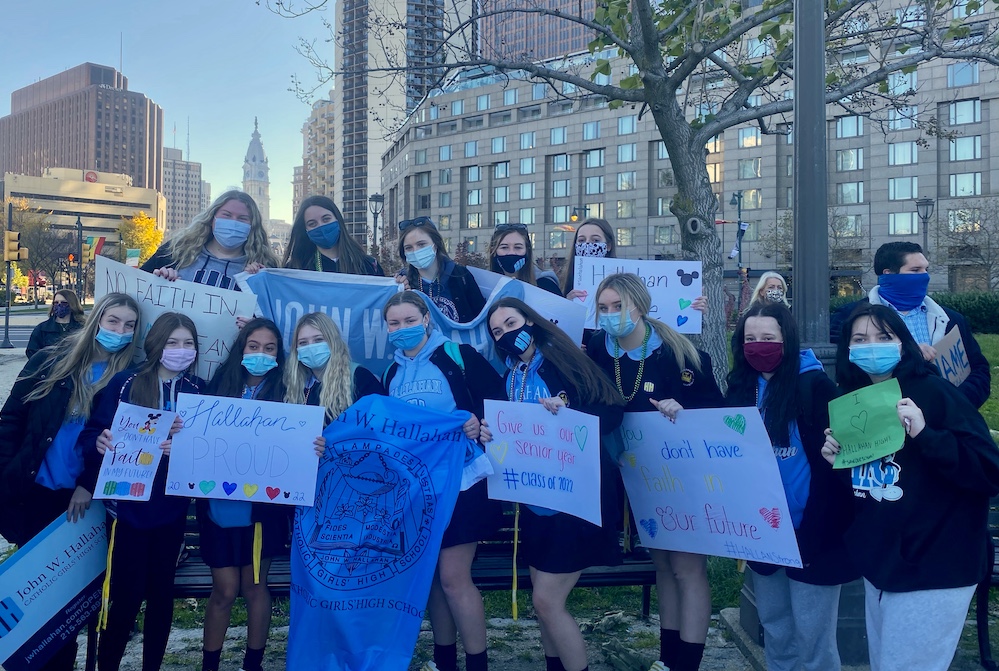 When Jill Kimrey, a junior at John W. Hallahan Catholic Girls' High School, learned on Nov. 18 that the Philadelphia archdiocese would be closing her school in June, she and her family were shocked. Jill loves Hallahan — she made this video to prove it — and she was looking forward to graduating with the class of 2022, joining more than 100 years of alumnae from the oldest Catholic diocesan all-girls high school in the United States, her own grandmother among them.

She made a pact with her friends that they would stay together for their senior year, she told NCR. She cried for hours after visiting another high school as a prospective student, her mother Kim said. Registration deadlines forced her to enroll at the other school last week, but she is still holding out hope that the archdiocese will agree to keep Hallahan open for at least another year.

Three months after the announcement of Hallahan's impending closure, the school's students, alumnae and parents are still pushing Archbishop Nelson Pérez to reverse the decision. A coalition of alumnae and parents started a group called Friends of Hallahan in early December to coordinate efforts to save the school. Their primary goal is to convince the archdiocese to operate Hallahan for at least two more years so that current sophomores and juniors can graduate, but they have also begun making plans to run the school independently if the archdiocese refuses.

Students have organized demonstrations near their Center City campus, staging a Nov. 20 school walkout, and protesting peacefully and praying in front of the Cathedral Basilica of Ss. Peter and Paul on Dec. 8 before marching to the Philadelphia Museum of Art to sing songs on the iconic "Rocky" steps and share memories, many carrying signs or wearing face masks featuring Mickey Mouse. (Mickey has been Hallahan's official mascot since 1930. Walt Disney himself gave written permission for this, alumna Jennifer Coffey said.)

Another "March to the Arch" (short for archdiocese) organized by Friends of Hallahan was scheduled for Friday, Feb. 19 but had to be postponed because of forecasted snowstorms.

"The intersection of ongoing enrollment declines and rising operational expenses is at the crux of this matter. These schools are the smallest in our system with student populations below 365," said the archdiocese's chief communications officer Ken Gavin in an email to NCR. "Without action, declining enrollment will cause tuition increases to accelerate at such a pace that both McDevitt and Hallahan would be unaffordable for families seeking a Catholic education."

Friends of Hallahan has asked that the sustainability report be released, said Coffey, a 1994 Hallahan graduate and one of the group's leaders, but Faith in the Future and the archdiocese have refused.

"The section of the report that pertains to Hallahan was shared with its board and local school leadership," Gavin explained in an email. "As the full report is a confidential work product studying all Archdiocesan high schools, it will not be released publicly." 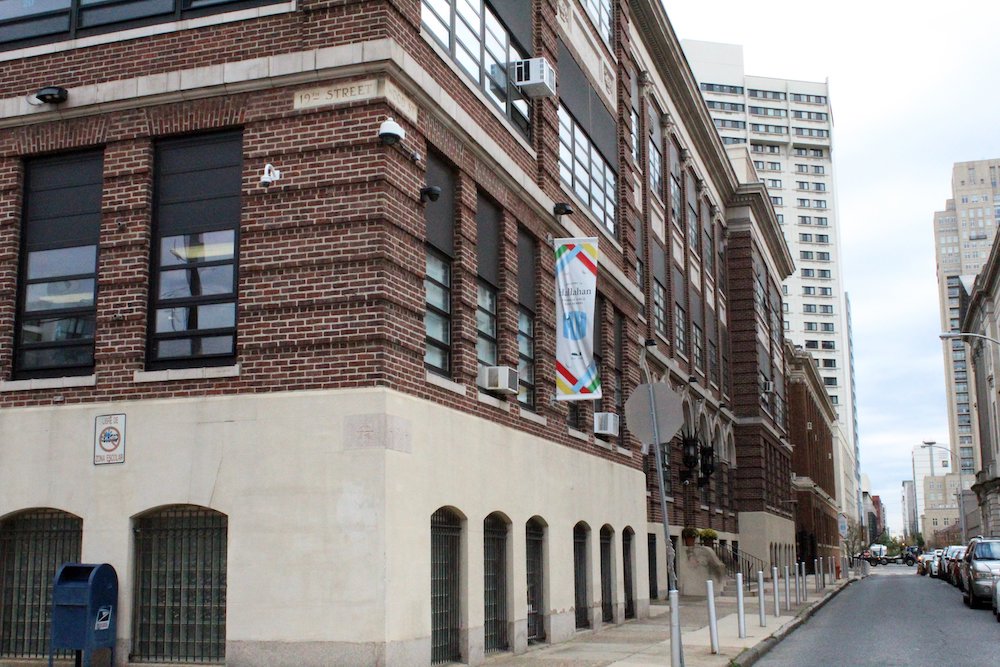 Archbishop Pérez, along with other leaders from the archdiocese and Faith in the Future, met with representatives from both Hallahan and McDevitt in December. At that point, McDevitt's board was still trying to raise money for a campaign to run the school independently, as the Philadelphia Inquirer reported, but they decided to give up their efforts last month.

"Despite the Board's development and proposal of very feasible plans to operate Bishop McDevitt as an independent Catholic high school, Archdiocesan personnel refused to discuss such a possibility," said a statement from the board posted on Facebook Jan. 8 by board member Teresa Redmond.

The same statement stressed that students were losing "a diverse, excellent high school which has always provided an outstanding Catholic education, especially for families of color and those who need financial assistance." Seventy percent of McDevitt's students are Black, the Inquirer said.

Hallahan's representatives were met with similar resistance at their December meeting with the archdiocese, said Suzanne Edinger, who leads Friends of Hallahan's Retention, Recruitment and Transition Team and manages the group's social media pages. "The group was not permitted to present in detail their plans. It was a formality for the Archbishop to save face with the Philadelphia City Council, who is behind the fight to save Hallahan," Edinger wrote in a Facebook message to NCR.

The city council did create a resolution in December calling on the archdiocese to keep both Hallahan and McDevitt open. Support for Hallahan from the city's private sector has been strong, too. The 25-story PECO building in Center City lit up on the night of the Dec. 8 vigil with a flashing message: "Save Hallahan High School." 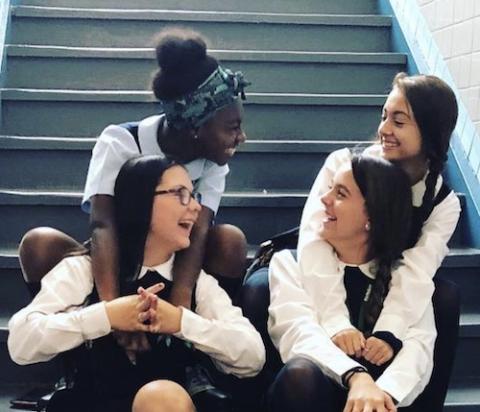 Hallahan students (clockwise from top left) Tajae Henricks, Ava Roberts, Jill Kimrey and Caitlin Siemien sit together on campus. Henricks, Roberts and Sieman will graduate at the end of this year. Kimrey is currently a junior, and will have to spend her senior year at another school if Hallahan closes in June. (Courtesy of Caitlin Siemien)

Friends of Hallahan has been asking for another meeting with the archdiocese to discuss hopes and plans to keep the school open, Coffey said, but the archdiocese has not granted the group a meeting and maintains that its decision to close Hallahan is final.

Members of the Hallahan community believe the decision to close the school has to do with the value of its real estate, said Coffey. The school's two buildings, owned by the archdiocese and located in Center City near the Barnes Foundation and the Franklin Institute, are worth over $37 million, according to 2021 estimates from the city of Philadelphia's Office of Property Assessment (available here and here).

"All the girls at Hallahan, we totally believe it's because of the money, but we don't understand because part of our faith is that it's not about the money, or greed," student Jill Kimrey said.

"They're picking on the school because it's the crown jewels," said Denise Baron, another Friends of Hallahan volunteer. Hallahan's real estate has significant value, Baron said, whereas the property at Little Flower, another Philadelphia diocesan girls' high school that serves about 500 students, has little value by comparison because of its location.

Friends of Hallahan has suggested a there could be a link between the archdiocese's need for money to pay reparations and its decision to close Hallahan. "It has also come to light that the real estate occupied by Hallahan is worth an estimated $37M, leaving reason to believe that the Archdiocese has intent to sell the property following large settlements to local abuse victims," the group wrote in a Jan. 14 press release shared with NCR.

"If the Archdiocese does in fact intend to sell the property, this may be in direct violation of the Will of the school's founder, Mary Hallahan McMichan," the press release said.

The archdiocese expects to pay a total of approximately $126 million in reparations to sexual abuse victims through its Independent Reconciliation and Reparations program, the Inquirer reported. Former Philadelphia Archbishop Charles Chaput pledged when he announced the program in 2018 that its funding would not be taken from "donations made to parishes, ministries, and schools," but acknowledged that funding would have to come from the sale of archdiocesan properties, writing in his column on CatholicPhilly.com: "Additional program funding will need to come from borrowing and the sale of archdiocesan properties. Which properties will be sold has not yet been determined." 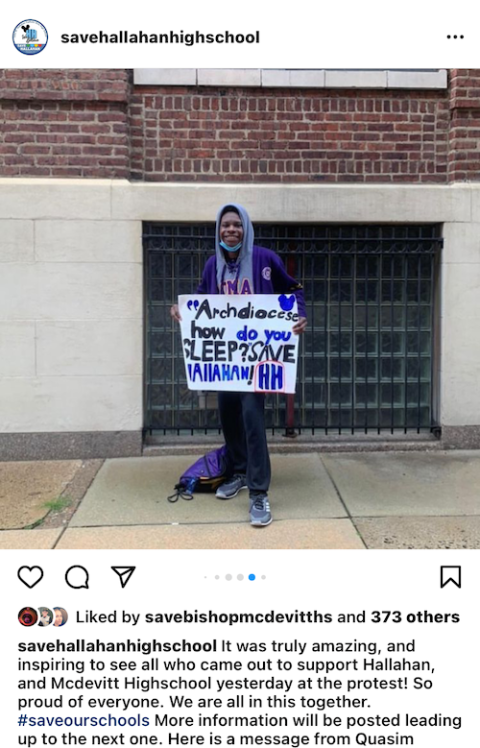 The archdiocese denies that the decision to close Hallahan had anything to do with the value of its property. "Real estate values were in no way a factor in the decision making process. To my knowledge, no appraisals have been obtained on the buildings," Gavin told NCR in an email.

Alumnae who are not as closely involved with Friends of Hallahan have been shocked to hear that the school will likely close, and have been reflecting on the school's culture and traditions.

Robyn Elliott, who graduated from Hallahan in 1990, told NCR the school was the first place she experienced diversity. She grew up in a predominantly African American neighborhood, and Hallahan introduced her to friends who were Asian, Italian, Irish and Puerto Rican. "That school was a family. It wasn't just a school, it was more than that," she said.

Ashli Talley, class of 2005, said she got her first two jobs through Hallahan, and that friends of hers stayed in the jobs they found through Hallahan for many years. She was shocked when she heard the school was closing, she told NCR. "The friendships and the values that I got from Hallahan, I carry with me everywhere," she said.

According to Michele Bolles, a 1985 graduate, the school has always prioritized helping its students to find work. Bolles herself got a job in a cardiologist's office through a nun at Hallahan at age 15, and she now works as a senior vice president with the American Heart Association.

Friends of Hallahan remains determined to convince the archdiocese to keep the school operating for at least two more years. To that end, they have started a #SaveHallahan social media campaign, applied to have Hallahan's buildings designated as historic sites, begun making plans to operate the school independently if necessary, and raised money to pay for research and lawyers to examine historic documents from the school's founding, Coffey said. A hearing with the Philadelphia Historical Commission is scheduled for March 3.

They have not launched a formal fundraising campaign yet, but the online donations they have collected so far will support their advocacy efforts to the archdiocese or help the school run independently. (Coffey declined to tell NCR how much they have raised.) 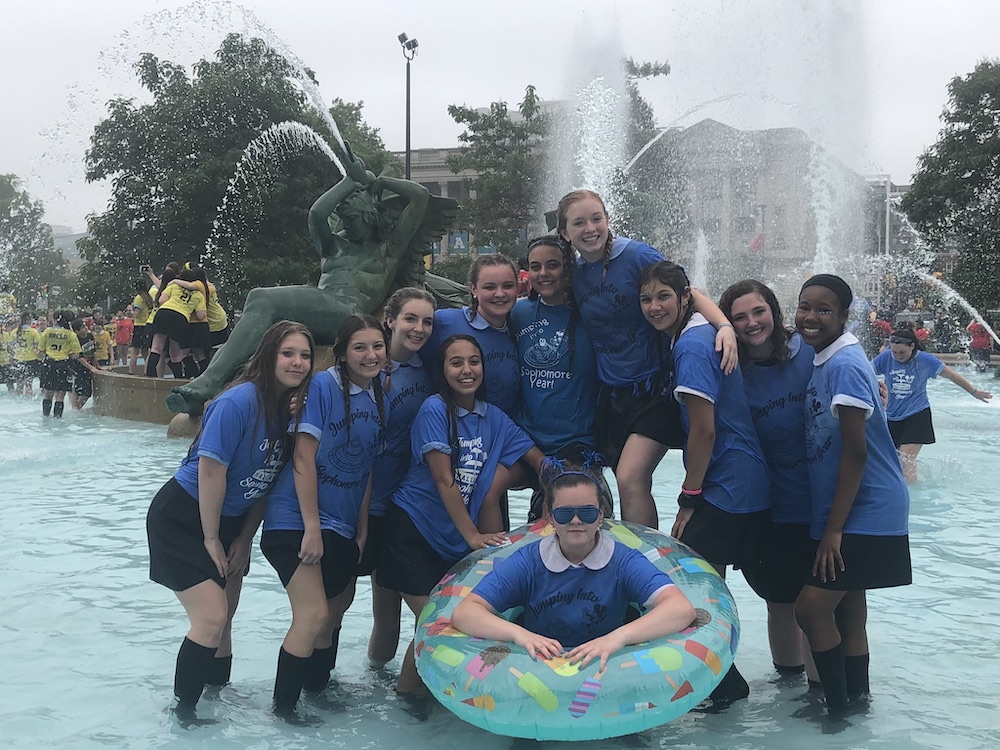 Hallahan students celebrate the end of the school year in spring 2019 by jumping into the Logan Square Fountain, a tradition that dates back more than 50 years. (Courtesy of Kim Kimrey)

Running the school independently would not be technically impossible, Coffey said, especially since so much of school is still virtual because of the pandemic. Hallahan has been operating partly online and partly in person this year. Still, Friends of Hallahan's primary goal is to convince the archdiocese to keep the school open, at least for another two years. If that effort fails and if running the school independently proves impossible, the money that has already been raised will go towards scholarships for former Hallahan students to attend other schools, Coffey said.

The archdiocese insists that it will close the school at the end of the year, but it has reneged on decisions to close other schools in the past. Jill Kimrey's older brother Jim graduated last spring from Roman Catholic High School, which the archdiocese planned to close in the 1980s before the school carried out a successful fundraising campaign and began operating independently. Hallahan just wants that same chance, Kim Kimrey said.