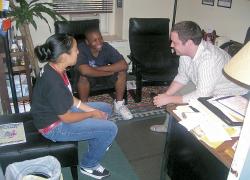 19th in the "In Search of the Emerging Church" Series.

CAMDEN, N.J. -- Camden is a place where a parish holds services to remember the tens of kids killed by gunshot and other violent means, a roll call of the dead of this peculiar urban warfare. Pick any day, any hour and drive past corners where the posture of the kids and their blank eyes say hopelessness.

So perhaps it is with what Fr. Andrew Greeley has termed “enchanted Catholic eyes,” those instruments of Catholic imagination, that one begins to construct a reason for hope in such circumstances.

There’s little overt religious talk that goes on at Hopeworks ’N Camden. There are no religious education classes here, no proselytizing, but the influence of religious, particularly Catholic, imagination is profound.

It is an organization that trains youth who eventually fill jobs created by the organization, which serves about 250 clients — businesses, nonprofits, educational institutions — providing computer and geographic information services.

Sean Dougherty, director of operations, is a longtime member of Camden’s Sacred Heart Parish, known for deep involvement in social justice work. A former partner in a video production company, Dougherty first met Hopeworks’ founder, Jesuit Fr. Jeff Putthoff, then associate pastor of Holy Name Parish, in the back of a paddy wagon. It was in 2003, the United States had just launched Shock and Awe in Iraq and the two were protesting the war. Three years later, after the video production partnership had ended, Dougherty, who had done a lot of volunteer work with youth, was looking to do something more formal and approached Putthoff about working with kids and video.

Bringing passion to what the world most needs

Putthoff, who opened Hopeworks in 2000, was at a point, recalls Dougherty, where he “needed to get his head out of the trenches and look around a bit.” He was looking for someone to run the place, and Dougherty took the job.

That same year, 2006, Patrick Keenan came on staff with the very Catholic sounding title of formation director. He was educated by Franciscans at St. Bonaventure University, which had a connection with Philadelphia’s St. Francis Inn, one of the older soup kitchens in the region. It’s open 365 days a year and serves hundreds a day.

Keenan, 26, spent a year there, gaining an understanding of how intractable the cycle of poverty can be. He discovered Hopeworks because it designed a Web site for St. Francis Inn. “I knew that when I saw Hopeworks, this was a place that could break that cycle, that could create a different world, a different space in which youth could really discover who they are without the pressures and demands from that outside world that’s very hard and unyielding.”

Hopeworks deals with youth (the agreed upon term for referring to those who attend its programs) beginning in eighth grade and ranging to 23-year-olds. Those who are out of school — either graduated, with a General Equivalency Diploma, or having dropped out — receive training from 9 a.m. to 3:30 p.m. At any time there are 10 out-of-school trainees learning in order to land a job with Hopeworks. Another four to six will be working at Hopeworks jobs during that same period.

At 3:45, those in grades eight to 12 arrive for training until 6 p.m. The organization operates a Web site business and a geographic information systems (GIS) business. “The technical training that they do prepares them in Web site development skills so we can hire them to do the work for us,” said Dougherty.

Programs vary in length and summer hours vary, so that in all about 200 youth a year are served. The organization has created nearly 300 jobs over its 10-year history, so that those completing training can step into a job, earn money and move on to the next level of education.

One goal is to move as many as possible to junior college and beyond. Nearly a hundred have done so.

But the real draw, listening to trainees, is the sense of community and safety they feel at Hopeworks. Formation, Keenan said, “comes from a religious sense, from the Jesuit communities. But formation is like Play-Doh. You take the can, turn it upside down and you’ve got this lump. … What everyone does is roll it around in their hands, play with it, come up with some ideas, mush it back together, shape something new.

“That’s what dreams are about,” he said. And dreams are big at Hopeworks. “The youth that we work with may have never been asked what they want to be or how they’re going to get there … they have no idea how to get there, so it’s about coming up with a plan and mashing those ideas around and forming them and making them their own, having them claim ownership for not just the dream, but the actions and the steps they need to do to achieve that dream.”

It’s the part that can’t be programmed that sustains their attention. Sil Rodriguez was in his early 20s when he first came to Hopeworks, accompanying a friend who didn’t want to go alone. Sil, an articulate 23-year-old holding a 3.5 grade point average his second year of community college, stayed on. He had dropped out of high school, achieved a GED in adult high school at age 16, and kicked around from job to job, hanging out with friends, before he arrived here. He got hooked because “I felt like it was a different place, like nothing I had experienced.”

Ashatai Anderson had a similar reaction. The 17-year-old graduated last year from Woodrow Wilson High School and now attends Camden County Community College. She came to Hopeworks via a job fair at her high school and stayed for more reasons than training. “It didn’t feel like you were in Camden,” she said. “It felt like you were someplace else.”