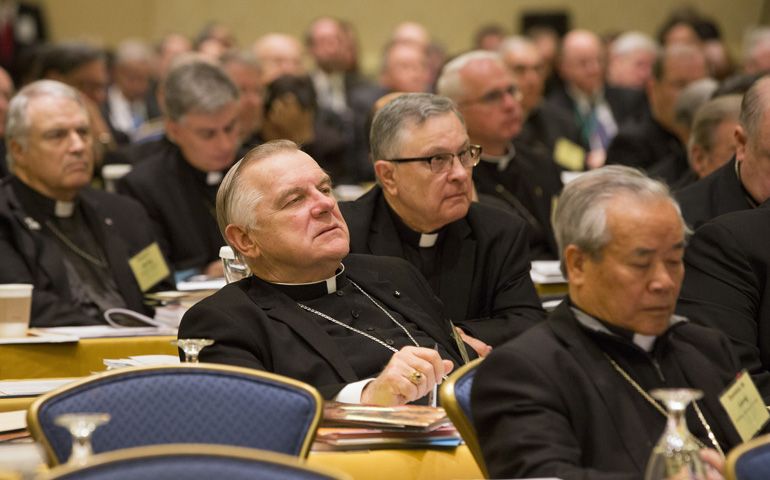 After a closed-door session at their annual meeting in Baltimore this month, the U.S. Catholic bishops issued an unusual "special message" reaffirming their long-standing opposition to the Obama administration's birth control insurance mandate.

On one level, the declaration and the united front were no surprise: The American church hierarchy has made opposition to the mandate a hallmark of its public lobbying efforts, framing the issue as an unprecedented infringement of religious freedom.

Several bishops even vowed to go to jail rather than comply with the mandate. Others threatened to shutter the church's infrastructure of hospitals, charitable ministries, schools and universities rather than accept a policy they say would force Catholic employers to provide health insurance that covers sterilization and perhaps abortion-inducing drugs as well as contraception.

"The government is willing to jeopardize a massive network of hospitals, schools, and social services by insisting they provide for services they find objectionable," Bishop Lawrence Persico of Erie, Pa., said in October as his diocese filed suit against the mandate.

But after repeatedly drawing that line in the sand, a growing number of bishops have begun to push back, arguing that such hard-line rhetoric has put them in an untenable position. These bishops do not want to close Catholic institutions over a birth control policy -- and they say they actually can't do so in most cases.

In addition, they argue that there is no reason to try -- the exemptions and accommodations in the mandate are sufficient, some say, and the church's teaching that access to good, affordable health care is a basic right should outweigh any remaining reservations.

That's why those familiar with the deliberations in Baltimore note that the statement is carefully worded to acknowledge that each bishop can make his own arrangements on health insurance -- as some are doing -- and it begins to provide cover for the entire hierarchy as the prelates try to find an exit strategy.

"The first step off the limb they have been climbing out on the past couple of years" was how National Catholic Reporter columnist Michael Sean Winters described the bishops' statement. His verdict was privately confirmed by a number of bishops who took part in what were described as "candid," though cordial, discussions.

Given the vocal and lengthy record of opposition by some members of the hierarchy, backing away from these ultimatums may not be easy. But hard-liners who have wanted to make a last stand out of the contraception mandate may be facing too many challenges to maintain their position.

For one thing, even bishops who oppose the mandate are hardly eager to exercise the "nuclear option" and shut down Catholic ministries. As Boston Cardinal Sean O'Malley said during the Baltimore meeting, "Closing the institutions down is also an evil for us."

O'Malley's opinions carry great weight since he is the top American adviser to Pope Francis, and the pope himself has made caring for the poor a priority for the church while also saying the church is often too focused on hot-button moral issues around sexuality. At the Baltimore meeting, the bishops signaled that they are also taking cues from their new pope and want to highlight other issues, which left the culture warriors somewhat isolated.

Moreover, the Obama administration has modified the original policy to such an extent that a number of bishops have publicly said they could find ways to live with it without closing ministries. "These kinds of scare tactics and worse-case scenario predictions are uncalled for and only unnecessarily disturb the hardworking and dedicated people who are employed by the Church," Bishop Blase Cupich of Spokane, Wash., wrote to his diocesan employees last February.

Another problem for the die-hards is that the mandate exempts dioceses and perhaps the Catholic schools, charities and other institutions connected to them. Given that protection, it's not clear that the bishops themselves would be subject to fines for not complying with the mandate, much less jail time.

The limited scope of the bishops' purview also points to what is perhaps the biggest obstacle for hard-liners: Bishops don't in fact control the vast majority of the institutions they say they would shut down.

For example, of the 630 Catholic hospitals in the United States, just 33 are controlled or sponsored by a bishop, and the Catholic Health Association, which represents all of those hospitals, has said it would accept the White House accommodation. Similarly, just 10 of the nearly 200 Catholic colleges and universities in the U.S. fall under diocesan auspices, and local Catholic Charities are often separately incorporated entities.

One option for the bishops could be to declare that organizations that work within the mandate are no longer officially "Catholic" -- a powerful threat if they choose to wield it.

But even moral theologians who back the bishops and oppose the mandate, such as Janet Smith of Sacred Heart Major Seminary in Detroit, have said Catholics can "morally comply" with the policy since they do so under duress.

None of this means the bishops are poised to drop their objections to the birth control mandate itself. Most still think it is problematic, and they are joined in that view by Catholics across the spectrum who say that at the very least it was a ham-handed policy solution and poorly executed by the White House. They expect sporadic confrontations as some church-affiliated groups or Catholic-owned businesses protest the mandate by refusing to pay fines or by dismissing employees or dropping health insurance.

Also, the Supreme Court could make this all moot by ruling in favor of the bishops. The justices on Tuesday are expected to decide which of the many challenges to the mandate they will take up, with the rulings expected in June.

But if the verdicts go against the bishops, they may well have few tools -- and little desire -- to take the battle much further.

Obama to employers: Notify workers if you're dropping contraceptive coverage