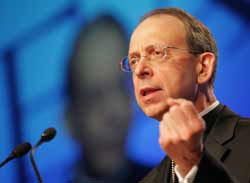 Saying that religious liberty, a basic right enshrined in the U.S. Constitution, "is now increasingly and in unprecedented ways under assault in America," the president of the U.S. bishops' conference today announced the formation of an ad hoc committee for religious freedom with the aim of protecting "our people from this assault."

Announcing the new ad hoc committee, Archbishop Timothy M. Dolan of New York called this "a new moment in the history of our conference."

The assault on religious liberty is coming "in an increasing number of federal government programs or policies that would infringe upon the right of conscience of people of faith or otherwise harm the foundational principle of religious liberty," Dolan said.

This assault, he said, "now appears to grow at an ever accelerating pace in ways most of us could never have imagined."

The announcement came today in a letter signed by Dolan and addressed to "My Brother Bishops." The letter was released about midday Friday.

"Support for the [ad hoc committee] work will include adding two full-time staff at the [bishops' conference offices], a lawyer expert in the area of religious freedom law, and a lobbyist who will handle both religious liberty and marriage issues," a press release from the bishops' conference said.

In his letter Dolan said, "The work of the ad hoc committee will begin immediately. ... This is because we cannot waste time in this vital area."

Explaining the urgency, he cited "new threats to religious liberty that have arisen just since [the bishops'] meeting in June":


In his letter, Dolan said, "The establishment of the ad hoc committee is one element of what I expect to be a new moment in the history of our conference. Never before have we faced this kind of challenge to our ability to engage in the public square as people of faith and as a service provider. If we do not act now, the consequence will be grave."

In a statement issued after Dolan's announcement, Lori said he welcomed "the opportunity to work with fellow bishops and men and women of expertise in constitutional law so as to defend and promote the God-given gift of religious liberty recognized and guaranteed by the Bill of Rights of the Constitution of the United States."

"This ad hoc committee aims to address the increasing threats to religious liberty in our society so that the church's mission may advance unimpeded and the rights of believers of any religious persuasion or none may be respected," he added.

The Democrats and the Wasserman Schultz problem

Pope Francis could educate the US president

Can Clinton-Kaine bring Catholic voters back to the Democrats?