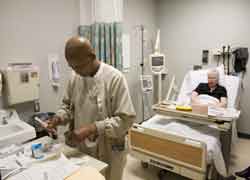 WASHINGTON -- It is possible to bring Catholic values to the ongoing debate over health care reform just as it was done earlier this year in forging a four-way agreement on the potential unionization of workers at Catholic hospitals, said Bishop William F. Murphy of Rockville Centre, N.Y.

"Leaders in Catholic health ministry, the labor movement and the Catholic bishops sought to apply our traditional teaching on work and workers and to offer some practical alternatives on how leaders of hospitals, unions and others might apply our principles as an aid to reaching agreements in their own situations," said Bishop Murphy, chairman of the bishops' Committee on Domestic Justice and Human Development.

The four-way document, "Respecting the Just Rights of Workers: Guidance and Options for Catholic Health Care and Unions," achieved "a consensus among all the parties on a set of principles, processes and guidelines for a respectful and harmonious approach to let workers in Catholic health care facilities make free choices about unionization," Bishop Murphy said.

The bishop highlighted details of the agreement in this year's Labor Day statement, issued annually by the chairman of the domestic justice committee. Dated Sept. 7, Labor Day, the statement is titled "The Value of Work: The Dignity of the Human Person" and was released Sept. 2 in Washington.

As they were in "Respecting the Just Rights of Workers," the bishops are committed to bringing "the principles of Catholic social teaching" to "each serious proposal" in the health care debate, he said, and will stand firm for conscience protections and against abortion funding.

Signing on to the unionization document were the U.S. Conference of Catholic Bishops, the Catholic Health Association, the AFL-CIO and the Service Employees International Union, which has been seeking representation rights for workers in the health care field.

The "two key values" agreed upon by the four parties were "the central role of workers themselves in making choices about representation" and "the principle of mutual agreement between employers and unions on the means and methods to assure that workers could make their choices freely and fairly," Bishop Murphy said.

"Health care is an essential good for every human person," he added, but the church has to remain "resolute" on "long-standing prohibitions on abortion funding and abortion mandates," while ensuring "freedom of conscience for health care workers and institutions," generally regarded as the right to not participate in abortion-related activities and other procedures in which they cannot in good conscience be involved.

By the same token, immigrants, most of whom "work hard, pay taxes, contribute to Social Security and are valuable members of our society, ... are denied access to health care services," Bishop Murphy said. "This should not happen in a society that respects the rights and dignity of every person," he said, adding that immigration and other laws must "guarantee fair treatment to the millions of immigrants in our country who contribute to our economy and the common good."

Bishop Murphy also drew on Pope Benedict XVI's encyclical "Caritas in Veritate" ("Charity in Truth"), calling it "a major point of reference for us all as we give thanks to God for the meaning with which God has endowed work as a reflection of the dignity of every worker."

He quoted the pope as saying: "The primary capital to be safeguarded is ... the human person in his or her integrity: Man is the source, the form and the aim of all economic and social life."

Bishop Murphy also quoted what the encyclical says about "decent work": "work that expresses the essential dignity of every man and woman in the context of their particular society; work that is freely chosen, effectively associating workers, both men and women, with the development of their community; work that enables the worker to be respected and free from any form of discrimination."

Decent work, the encyclical continued, also "makes it possible for families to meet their needs and provide schooling for children, without the children themselves being forced into labor, ... permits the workers to organize themselves freely, and to make their voices heard, ... leaves enough room for rediscovering one's roots at a personal, familial and spiritual level, ... (and) guarantees those who have retired a decent standard of living."

Bishop Murphy said Labor Day is the time "to recognize the value and dignity of work and the contribution and rights of the American worker." He also called on Catholics to remember "those without work and without hope"

This year the observance comes at time when the country faces a number of "challenging problems," including the current economic situation and worries about the future, he said, but Americans "are still fundamentally an optimistic people," who are committed to working together to address the nation's problems and "build on the strengths of who we are."

Mark Silk on the history of the term 'Judeo-Christian'

After clampdown in El Salvador, some worry human rights are in peril