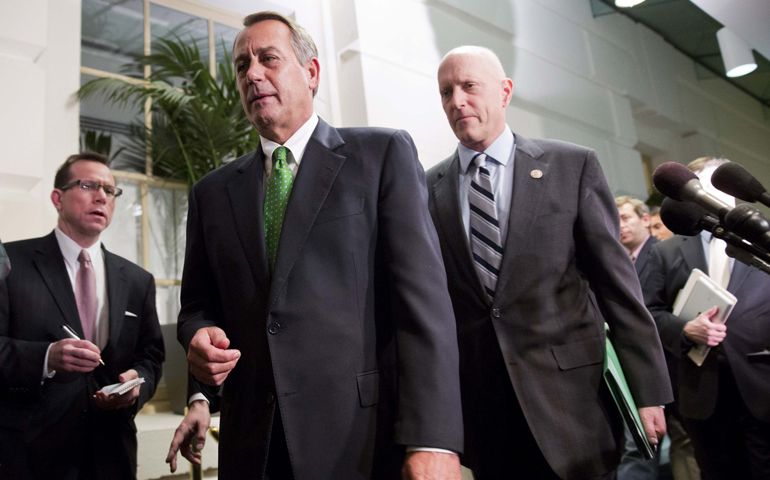 Speaker of the House John Boehner walks with Rep. Dave Camp, R-Mich., after a meeting with House Republicans about a "fiscal cliff" deal on Capitol Hill in Washington Jan. 1. (CNS/Reuters/Joshua Roberts)

Washington — The American Taxpayer Relief Act of 2012 -- and 2013, considering when the House of Representatives passed it -- will be known as much by what it doesn't include as what it does include.

The legislation, among other things, extends the farm bill by nine months, which prevents milk prices from doubling. But the extension also keeps intact other provisions that farming advocates say are wasteful.

Bob Gronski, a policy analyst for the National Catholic Rural Life Conference, said he was "disappointed with the lack of reform and the lack of money for conservation programs" in the farm bill extension.

"(Congress) didn't change the direct payments -- they were going to eradicate those, right? -- under the proposed bill, and that didn't happen. So there was disappointment with that. And the (U.S. Conference of Catholic Bishops) and we have been calling for that."

Even so, Gronski told Catholic News Service, "we were 36 hours away from going over the cliff. So Mitch McConnell and Joe Biden got together and did what had to be done." Biden, who as U.S. vice president is president of the Senate, and McConnell, R-Ky., the Senate minority leader, brokered the bill that passed 89-8 in the Senate and 257-167 in the House.

The Rev. David Beckmann, a Lutheran minister who is president of Bread for the World, an anti-hunger lobby, said the compromise legislation "isn't perfect, but it is a good deal that will prevent major economic damage that would have affected hungry and poor people the most."

He said positive elements in the bill include a five-year extension on improvements made to the earned-income tax credit and child tax credit over the last decade, and the one-year extension of emergency unemployment benefits for one year, which will affect an estimated 2 million out-of-work Americans.

"Budgets are moral documents. Their impact on those whom the Bible refers to as 'the least of these' tells the world what kind of country we are," he said in a statement Wednesday.

The legislation includes permanently lower income tax rates for an estimated 98 percent of Americans -- no more sliding deadline for cuts originally enacted when George W. Bush was president -- but no agreement on how to deal with tax breaks and loopholes.

The bill increases taxes on individuals making $400,000 a year and couples making $450,000 a year that will garner, by White House estimates, an extra $737 billion in revenue in the next 10 years, but there's no action on a debt ceiling that has already hit the $16 trillion mark.

It puts off for two months the specter of sequestration, the automatic budget cuts that go into effect if no agreement is reached.

"If Congress refuses to give the United States government the ability to pay these bills on time, the consequences for the entire global economy would be catastrophic -- far worse than the impact of a fiscal cliff," he said.

In separate remarks Wednesday, Obama urged the House to vote on Hurricane Sandy relief aid that day, before the 112th Congress adjourns; the new Congress elected in November is to be sworn in Friday.

"The Senate passed this request with bipartisan support. But the House of Representatives has refused to act, even as there are families and communities who still need our help to rebuild in the months and years ahead, and who also still need immediate support with the bulk of winter still in front of us," he said.

Members of Congress and other elected officials from the affected states lashed out at House leaders Wednesday for not having taken a vote. Gov. Chris Christie, R-N.J., said the inaction was another reason why voters "hate Congress."

Rep. Peter King, R-N.Y., said he was promised by House Speaker John Boehner, R-Ohio, that separate votes on Sandy relief would be held Friday and Jan. 15 in the new Congress, which would then require a new vote by the Senate.

Some see a link between poverty, moral issues affecting the family