Does Catholic Church have much influence when lobbying on Capitol Hill? 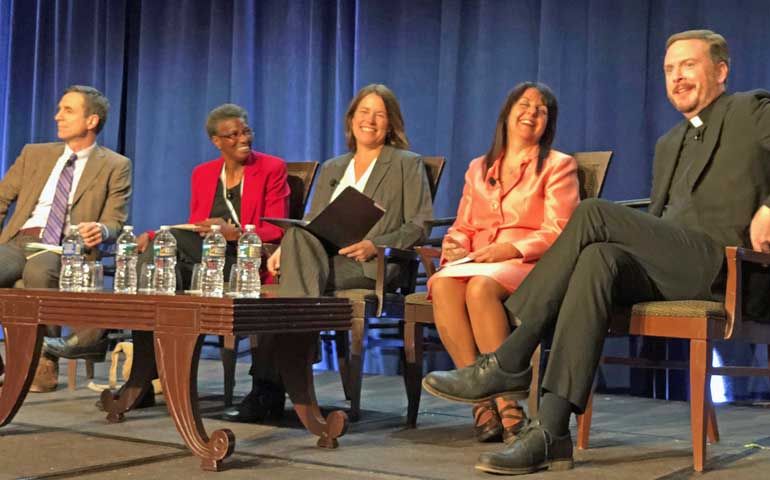 Washington — On the third day of a four-day gathering of Catholic social ministers, the otherwise bipartisan — some might say even apolitical — conference exploded with fiery, frank words about the current political climate in this country.

"We have to admit that … 50 percent of Catholics voted for 'Mr. #45,' " said Sr. Patricia Chappell, executive director of Pax Christi USA, referring to President Donald Trump.

Citing the current administration's problematic policies on health care and immigration, as well as Trump's repeated insults of Africans and African-Americans, she asked, "Where are we as a Catholic Church speaking out against this?"

Chappell, a Sister of Notre Dame de Namur, quoted civil rights heroine Fannie Lou Hamer: "I'm sick and tired of being sick and tired," drawing applause from — and perhaps speaking for — many of the 500 attendees at the Catholic Social Ministry Gathering.

The annual gathering has been held in Washington, D.C., for more than 25 years, although it was on hiatus last year because of the U.S. bishops' "Convocation of Catholic Leaders" event, held in Florida in July. This was the first social ministry gathering since Trump's election, although his name was surprisingly absent from keynote and other presentations.

Chappell's comments came during a plenary session on the challenge of polarization in the culture and in the church. The five-person panel included the equally provocative editor of the conservative journal First Things, who admitted he was likely invited to say "controversial things."

"We have to stop cheerleading for openness, fluidity and diversity," said R.R. "Rusty" Reno, arguing that a post-World War II emphasis on "open borders, open minds and open societies" has weakened national and communal solidarity.

Reno also criticized Pope Francis' image of the church as a "field hospital," saying the church needs to give people who are hurting "solid things" rather than "a tent flapping in the wind … something impermanent and moveable."

Reno also cautioned against applying the church's universality to national policy on immigration. "If you don't have a home, you cannot exercise hospitality," he said. "We have to think prudently about what the limits are, about maintaining national solidarity and a sense of the common good."

Immigration and other issues

That was hard to hear for Ruth Umanzor, a senior at St. Thomas University in St. Paul and one of more than 100 college students at the social ministry gathering. The substantial numbers — 20 percent of attendees, representing 26 colleges and universities — was the result of an intentional outreach to younger Catholics by organizers.

Umanzor is a recipient of the Deferred Action for Childhood Arrivals (DACA) program, and the uncertainty about her future because the program's protection from deportation may end is causing her and her family anxiety, not to mention delaying her plans for graduate school.

"I, like many other 'Dreamers,' consider the U.S. to be our home," Umanzor told NCR. She also shared her story with legislators as part of the lobbying action of the last day of the social ministry gathering.

Support for a Dreamer bill that would provide a pathway to citizenship for immigrants brought illegally to the U.S. as children was identified as one of three legislative priorities by the gathering's organizers, which include the U.S. Conference of Catholic Bishops' Department of Justice, Peace and Human Development and 16 other national Catholic organizations.

The strategy — from the bishop's Office of Migration Policy and Public Affairs — argued for a narrow bill that secures protection for Dreamers and looks to broader immigration reforms in the future. Other Catholic leaders, including Cardinal Joseph Tobin of Newark, New Jersey, (who spoke at nearby Georgetown University during the gathering), have called for a "clean" DACA bill, which does not compromise by agreeing to a border wall or increased security in exchange for protection for Dreamers.

The other two legislative issues identified for lobbying by attendees at the social ministry gathering were funding for domestic social safety net programs and poverty-reducing international assistance/diplomacy.

Although Reno's positions on openness, diversity and immigration were likely not shared by the majority of the social ministers attending the conference, he was included precisely to present different viewpoints, according to organizer Jonathan Reyes.

"We would like to believe that the church is a place you can have principled disagreement," said Reyes, assistant general secretary for integral human development for the U.S. bishops. "If we can't do it, who can?"

Aside from the panel on polarization, overt references to politics were relatively rare from the speakers at the event. "We try to stay out of this as a partisan fight and go by issue: What do we care about, and how do we best advance that issue?" Reyes told NCR.

Yet in smaller groups, some attendees wondered if the Catholic Church had made a mistake and "sold out immigrants" by emphasizing abortion and religious liberty as primary political issues in the 2016 presidential election.

Studies of party affiliation show that Catholics are about evenly split among Democrats and Republicans, depending on the issues voters are likely to emphasize. The Republican Party has courted Catholic voters who prioritize pro-life issues related to abortion, while those who consider other social justice issues — such as immigration and social safety net programs — are more likely to vote Democratic.

That split has diminished Catholics' lobbying influence, believes theologian James Bailey of Duquesne University in Pittsburgh, who was attending the social ministry gathering for the first time.

"But the church has a credibility that other institutions don't because its positions come out of a faith tradition, not a political one," Bailey said.

The inability of one party to speak to all issues the church cares about means Catholics are "politically homeless if we follow Catholic social teaching," Tom Dwyer, chair of the national Voice of the Poor Committee of the Society of St. Vincent de Paul, told those attending a workshop on "Finding the Common Good in a Throw-Away Culture."

While much has been made about the influence of evangelical Christians on the current president and legislators, it can be difficult to compare evangelicals' influence to that of Catholics, Reyes said. Still, the church's voice matters, he said.

"I'm happy to say the faith voice still gets a hearing," he said. "Whether it is determinative depends on the issues and who you're trying to influence."

To that end, attendees headed to Capitol Hill on the gathering's last day to meet with their legislators and to argue for the priorities of immigration, domestic social safety net programs and international development aid.

At a closing reception — bipartisanly sponsored by Democratic Sen. Joseph Donnelly of Indiana and Republican Sen. Marco Rubio of Florida — most attendees reported positive meetings, in which congressional staffers listened attentively to their concerns.

Lea Sanon of Takoma Park, Maryland, said her lobbying was well received. "They were pleased we were making our voices heard," she said. "I think it makes a bigger impact because we are Catholic."

But Ann Grelecki Anderson of Chicago wondered if Catholics would have more impact "if we were a strong, unified voice."

Vincentian Fr. Perry Henry of Los Angeles said he recognizes the reality of politically divided Catholics. "When I preach, I preach to a congregation that falls on both sides," he said. "Part of the problem is that we aren't listening to each other."

But for Umanzor, being able to speak about her fears and concerns as a Dreamer to legislators from Minnesota was invaluable. And the conference itself — which emphasized social action rather than just spirituality — was life-changing, she said.

"This is the action part of our faith, what we're doing for our community, for our neighbor, for everyone who is vulnerable," she said. "We're all in this together."

A version of this story appeared in the Feb 23-March 8, 2018 print issue under the headline: Social ministry gathering aims for bipartisanship .

Border bishops call for dignity regardless of "migration condition"