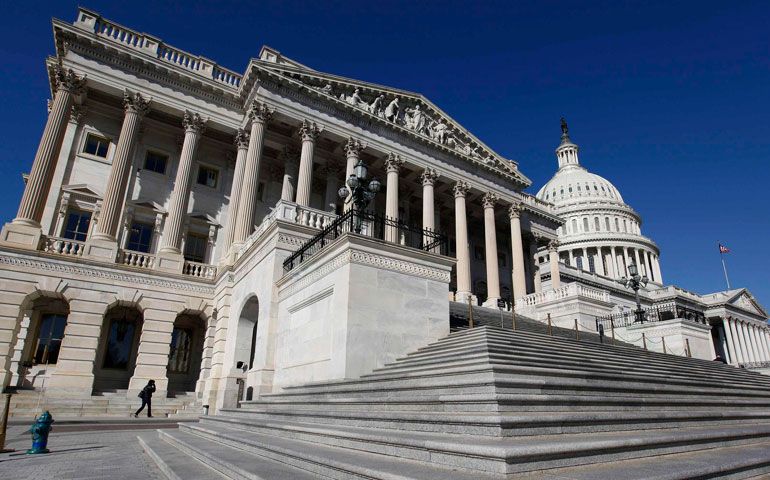 The U.S. Capitol dome is seen behind the entrance to the House of Representatives on Capitol Hill in Washington. (CNS/Reuters/Larry Downing)

A diverse group of political players met at Georgetown University to discuss the moral implications of partisanship in April. The evening's discussion was the fifth event sponsored by John Carr's Initiative on Catholic Social Thought and Public Life and, in a city drowning in partisan gridlock, an examination of the moral issues surrounding partisanship seemed overdue.

The night opened with incisive comments from San Francisco Auxiliary Bishop Robert McElroy, who began by praising those who make the sacrifices necessary to enter politics, but also reminding them that "the political vocation is a profoundly moral one."

McElroy noted that the founders were deeply suspicious of partisanship, or what they called "faction." They thought parties were necessarily divisive and there is no shortage of echoes of those early American criticisms today. Gridlock is everywhere, and it is attitudinal as well as structural. "Party pressure can distort legislators' perception of the common good," McElroy said.

Nonetheless, parties have also served as vehicles for the common good. McElroy mentioned the formation of the Republican Party in the late antebellum era, and how it did what parties do -- brought large numbers of people into political participation on behalf of an important goal, the defense of "free soil." He cited the Democratic Party's enactment of the New Deal in the wake of the Depression, and the progressive reforms of both Theodore Roosevelt's Republicans and Woodrow Wilson's Democrats.

"Catholic social teaching envisions a vital role for parties in advancing the common good," McElory told the audience. It is "uniquely powerful to stimulate participation."

He urged Catholics to risk becoming "insurgents within their own parties," challenging party orthodoxy when it conflicts with Catholic social teaching, leavening public discussion, and reminding all political actors that "the moral end of politics is the achievement of the common good in society."

Carr then led a panel discussion on the moral implications of partisanship, and the panelists each demonstrated evidence of what McElroy had encouraged, the willingness to be "insurgents" within one's own party.

Kathy Dahlkemper, a former one-term congresswoman from Pennsylvania, talked about the night she and other pro-life Democrats appeared before the House Rules Committee, during the chamber's consideration of the Affordable Care Act, to make the case for the Stupak Amendment, which would have attached the Hyde Amendment's prohibitions on taxpayer funding for abortion to the act. The Rules Committee chair asked her who she was -- it was her first term. She told her story of being a single mother who got pregnant when she did not expect to, but kept her child and could not have been happier.

Dahlkemper told the audience that on that evening she said to herself, "This is the reason I'm in Congress." She also told how she approached the Susan B. Anthony List for support, seeing as the group's stated objective is to elect pro-life women, but they declined to support her because she is a Democrat.

Michael Steele, former lieutenant governor of Maryland and former chairman of the Republican National Committee, talked about the first time he and the rest of the cabinet met with Gov. Bob Ehrlich to discuss a death penalty case. Ehrlich favored the death penalty, as did the rest of his colleagues, but Steele, a Catholic, was opposed. When asked his opinion, he explained his opposition and they all thanked him, including the governor.

The governor decided to execute the person, but Steele had made the case in the inner sanctum. Courage is required to do something like that, even when the cameras are not watching.

The two other panelists, former White House press secretary Michael McCurry and political strategist Mark McKinnon, brought a different perspective to the discussion, and evidenced one of the most obvious facts about political life in Washington: the power of unelected campaign strategists.

The evening finished with comments by Republican Rep. Walter Jones of North Carolina and Democratic Rep. Marcy Kaptur of Ohio. Both have broken with party orthodoxy -- Jones on the Iraq War and Kaptur on abortion. Both have paid a price for distancing themselves. Both spoke passionately about how their faith informs their public service. Both are the kind of insurgents within their party that this town needs more of.