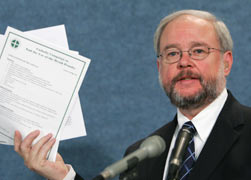 WASHINGTON -- Bishops who work closely with John Carr, who oversees the Catholic Campaign for Human Development, say new claims against him and the agency are false and "totally ridiculous."

Bishops William F. Murphy of Rockville Centre, N.Y.; Roger P. Morin of Biloxi, Miss.; and Howard J. Hubbard of Albany, N.Y., spoke with Catholic News Service Feb. 3 and 4 about recent allegations of "a systemic pattern of cooperation with evil" by the U.S. Conference of Catholic Bishops because of Carr's past involvement with the Center for Community Change.

"I'm concerned about these attacks on John Carr and I know they are false and I think they are even calumnious," said Murphy , who chairs the USCCB Committee on Domestic Justice and Human Development, by telephone to CNS. "I am taking this to be a very sad, sad commentary on the honesty of some people in these pressure groups."

"Personally I think [the claims] are totally ridiculous," said Morin, who chairs the USCCB subcommittee that oversees CCHD, the bishops' domestic anti-poverty initiative, in a separate telephone interview.

Hubbard, chairman of the USCCB Committee on International Justice and Peace, told CNS Feb. 4 by telephone that he had worked with Carr for more than 30 years and "always found him to be a staunch opponent of abortion."

A report released Feb. 1 by the Reform CCHD Now Coalition, a group that includes the American Life League, Human Life International and Bellarmine Veritas Ministry, said the Washington-based Center for Community Change "has lodged itself into the highest places of power in the USCCB while working to promote abortion and homosexuality."

Carr, executive director of the USCCB's Department of Justice, Peace and Human Development, said he stepped down as chairman of the center's board in February 2005, and the board never addressed those issues during his tenure.

"My experience with CCC was that it focused on poverty, housing and immigration and had no involvement in issues involving abortion and homosexuality," Carr said. "When I served, the board never discussed or acted on any position involving these matters, and if they had, I would have vigorously opposed any advocacy for access to abortion or gay marriage."

Carr was interim CCHD executive director from 2007 to early 2008. With the USCCB restructuring in 2008, he took over a department that consolidated CCHD and the former Department of Social Development and World Peace.

Carr said the CCHD Web site had recommended the Center for Community Change for its anti-poverty work, but when the coalition's report disclosed that the center supported abortion ("It was news to us," he said), the recommendation was removed.

The American Life League and Human Life International are Virginia-based groups that oppose abortion and advocate on other pro-life issues. Bellarmine, based in Texas, describes itself as "a Catholic grass-roots organizing ministry dedicated to truth and action."

The Center for Community Change says its mission is to "build the power and capacity of low-income people, especially low-income people of color, to change their communities and public policies for the better."

According to the Reform CCHD Now Coalition, 31 organizations that have received CCHD grants are among the more than 150 groups that have "partnered" with the Center for Community Change.

Much of the coalition's report is based on "guilt-by-association" arguments that identify activities by non-CCHD-funded organizations that have worked with the Center for Community Change and that promote activities contrary to church teaching.

It cites, for example, the center's involvement with the National Coalition for Immigrant Women's Rights, which in its guiding principles supports "the repeal of all federal and state-level restrictions on access to reproductive health services by immigrant women and their children." The immigrant group does not receive CCHD funds.

Jeff Parcher, communications director for the center, said there is no "formal application process or vetting process" for its partner organizations, which may choose to work only on a center-led jobs campaign, for example, or a campaign for immigration reform. Partners may represent a variety of viewpoints on issues unrelated to the center, he said, adding that "we don't look at the entire list of what they're involved in."

The center "has not to my knowledge been involved in any advocacy in regard to same-sex marriage," Parcher said, but did "weigh in on how the Stupak amendment would affect low-income women of color." The center opposed the amendment that would have prohibited federal funding of abortion in House health care legislation, saying it could harm the health of poor women.

Carr said no one from American Life League or Bellarmine had contacted him or anyone else at the CCHD or USCCB before the report was issued.

"I have spent my personal and professional life defending human life and dignity and Catholic teaching, including current efforts to keep abortion funding out of health care reform," he said.

"I regret that once again the failure to contact me or CCHD has led to unfair allegations in attempts to undermine the essential work of the Catholic Campaign for Human Development," Carr added.

Morin said he also has been subject to attacks "almost from the time I became chairman" of the CCHD subcommittee.

"You can have one person with a Web site call you a left-wing radical, and my family is asking me, 'What's going on?'" he said. "We're doing the same thing we've always been doing -- what is right and good and just."

Bishop Morin said that although Carr's primary focus over the years has been on social justice issues, "that does not take away one bit from his commitment to the sacredness of human life."

Pavone said he had received several inquiries about the accusations against Carr and felt compelled to respond "because I am in a position to answer that question, and because of the fact that hurting people's reputations never serves our cause."

"I have had many opportunities to talk to and listen to John over the years, in public and in private, to read his articles, and to discuss our common goal of seeing social justice and peace applied to our neighbors in the womb," Father Pavone said in a blog on the Priests for Life Web site. "His record is clear, and unlike some others, when he talks about justice and peace and human development, he does not fail to include the unborn."

The priest urged his fellow pro-lifers to use "great caution to preserve the good reputation to which all of our colleagues have a right."

"He worked diligently to keep abortion out of the many recent health care reform efforts," Grenchik added. "Were it not for his efforts and those of others, our country would now be funding abortion and health plans that provide abortion, on a massive scale."

"This challenge is far from over, and John remains steadfast in his effort to advocate for health care reform that protects human life," he said.

Hubbard said an example of Carr's commitment to the pro-life cause was Carr's decision to cancel a trip to Jordan and Israel this December during the "fierce debate" in Congress over health care reform.

"He felt he had to be [in Washington] to promote legislation that would not be funding abortion and that would include conscience protections," the bishop said. "That's indicative of how supportive he's been to the whole spectrum of life issues."