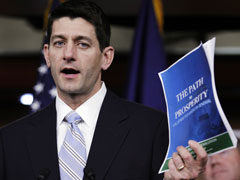 For the first time in history, Catholic will oppose Catholic on the presidential tickets of the two major political parties. With Congressman Paul Ryan of Wisconsin as the Republican Party's vice presidential candidate and incumbent Vice President Joe Biden for the Democrats, the role of the Catholic church and its teachings is guaranteed to be front and center in the fall campaign.
{C}
Ryan is a new breed of Catholic politician. He rose to prominence on the strength of budget proposals that would radically alter the social safety net. Ryan backed President George W. Bush's plan to privatize Social Security. As chairman of the House budget committee, he calls for turning Medicare from a guaranteed benefit into a program in which seniors get a voucher to buy health insurance on the private market. The Ryan budget also cuts deeply into programs designed to assist the poor.

For all these reasons, the U.S. Conference of Catholic Bishops stated earlier this year that the budget fails to meet the moral criteria they set out: It fails to protect human dignity, assist the poor and promote the common good.

Ryan, however, is a reliable pro-life vote when it comes to abortion. 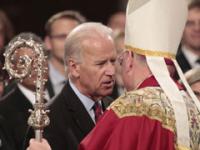 Biden is more of an old-school Catholic politician. Deeply influenced by the church's social teachings, Biden supports programs that help the poor and entitlement programs that assist all Americans by providing access to things like health care, which the church has long taught are essential rights of the human person. On the other hand, Biden supports legalized abortion and has not raised his voice publicly in opposition to the Department of Health and Human Services' contraception mandate that has been at the heart of the bishops' religious liberty campaign.

This year, the bishops have made religious liberty a central issue, but it is far from clear that the issue resonates broadly with voters. Ryan is part of the House leadership that pulled a measure from a vote that would have provided more robust conscience exemptions from the contraception mandate. The bill had the backing of the U.S. bishops, but became a political loser after Rush Limbaugh called Georgetown University Law student Sandra Fluke a "slut" for arguing she wanted contraception coverage as part of her school's insurance policy. But Ryan and the presumptive Republican presidential candidate Mitt Romney have both supported overturning the Affordable Care Act, so the mandate would disappear if they were elected.

Ryan has been at pains to shed his image as an Ayn Rand-loving libertarian, and has turned to Catholic social teaching for help. He has said that he now eschews Rand and prefers St. Thomas Aquinas, and has said his budget proposals reflect the Catholic principle of subsidiarity.

"Despite his often quick reference to the concept of subsidiarity, Congressman Ryan does not understand it well," said Stephen Schneck, director of The Catholic University of America's Institute for Policy Research & Catholic Studies in Washington. "He seems to think that it is about allowing economic markets to do what government now does or he imagines that it is about reducing government regulations. Subsidiarity, of course, is actually the ethic by which the parts of a corporate community are properly empowered for the common good of whole community."

Schneck, who co-chairs Catholics for Obama, notes that the word subsidiarity comes from the Latin root subsidium, or help.

Some Catholics have voiced concern that Ryan's use of Catholic concepts actually undercuts his commitment to the pro-life cause. "Many of us are puzzled when those against abortion, who are committed to life issues, try to link their agenda with a budget plan like that of Rep. Ryan, which would take food from hungry families, deny lifesaving healthcare to millions of families, and push vulnerable people further into poverty," wrote Social Service Sr. Simone Campbell, director of the Catholic lobbying group NETWORK, in an essay published by the online journal of the Danforth Center on Religion & Politics at Washington University in St. Louis. Indeed, the Affordable Care Act provides some $250 million to fund provisions from the Pregnant Women Support Act that were folded into the law. That money would disappear if the health care law were repealed.

"Some of the most fundamental issues for the formation of a Catholic conscience are as follows: sacredness of human life from conception to natural death, marriage, religious freedom and freedom of conscience, and a right to private property," Morlino wrote.

His comments do not track with most experts in Catholic social teaching. As far back as St. Thomas Aquinas, the right to private property was never considered absolute and it is more than a little curious that Morlino did not mention any of the moral criteria set out by the U.S. Conference of Catholic Bishops for evaluating a budget.

Ryan's former pastor, Fr. Stephen Umhoefer of Nativity of Mary Parish in Janesville, was less enthusiastic. He told the Center for Media and Democracy, "If [Ryan] is following his conscience, he is doing the morally correct thing. But he shouldn't wrap himself in Catholic teaching because he is not using that [teaching] in what I would say is a balanced way." Umhoefer specifically cited the hyper-individualism that Ryan evidently learned from Rand. "An excessive attitude of individualism is doing a great deal of harm to us as a society because we are forgetting society values," Umhoefer said.

Cardinal Timothy Dolan of New York also jumped into the fray, noting that he knew Ryan well from his tenure as archbishop of Milwaukee and that while they disagreed sometimes, they had a good working relationship. Dolan called Ryan "a great public servant."

But Dolan also took the long view in assessing the significance of two Catholics competing for the vice presidency. Dolan told National Review, "We've got two men who -- and you can disagree with one of them or both of them -- say they take their faith seriously, don't try and hide it, and who say, 'Hey, my Catholic upbringing and my Catholic formation influences the way I think.' Not bad. Not bad."

Perhaps the real lesson from the Ryan-Biden contest will be to remind Catholics that what they share in faith transcends what divides them in politics.

[Michael Sean Winters writes about religion and politics on his Distinctly Catholic blog on the NCR website, at NCRonline.org/ blogs/distinctly-catholic, first place finisher for Best Individual Blog in the 2012 Catholic Press Association competition.]

No push to punish Notre Dame for Obama invite