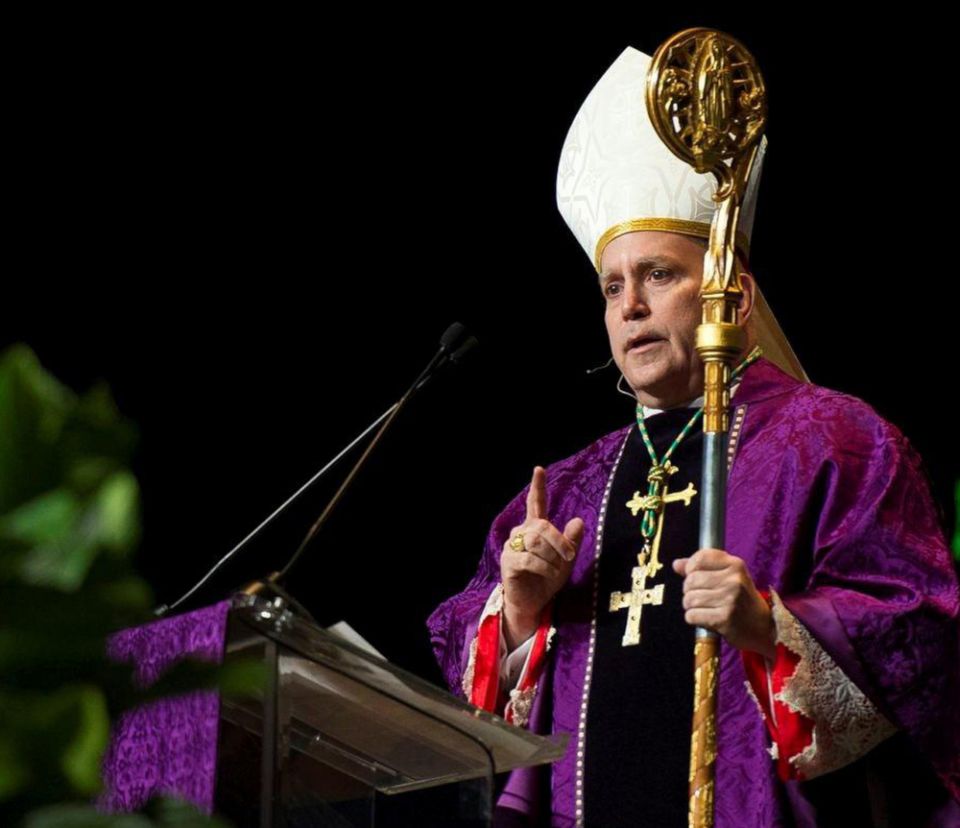 Archbishop Samuel Aquila of Denver is pictured in a 2013 photo. Archbishop Aquila announced his opposition to Colorado's proposed comprehensive sex education bill for public schools because it recognizes "many genders" and would not allow abstinence information. (CNS/Denver Catholic Register/Daniel Petty)

Denver — Colorado lawmakers are considering a bill to require all public schools and charter schools "to either use a comprehensive sex-ed curriculum that contradicts human nature and is inconsistent with Christian values, or to provide no instruction on sexuality at all," Denver's archbishop said in a letter read at all Masses Jan. 27.

"We know that God made us male and female, in his image and likeness, but the comprehensive curriculum route which most schools will likely adopt teaches innocent children this is not true," Denver Archbishop Samuel Aquila said.

"Specifically, public schools would have to promote abortion as an equal option to life, and parents wouldn't be notified before lessons were presented on gender-identity and sexual orientation," he added. "Each of us must do our part to fight this legislation."

In the letter, released the first day of Catholic Schools Week in the U.S. church, the archbishop said the "work of Catholic schools cooperating with parents in forming the minds, hearts and souls of our children plays a key role in the future of our church and society."

According to the text of the bill, it "clarifies content requirements for public schools that offer comprehensive human sexuality education."

"(It) prohibits instruction from explicitly or implicitly teaching or endorsing religious ideology or sectarian tenets or doctrines, using shame-based or stigmatizing language or instructional tools, employing gender norms or gender stereotypes, or excluding the relational or sexual experiences of lesbian, gay, bisexual, or transgender individuals," according to the text.

The Colorado Catholic Conference, which represents the state's Catholic bishops on public policy matters, said in a statement that among its other objections is the fact the measure will keep local school districts from deciding themselves on the content for sex education for their students.

The statement added: "Parents are the primary educators of their children and education policy must be crafted in a manner that places the needs of the children and parents first."

The Catholic conference also said the measure is does not clearly outline what notification process there would be for parents who want to opt out of the sex education program for their children, and "the ability for a school to receive a waiver from teaching the content is unclear."

The bill, which is backed by Planned Parenthood and the American Civil Liberties Union, would prohibit public schools from teaching abstinence-only sex education. According to a Denver Post story, the bill would require the schools to have a comprehensive sex ed or none at all.

The Post also said these sex-ed classes must include "medically accurate information about all preventive methods to avoid unintended pregnancy and sexually transmitted infections, including HIV/AIDS."

In his letter, Aquila said the sex-ed measure in the Legislature is just one example of how the "surrounding culture has become increasingly challenging for Christians."

"Our Catholic schools are more than you realize," he said in conclusion. "They provide a haven amidst our morally confused culture, educate the whole person and assist parents in forming their children in an authentically Catholic worldview, one that recognizes the dignity of the human person created for God."