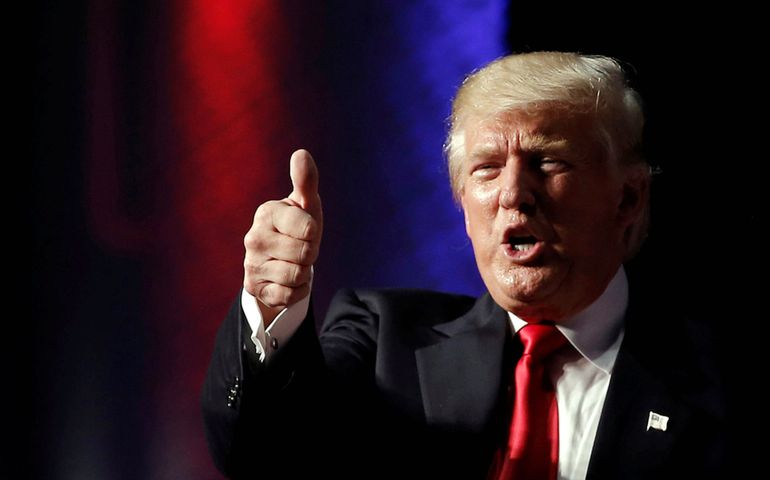 Congratulations, President-elect Donald Trump. Defying the pollsters, you won a narrow victory. As president-elect, you must begin to heal the wounds of a divisive campaign for which you bear heavy responsibility.

Although deep wounds of poverty, racism, unemployment and underemployment, sexism, and misogyny preceded your candidacy, your campaign exacerbated these wounds.

Recalling Pope Francis' address to the U.S. Congress last year, your presidency must be one of "hope and healing, of peace and justice."

Healing the wounds of a divided nation demands that you reach out to supporters of Hillary Clinton. If you begin by seeking forgiveness for your derogatory campaign rhetoric, you will gain credibility and trust to govern.

Rhetoric alone is insufficient. Both your speech and policies must communicate genuine respect for the full dignity and equality of women, African-Americans, Latinos, Muslims, people with disabilities, and the lesbian, gay, bisexual and transgender community.

Restoring trust in the democratic process demands that you retract your threat to jail Clinton, declare your undivided support for a free and independent press, and work to restore the Voting Rights Act.

Catholics helped elect you to defend unborn life. You can extend your commitment to human dignity by embracing a consistent political ethic of care for the most vulnerable among us, including children, immigrants, and all people marginalized by racial and economic oppression.

A consistent ethic of care recognizes how the common good includes the Earth. The pope, environmental justice advocates and scientists call upon you to recognize that the basic science of how greenhouse gases trap heat has been clear for over a century.

In his encyclical "Laudato Si', on Care for Our Common Home," Francis invites a wider "culture of care" that develops an "integrated approach to combating poverty, restoring dignity of the excluded, and at the same time protecting nature."

The pope thus calls for a courageous and responsible effort to "redirect our steps" from reliance on fossil fuels to renewable sources of energy that promote full thriving for all forms of life. By supporting the Paris Agreement on climate change, you will gain credibility and stature at home and internationally, and you will help our nation transition to sustainable sources of economic growth in the 21st century.

Both you and Clinton support massive reinvestment to create employment and rebuild the nation's infrastructure. This should be a cornerstone of your agenda to build an inclusive economy. The American Society of Civil Engineers, which annually grades the nation's infrastructure systems, most recently gave the U.S. a D+. This problem is compounded by the fact that there are not enough qualified construction workers for jobs that will be needed well into the future.

While President Barack Obama led the way out of financial crises through the American Recovery and Reinvestment Act, which included $140 billion to rebuild infrastructure, the nation is in profound need of an even more ambitious "new New Deal." A just and equitable future depends on repairing and expanding roads and bridges, building a clean energy infrastructure for the 21st century, and connecting all Americans to the internet.

A consistent political ethic of care includes international relations. You gained support among veterans because you denounced the harsh costs of war. Catholic peace advocates will support every effort to ameliorate war's costs by fully acknowledging and healing post-traumatic stress disorder among our veterans and their families. Peace advocates will challenge you to prevent and de-escalate conflict and support local institutions that can create a lasting and just peace.

Social justice advocates will demand that you turn away from every form of fundamentalism. This includes a simplistic association of Islam with terrorism. In his address to Congress, Francis invited a "a delicate balance" between combating violence perpetrated in the name of religion and safeguarding religious, intellectual and individual freedoms.

Sadly, however, the United States seems too willing to fall into a fundamentalism of war and technology. If the United States imitates the hatred and violence of tyrants and terrorists, the pope warned, that will only perpetuate the cycle of violence.

While drone technology is purportedly utilized to protect civilian life, we know of too many instances where U.S.-led drone strikes have killed innocents and devastated whole communities. When the United States remains silent and/or denies these atrocities, we lose moral credibility against tyrants and terrorists and foment new sources of violence.

Francis laments how wars create a "refugee crisis of a magnitude not seen since the Second World War." Catholic immigrant advocates call upon you to lead a nation that welcomes Muslims and immigrants of all faiths, including Syrian, African and Latin American refugees.

By drawing on a consistent political ethic of concern for all vulnerable forms of life, including the Earth, you can restore hope, right wrongs, and cultivate full human thriving for all people. Catholic social justice advocates challenge you to embody this demanding prayer and work for healing, justice and peace.

[Alex Mikulich is an anti-racist theologian and co-author of The Scandal of White Complicity in U.S. Hyper-Incarceration: A Nonviolent Spirituality of White Resistance (Palgrave, 2013).]

Voters should read this powerful editorial