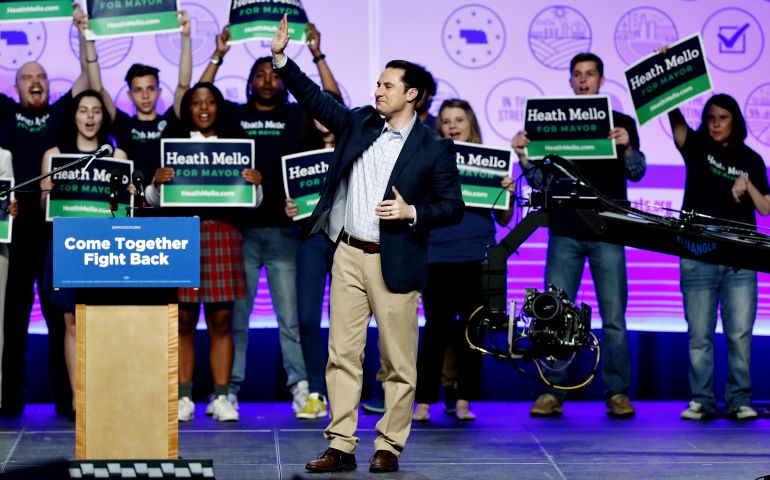 The Democrats have joined their Republican counterparts in a reductio ad absurdum brand of politics, declaring that anyone who does not agree with the most extreme pro-abortion rights views can go elsewhere. We now have the full flowering of the politics of utter stupidity, a foreseeable consequence of the culture-warrior approach to public policy.

For decades, Republicans have held hostage reasonable political discourse by leveraging their influence on the fulcrum of the abortion debate. The debate itself need go nowhere. In fact, the clear wish over decades was that it not move, only that the party be able to leverage its other political ambitions on this immutable premise of the extreme right.

No other issue mattered as much. Not war, not attacks on the environment, not capital punishment or gun control, not economic policies that marginalized large groups of people, not erosion of the common good, not the vast imponderables of a Trump presidency. None of it mattered, especially in many Catholic circles, as long as that "pro-life" standard of opposition to abortion was maintained.

It took Democrats a bit longer to be completely overwhelmed by their extreme wing, but it finally happened. They've become abortion fundamentalists, extremists from the left, holding rational political discourse hostage to their own immutable demands that to be welcome in the party, one must pledge allegiance to the doctrines of NARAL (National Abortion Rights Action League) Pro-Choice America. It happened last weekend when newly elected Democratic National Committee Chairman Tom Perez did a U-turn from his initial rational statement about his support for Heath Mello, Democratic mayoral candidate in Omaha, Nebraska.

Mello's sin against abortion rights orthodoxy was his support for a law in the Nebraska legislature that required doctors to inform women seeking an abortion that they had a right (not that they are required) to receive an ultrasound beforehand. Anyone who has seen the startling clarity and detail of today's sonograms might understand NARAL's fear of what such images might mean for someone considering an abortion. If they were actually pro-choice advocates, they would applaud a state's efforts to provide (not require use of) every tool for making a sound decision.

At first, Perez welcomed a diversity of views within the party, but after a withering attack by NARAL's president, Ilyse Hogue, abortion on demand became a party "nonnegotiable."

Perhaps it is merely indicative of how upside down our politics have become that Vermont Sen. Bernie Sanders, so often referred to as the radical in the mix, was the voice of reason in this case. "If you have a rally in which you have the labor movement and environmentalists and Native Americans and the African-American community and the Latino community coming together saying, 'We want this guy to become our next mayor,' should I reject going there to Omaha? I don't think so. It was a great rally, and I hope very much he wins.'"

He was later joined by Massachusetts Sen. Elizabeth Warren who, though strongly pro-choice, said she respected that not everyone in the party felt that way. She said she would try to persuade them otherwise but would not exclude them because "that's just how it is with Democrats."

That's certainly how it ought to be.

Perhaps Sanders understands that the NARAL's exclusionary tactics hardly befit the "Unity Tour" he and Perez were undertaking. Perhaps he realizes, too, that abortion rights purity in the extreme is as destructive and toxic to our politics as has been the exclusionary anti-abortion politics of the extreme right. Perhaps he and Warren understand better than most the diverse coalitions necessary to win an election in today's climate.

NCR has maintained editorially for decades that adherence to the church's teachings on abortion does not necessarily lead to a single public policy approach. Indeed, when some of our loudest culture-warrior bishops were using the issue to smear politicians who did not adhere to their every wish on the issue, NCR pointed out that Pope Benedict XVI, at least three times during his 2008 visit, presided at Masses during which Communion was distributed to high-profile pro-choice Democratic and Republican politicians. We regularly have criticized the U.S. hierarchy for seriously shortchanging everything else on the social justice agenda for one-issue politics that have bankrupted them of political capital and accomplished little else.

NCR has also reported that St. Pope John Paul II during the Jubilee Year 2000 personally administered Communion several times, publicly, to Rome's pro-choice mayor. He also distributed the Eucharist to Britain's then Prime Minister Tony Blair, in John Paul's private chapel, at a time when Blair was both pro-choice in his politics and an Anglican.

The point is, to make one's public policy position on abortion the litmus test in either direction and to condition party membership and/or church membership on an abortion position is terribly shortsighted. To cut off any disagreeing conversation with an absolutist requirement guarantees only continued political dysfunction and gridlock in a two-party system that has lately been most successful in growing the number of independents.

For decades, polls have shown that the vast majority of voters — those inhabiting the broad space between the extremes — would welcome public policy more restrained than abortion on demand in every circumstance and less restrictive than a total ban. Though those in the middle are far greater in number than either extreme, their views have no chance of surfacing in an arena polarized by religiously infused dogmatists on one end and industry-fueled zealotry on the other. The only winners, election cycle after election cycle, are the extremes, who make big paydays out of the fight.

If Perez's intolerance is the new marker for Democrats, he has shamefully capitulated to his party's version of the tea party and the power of the money they bring to bear, and he has driven party politics further into irrelevance.