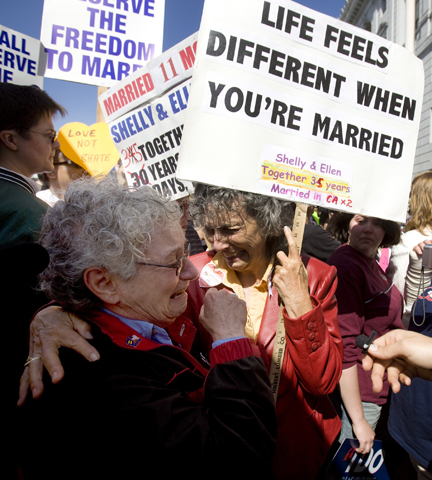 Shelly Bailes and Ellen Pontac react after hearing that California's Supreme Court upheld a ban on same-sex marriage in May 2009 in San Francisco. (CNS/Reuters/Kimberly White)

The church's problem with the issue of homosexuality, claims New York Cardinal Timothy Dolan, stems from lousy marketing, that most secular undertaking of the materialist culture. The problem, he asserted, is not in the church's teaching, but in how it has been sold. It's just not been made pretty enough to entice people to take it off the shelf. Hollywood and a host of other secular interests were first to place their shiny new products on the shelf.

Dolan made his comments the First Sunday of Advent to David Gregory on NBC's "Meet the Press." On the issue of gay marriage, Dolan said, "We've been out-marketed sometimes. We've been caricatured as anti-gay."

The cardinal, who lives on Madison Avenue, is within walking distance of some of the best marketers the world has ever known. If he looked to them for advice, they might suggest he begin with a focus group.

In a sense, the church has in its questionnaire preparing for the Synod of Bishops on the family (see story) a focus group study underway right now. If Catholics honestly answer these questions and bishops' staffers honestly report their answers, church officials might just learn -- among other things -- why most Catholics aren't "buying" the notion that their gay children, parents and friends are "intrinsically disordered" or suffer from a "condition."

If the church faces a marketing failure on issues of sexuality, the failure is in listening to its people. In recent years, the U.S. bishops have been deaf to the people of the church -- and the American voters -- on the issue of same-sex marriage. When it comes to contraception and divorce and remarriage, the church has tuned out what the faithful have been saying for 50 years. The church's teaching on sexuality is unpersuasive because the church advances teachings that actually reduce human sexuality and sexual activity to its most banal, utilitarian and mechanistic level, detaching it from the deepest possibilities of genuine human intimacy.

They've detached it from human experience, and according to sociologist William D'Antonio, whose life's career has been studying Catholics, "Lived experience is trumping abstract teaching. Wins it all the time."

Official teaching on contraception has been so widely dismissed in practice, one wonders it even comes up in conversation. The same is true for divorce and remarriage.

The same is quickly coming true on the topic of homosexuality, because among Catholic parents who know their children as all manner of things -- curious, funny, loving, mischievous, talented, gracious, annoying, musical, athletic -- all the things that parents revel in and come to love, some are also coming to know their children as gay. Thank God that today most parents are not cowering before a catechism characterization of their children and sending them off in a panic to a Courage meeting to be remade into something more acceptable.

We dare suggest that some of the Catholic faithful, particularly the family and friends of gay, lesbian, bisexual or transgender persons, might be a bit further down the road in loving as God would have us love, that they might understand Pope Francis' teaching about encounter to a greater degree than many of us.

Perhaps in his wandering among the sheep in Buenos Aires, Argentina, Francis encountered gays and their parents, and perhaps that is why today he can say, in answer to questions: "When I meet a gay person ... if they accept the Lord and have goodwill, who am I to judge them? They shouldn't be marginalized. The tendency [to homosexuality] is not the problem ... they're our brothers."

On another occasion, when asked if he approved of homosexuality, he explained: "I replied with another question. 'Tell me, when God looks at a gay person, does he endorse the existence of this person with love, or reject and condemn this person?' We must always consider the person. Here we enter into the mystery of the human being."

Dismissing the lack of acceptance of church teaching as a marketing failure is an insult to the very idea of teaching and certainly to gays and lesbians. It walks, in search of a sound bite, right past the mystery of the human being.

Dolan promised to keep up the battle against gay marriage, all the while, we presume, trying to convince the world of the popularized notion that the church can simultaneously hate the sin and love the sinner. As if the human mystery can be bifurcated and compartmentalized into portions lovable and despisable.

Should the cardinal want respite from the fight, he might take an evening or two and meet with some gay Catholics and their parents. Ask them to tell their stories, ask them why they stay in the church, ask them how they pray, what they hold as their hopes and dreams. Really listen, maybe even make allowance for certitude to melt a bit.